At present, nearly 700 million individuals around the world reportedly suffer from a range of mosquito-borne diseases, including Zika, dengue fever, and West Nile, which cause around 1 million deaths worldwide. These alarming numbers and consistent rise in the number of individuals suffering from mosquito-borne diseases, particularly in developing regions of the world, has increased the demand for body-worn insect repellents. In addition, several species of insects have increasingly become more resistant to conventional parathyroid-based repellents due to which, research and development activities have gained considerable momentum across the body worn insect repellent market.

In the current scenario, a great amount of emphasis is being given to the production of body worn insect repellents that are plant-based or based on naturally occurring compounds to minimize the negative effects of these products on the environment. Although plant-based repellents are gaining considerable popularity worldwide, manufacturers are largely focusing on addressing the manufacturing challenges pertaining to transforming a natural plant oil to a commercial product. Diethyl-meta-toluamide (DEET) is one of the most popular and widely used insect repellents across the world. However, the trend is likely to change during the forecast period, as research activities are in full swing to launch environment-friendly and effective insect-repelling solutions and products. 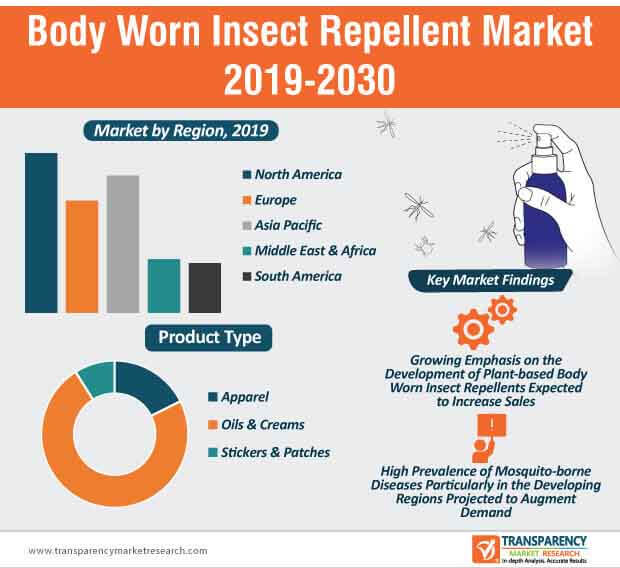 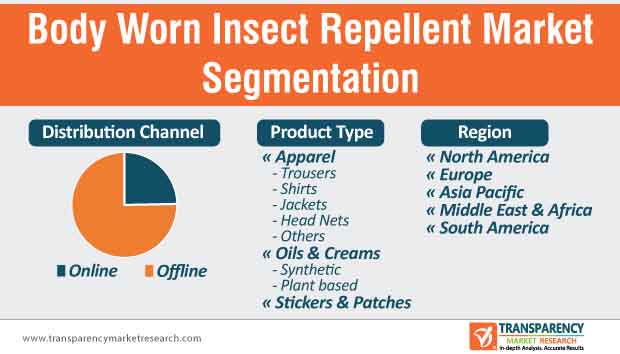 Due to the rising consumer demand for DEET alternatives, several new products have entered the body worn insect repellent market. For instance, in 2019, a lotion derived from Shea butter and DEET insect repellent was developed by Maïa to combat malaria– one of the most lethal parasitic diseases worldwide. The newly developed innovative product has gained considerable traction over the past few months and the trend is likely to continue. Manufacturers are also investing resources to formulate long-lasting, cost-effective, and highly effective repellents.

As the COVID-19 pandemic continues to spread like wildfire across the different regions of the world, growing health-related concerns among consumers could potentially increase the demand for body-worn insect repellents. Although there is no evidence of the COVID-19 virus being transmitted via insects, as a safety measure, consumers continue to purchase repellents to stay safe. The demand for mosquito repellent wristbands is on the rise mainly in developed regions of the world amid the COVID-19 pandemic. In addition, several companies are urging government authorities to include body worn insect repellents in the list of essential items due to the spike in the number of malaria and dengue cases.

Stuck in a neck-to-neck competition with other brands? Request a custom report on Body Worn Insect Repellent Market

The global body worn insect repellent market is expected to witness a steady growth rate during the forecast period. The market growth can be attributed to a host of factors, including rise in the number of mosquito-borne diseases worldwide particularly in developing regions, growing demand for plant-based insect repellents, research & development activities, and growing awareness regarding the benefits of using insect repellents. Companies in the body worn insect repellent market should focus on expanding their product portfolio and launch innovative products that are long lasting, natural, and cost-effective. The Asia Pacific will dominate the global market in terms of market share and value during the assessment period, due to the high prevalence of mosquito-borne diseases in the region and growing number of government initiatives to combat mosquito-borne diseases.

Key indicators of market growth, which include value chain as well as supply chain analyses, and Compound Annual Growth Rate (CAGR), are elucidated in TMR’s study in a comprehensive manner. This data can help readers interpret quantitative growth aspects of the global body worn insect repellent market during the forecast period.

The study discusses the underlying trends and impact of various factors that drive the global body worn insect repellent market, along with their influence on the evolution of the market.

This report answers these questions and more about the global body worn insect repellent market, aiding major stakeholders and key players in making the right decisions and strategizing for the advancement of their business.

A unique research methodology has been utilized by TMR to conduct comprehensive research on the growth of the global body worn insect repellent market and arrive at conclusions on the future growth prospects of the market. The research methodology is a combination of primary and secondary research, which helps analysts warrant the accuracy and reliability of the drawn conclusions.

The report on the global body worn insect repellent market provides information on the basis of product type, distribution channel, and region.