Advancements in oncology settings are improving patient quality of life. Due to effective biosimilars, healthcare providers are able to receive better outcomes in several cancer patients who can opt for convenient treatments such as a painless injections rather than receiving a lengthy chemotherapy session. Patent expiry of biologic drugs for the treatment of cancer are creating a scope for incremental opportunities. As such, oncology indication segment of the biosimilars market is estimated to reach a value of ~US$ 21.1 Bn by the end of 2027.

Since the oncology segment is likely to witness aggressive growth during the forecast period, companies in the biosimilars market are increasing efforts to introduce improved formulations of biologic products. Apart from biosimilars, companies are increasing the production of epoetins and filgrastims for the treatment of chemotherapy-induced neutropenia. Healthcare companies are also developing biosimilars to Rituximab, since the novel drug is FDA-approved. Biologic drugs similar to Rituximab are creating incremental opportunities for companies, as these drugs are being increasingly used in the treatment of non-Hodgkin's lymphoma and chronic lymphocytic leukemia. 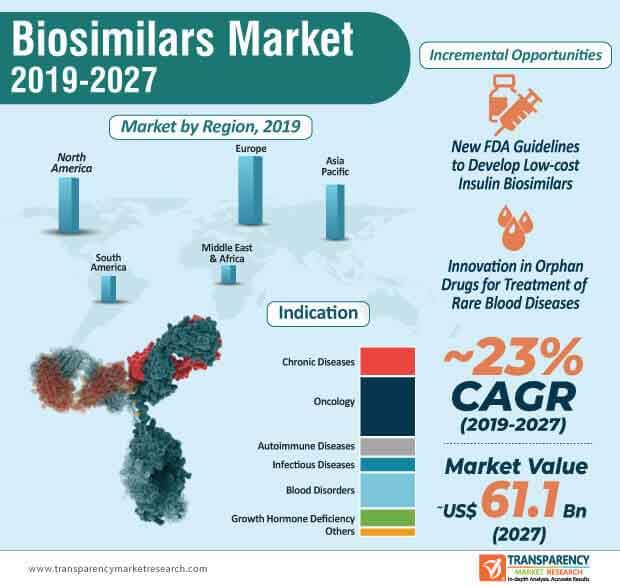 Innovations in monoclonal antibodies (mAbs) are expected in the biosimilars market landscape in the near future. Healthcare companies are increasing their efficacy in hybridoma-based technology to develop improved mAbs with the help of genetic engineering. Monoclonal antibodies are a key source of revenue in the recombinant glycosylated proteins segment. As such, among product types, the recombinant glycosylated proteins segment of the biosimilars market is estimated to reach a value of ~US$ 23.5 Bn by 2027. Hence, manufacturers are aiming at the integration of humanized mAbs based on grafting the murine complementary regions into the human immune globulin backdone.

Monoclonal antibodies are being pervasively used for the treatment of cancer, diabetes, and autoimmune diseases. Manufacturers in China are facing fierce competition to gain approvals for biosimilar mAbs. For instance, in December 2019, Shanghai Henlius Biotech - a producer of advanced mAb products, announced the approval of China’s first-of-its-kind Rituximab biosimilar HLX01 for the treatment of non-Hodgkin’s lymphoma.

Companies in the biosimilars market are tapping into opportunities in orphan biosimilars. Biosimilars are gaining popularity as affordable treatment options for patients in need of biologics. Due to the high prevalence of rare diseases, companies have a renewed purpose to steer innovation in biosimilars. Thus, manufacturers are increasing efforts to fulfill unmet needs of patients with rare diseases by increasing the availability of low-cost biosimilars.

Development of new orphan biosimilars is in the pipeline for most healthcare companies. They are increasing efforts to gain approvals on new biologic products. For instance, Amgen - a U.S. multinational biopharmaceutical company, revealed that the company has gained approval for its biosimilar medicine, which is a version of Johnson and Johnson/MRK’s Remicade (infliximab).

Manufacturers in the biosimilars market are commercializing orphan biosimilars for the treatment of rare blood diseases involving blood clotting and impaired bone marrow function. Hence, companies are increasingly focusing on the development of biosimilars for blood disorders, since the segment is anticipated for exponential growth during the forecast period.

Currently, the biosimilars market in North America is projected for exponential growth during the forecast period. The U.S. being one the most developed economies in North America is faced with several restraints in the current developmental programs for protein products, including insulin, due to stringent and time-constrained regulatory norms imposed by the FDA. Hence, manufacturers in the biosimilars market are increasing R&D activities to produce affordable biological products before the 2020 deadline issued by the FDA.

Insulin is an important recombinant non-glycosylated protein that is creating incremental opportunities for companies in biosimilars market, due to high prevalence of diabetic patients. 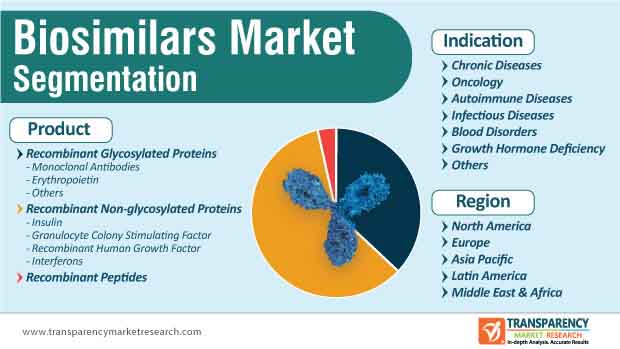 The biosimilars market is expected to expand at a high CAGR of ~23% during the forecast period. Manufacturers are gaining business stability by increasingly innovating in biosimilars catering to cancer patients and are driving down costs of medicines.

One of the biggest barriers in the growth of orphan biosimilars is the long clinical development pathway due to evidence requirements for rare disease drugs. Hence, manufacturers are focusing on analytical similarity with originators to develop approval-worthy biosimilars. Companies should invest in developing economies of Asia Pacific such as India, since the country is an emerging hub for biologics and biosimilars. India’s biopharma sector is aiming to emulate the global standard in generic drugs and is increasing efforts to improve access to affordable biosimilar products.

Biosimilars Market - Scope of the Report

For reading comprehensibility, the report has been compiled in a chapter-wise layout, with each section further divided into small sections. The entire report comprises an exhaustive collection of graphs and tables that are appropriately interspersed in the entire compilation. Pictorial representation of actual and projected values of key segments is visually appealing to readers. This also allows comparison of the market shares of key segments in the past and at the end of the forecast period.

The report analyzes the biosimilars market in terms of product, indication, and region. Key segments under each criteria have been studied at length, and the market share for each of these at the end of 2027 has been provided. These valuable insights would help market stakeholders in making informed business decisions for investments in the biosimilars market.