The Food and Drugs Administration (FDA) in the US has been at the forefront of growth within the global oncology biosimilars market. Approval of several biosimilars by the FDA have been helpful for research entities and organizations. Post 2015, FDA has been actively approving oncology biosimilars, a trend that is expected to gather momentum in the times to follow. filgrastim-sndz (Zarxio) and Bevacizumab-awwb (Mvasi) are two important biosimilars that were lately approved by the FDA. It would be interesting to see the impact of increased pace of approvals on market maturity.

In this preview, several trends, opportunities, and segments pertaining the global oncology biosimilars market have been discussed. The presence of a seamless medical industry that focuses on developing treatment lines for cancer is an important consideration from the standpoint of market analysis. In addition to this, several University scholars have tasted success in developing possible treatment lines for cancer. TMR predicts that the global oncology biosimilars market would grow at a humongous CAGR of 27.5% over the period between 2017 and 2025. The voluminous growth rate can be attributed to investments made in cancer research and analysis. Furthermore, the total worth of the global oncology biosimilars market is set to touch US$17,478.2 mn by 2025-end. 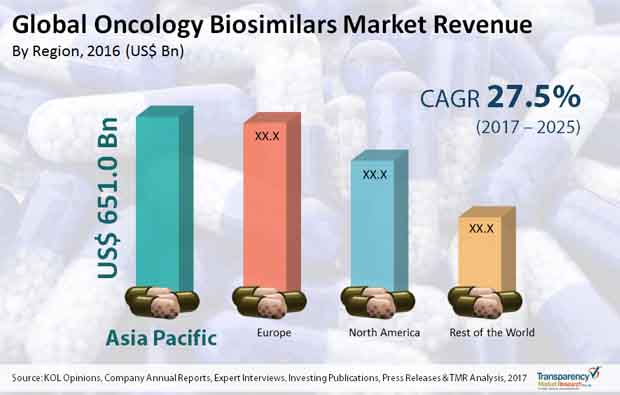 Rising incidence of various types of cancers plays an integral role in driving sales across the global oncology biosimilars market. Clinical research related to oncology has gathered momentum in recent times, and this trend has reflected in the development of several distinct drugs. Research related to leukaemia has especially attracted increased attention from medical researchers. Considering the factors mentioned above, it is safe to predict that the global oncology biosimilars market would gain momentum in the years to follow. Advancements in drug development and analysis of active ingredients in drugs is also an important consideration from the perspective of market growth. Biologic drugs are gradually becoming an important component of the pharmaceutical industry. These drugs are poised to account for a major share of drugs mix produced by the industry.

On the basis of regions, the global oncology biosimilars market can be segmented into Latin America, North America, Europe, Asia Pacific, and the Middle East and Africa. Investments in cancer research, especially across the UK, are central to the idea of market growth in Europe. Recently, scholars from Cardiff University discovered a potential cure for bodily cancers. The North America oncology biosimilars market is set to expand as new research centers and laboratories emerge in the region.

The market for oncology biosimilars has just a few players and hence is consolidated in nature. Big shot players in the market are seen forging carefully-considered collaborations to expand their geographical footprints. A case in point is Dr. Reddy’s Laboratories, which entered into an agreement with TR-Pharm to strengthen its presence in the Middle East. According to the deal, TR-Pharm is required to commercialize Dr. Reddy’s three biosimilars in Turkey.

A noticeable trend in the market for oncology biosimilars is prominent pharmaceutical companies forming strategic alliances with well-known generic manufacturers to formulate biosimilars. One example in this direction is Biocon collaborting with Mylan to develop a strong portfolio of biosimilars, including monoclonal antibodies and recombinant proteins.

Depending upon the class of drugs, the global market for oncology biosimilars can be divided into monoclonal antibody, G-CSF, and hematopoietic agents. The segment of G-CSF among them currently pulls in maximum revenue. Patent expirations of reference biologics is also serving to drive growth in the market. In the near future too, the segment is expected to generate maximum revenue on the back of robust pipeline of oncology biosimilars.

Cancer is said to be the second-leading cause of death worldwide. What makes it particularly dreadful is the fact that there are limited therapies for it and those are usually very expensive. However, emergence of biologics for their treatment has reduced the cost burden on patients sufficiently. Biosimilars are molecules that match the efficacy and potency of the original reference biologic and yet are cheaper. In addition, they are easy to manufacture. All the aforementioned coupled with the expiration of original reference biologic is upping the demand for oncology biosimilars.

Pharmaceutical companies across the world are focused on formulating biosimilars and generic medicines to deal with cancer at various stages. This is expected to benefit the market for oncology biosimilars in the near future.

However, the complicated infrastructure required for the development of biosimilars and the lengthy approval process is posing a challenge to the market.

The global oncology biosimilars market can be classified into blood cancer, breast cancer, non-small cell lung cancer, neutropenia, colorectal cancer, and others based on the disease indication. The segment of blood cancer can be further divided into non-Hodgkin’s lymphoma and leukemia. The segment of neutropenia accounts for a leading share in the market at present. One of the reasons behind it is the approvals won by many manufacturers in Europe to manufacture filgrastim and Peg-Filgrastim.

North America, Asia Pacific, Europe, and the Rest of the World are some of the key regions in the global market for oncology biosimilars that have been studied in the report. Asia Pacific, among them, holds a considerable share in the market. This is mainly because the low cost biosimilars are perfectly suited to the budgets of the people in the region who do not have the means to spend on expensive drugs.

Biosimilars cost much less than the original reference biologics. Apart from that, easy availability of safe cancer medications in retail outlets along with focus of leading players on carefully-considered alliances in the region is also helping the market.