The use of nuclear medicine for research and disease treatment dates back to the first half of the 20th century, when they began to be used as tracer elements. Subsequent developments in nuclear medicine and molecular imaging have led to a variety of radiopharmaceutical substances being used for the diagnosis of different diseases. Nuclear imaging modalities such as positron emission tomography (PET) and single-photon emission computerized tomography (SPECT), which use these radiopharmaceuticals, are now being offered as a routine option in the diagnosis and treatment of diseases. With benefits such as better quality of images and precision in the detection of illnesses made possible, particularly in the early detection and diagnosis of cancers, nuclear imaging as a modality within the biological imaging reagents market has been gaining traction in recent years. This modality in the global biological imaging reagents market was valued at ~US$ 2.3 Bn in 2018 and is expected to expand the most among all, at a CAGR of ~9% during the forecast years. 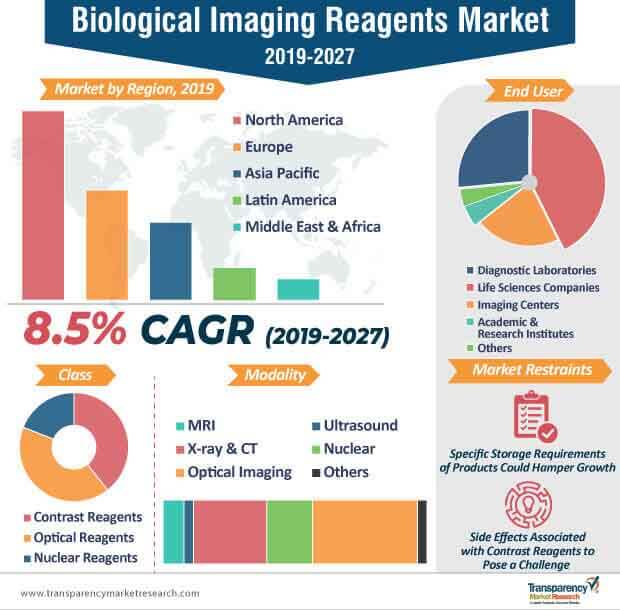 The obvious advantages of multimodal imaging, or multiplexed imaging, over single modality imaging, such as better visualization and more precise images, have contributed significantly to their popularity. The introduction and incorporation of newer technologies and tools, particularly that use multiple imaging techniques, have gained purchase in the larger imaging landscape. For instance, the increased use of PET-SPECT hybrid and PET-MRI imaging systems globally, due to their many benefits, has contributed significantly to the expansion of the biological imaging reagents market.

Manufacturers in the global biological imaging reagents market, focusing on these multimodal techniques, are likely to witness increased potential in the field of research and drug discovery.

The larger imaging landscape has not been immune to the pervasive influence of technology, which has not just caused the industry to progress by leaps and bounds with the development of multimodal imaging techniques, but has also resulted in better prospects for standardized imaging. For instance, the incorporation of AI into molecular imaging is becoming increasingly popular, as the potential for AI to improve diagnostic accuracy is vast, and is only beginning to be explored. With these advancements being incorporated into existing imaging technologies, it has had a significant positive impact on the growth of the biological imaging reagents market.

Developing Regions to Offer Opportunities Due to Increasing Incidence of Illnesses

In 2018, the developed markets of North America and Europe accounted for over two-thirds of the total share in the global biological imaging reagents market, by revenue. This is likely to continue throughout the forecast period, with both, short- and long-term predictions for these regions remaining the same. This can be attributed to the sheer number of tests being performed in these regions, coupled with increased awareness and concern for early stage disease detection.

However, there has been the rising incidence of chronic diseases and illnesses in developing regions such as APAC and Latin America, pushing for the rapid growth of these regional markets. Expected to register value CAGRs of ~9% in both regions, these two markets are likely to expand to twice their size by the end of the forecast period. This can also be credited to the improvement of healthcare infrastructure in these regions, and players’ increased focus on research & development activities. Manufacturers in the biological imaging reagents market are looking to make inroads into these regions to expand their geographical reach and strengthen their global standing in the process.

The global biological imaging reagents market is considered to be moderately consolidated, with tier-1 players occupying a larger share of the landscape. These players are increasingly focusing on mergers and acquisitions to consolidate their position in this highly competitive landscape. For instance, in April 2019, PerkinElmer, Inc., a major player in the market, acquired Cisbio Bioassays – a leading life science company.

Players are also increasingly focusing on new product development as a strategy to widen their global footprint. An example of this strategy is, in August 2019, Bracco S.p.A. received FDA approval for -Varibar ® Thin Liquid (barium sulfate) for oral suspension, for the detection and assessment of the type and severity of swallowing disorders. 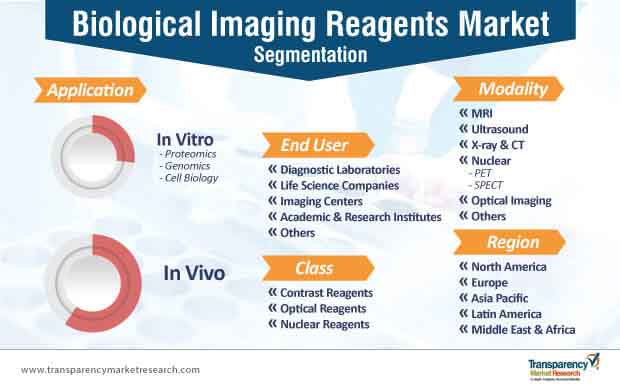 The global biological imaging reagents market is set to grow at a robust pace during the forecast period, due to the high prevalence of chronic illnesses, globally, and the consequent rise in diagnostic procedures for their detection. According to analysts at Transparency Market Research, players in this market should focus on products that can be employed in multimodal imaging for maximum gains in the near future. Manufacturers in the biological imaging reagents market are focusing on R&D and partnerships with academic institutes to maximize their gains during the forecast period.

Regional markets in APAC and LATAM in the global biological imaging reagents landscape are expected to grow the fastest during the forecast period. These regions offer lucrative prospects for manufacturers to make inroads to strengthen their regional and local presence.

With technology moving at such a rapid pace, and the demand for better and more precise images taking precedence, the future is set to be rewarding for manufacturers of biological imaging reagents, looking to leverage technological advances into imaging solutions and their manufacturing process.

The report includes an elaborate executive summary, along with a snapshot of the growth behavior of various segments and sub-segments included in the scope of the study. Furthermore, the report sheds light on the changing competitive dynamics in the global biological imaging reagents market. These indices serve as valuable tools for existing market players as well as for entities interested in participating in the global biological imaging reagents market.

The comprehensive report on the global biological imaging reagents market begins with an overview of the market, followed by the scope and objectives of this study. Following this, the report provides detailed explanation of the objectives behind this study, regulatory scenario, technological advancements, and disease prevalence rate of different diseases and conditions.

For reading comprehensibility, the report has been compiled in a chapter-wise layout, with each section divided into smaller sections. The entire report comprises an exhaustive collection of graphs and tables appropriately interspersed in the entire compilation. Pictorial representation of the actual and projected values of key segments is visually appealing to readers. This also allows the comparison of the market shares of key segments in the past and at the end of the forecast period.