As convenience and safety takes center stage, cordless power tools have been gaining popularity and user acceptance in recent years, in the manufacturing industry. They have improved the versatility of assembly fastening tools as well, by focusing on safety and flexibility, over their corded cousins, making them function without controllers, and thereby, improving operational efficiency. Increasing investments toward the R&D of cordless tools by players in the market, to cater to the ever-evolving needs of the manufacturing industry, have led to a significant positive impact on the global assembly fastening tools market. In 2018, although corded tools accounted for over-two third of the market revenue share, this number is expected to come down as the popularity of cordless tools rises. Cordless tools are expected to account for one-third of the global market share by revenue by the end of the forecast period.

The preference for cordless tools over corded ones, owing to the many advantages that they offer, has opened up several opportunities for manufacturers in the global assembly fastening tools market, as they continue to improve tool design, safety, and efficiency. They are being increasingly adopted across several industries, including automotive, aerospace, semiconductors, and heavy equipment. 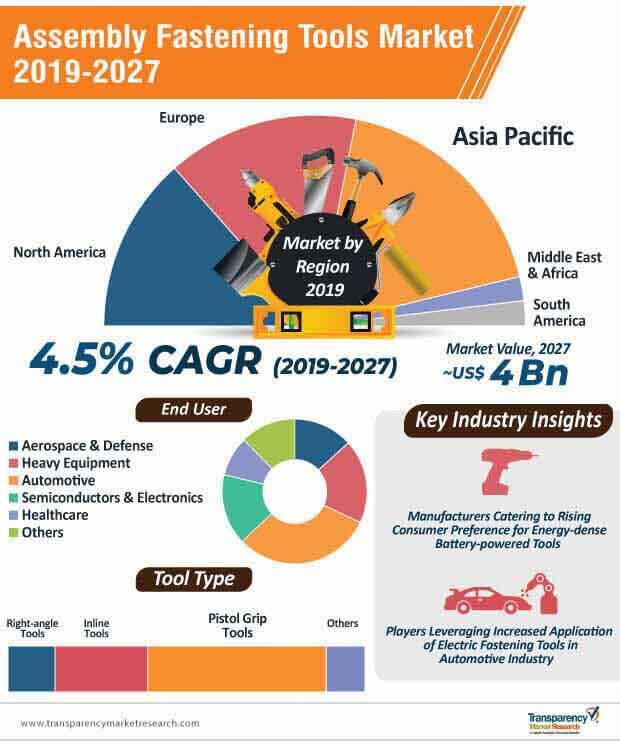 The evolution of the cordless assembly fastening tools market space has also been influenced by the development of advanced power sourcing technology, addressing design challenges, and improving the proficiency of the product. The use of lithium ion batteries that provide increased run-time and performance is also gaining acceptance as against conventional batteries, which have to be traded frequently during the course of use. R&D in energy-dense batteries has led to newer battery designs and energy-dense batteries to keep pace with the requirements from several end use industries.

For instance, in 2018, Stanley Black & Decker, a major player in the global market, released a new battery design called the Flexvolt™, which changes voltage based on the requirement of the tool being used.

Smart tools that are all connected to the Industrial Internet of Things (IIoT), which were once thought of as being very far into the future, have quickly become a reality. These smart tools are now being used to measure and store data, improving the efficiency of operations and reducing the rate of failures. They offer data from several data points, and the information provided can be used to significantly improve quality and precision, in a customized manner.  These factors have contributed significantly to the growing popularity and widespread adoption of smart tools for the creation of a lean production environment – a tenet of Industry 4.0.

Industry 4.0 has fed the continual rise in the pace of manufacturing in recent years. Assembly fastening tools have also advanced and are increasingly becoming versatile, with even simpler tools offering exceptional precision, accuracy, and traceability. Manufacturing, as a whole, is now placing a premium on improved output, and assembly fastening tools and solutions are no exception.

Product innovation in the assembly fastening tools market is now beginning to include those that offer two-way communication as a standard, to ensure faster data sharing, error detection, and the like - all aimed at improving operational efficiency on the factory floor.

However, because these structure adhesives may not find application in metal joining, their impact is negated by the versatility of fastening, thereby contributing to the growth of the assembly fastening tools market. 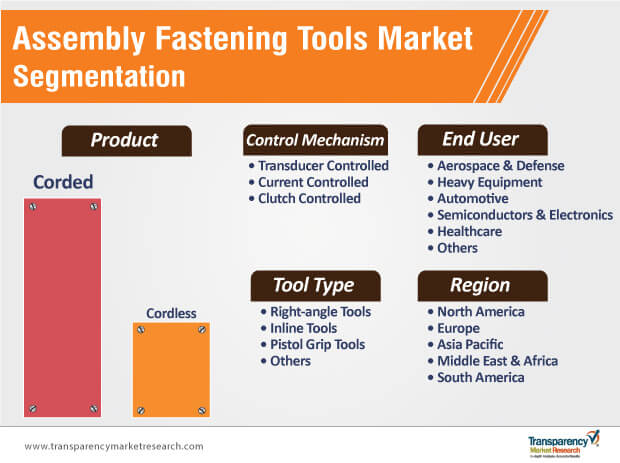 Stuck in a neck-to-neck competition with other brands? Request a custom report on “Assembly Fastening Tools Market”

The global assembly fastening tools market is set to grow at a decent pace over the forecast period of 2019-2027, as cordless tools and electric assembly fastening tools are gaining popularity across end-use industries. According to analysts at Transparency Market Research, manufacturers looking at incorporating energy-dense batteries into their products for better product efficacy, and directing their research toward 'smart tool' innovation, are likely to maximize their benefits during the foreseeable future.

The regional markets of APAC and Europe, in the global assembly fastening tools landscape, are expected to grow substantially during the forecast period. This can be attributed to the presence of an established manufacturing industry in these regions, which is set to drive the growth of their market. These regions offer profitable prospects for players looking to strengthen their presence in the overall market space.

Availability of Substitutes Such as Adhesives and Welding a Major Challenge

Key providers of assembly fastening tools, such as Ingersoll-Rand Plc, Stanley Black & Decker, Inc., APEX Tool Group, Atlas Copco AB, and Estic Corporation are focusing on consistent investments in R&D and new product development to offer a diversified range of products and services to clients across the world. Some other key developments in the global assembly fastening tools market are: