Albumin is a water soluble globular protein produced in the liver. It accounts for 50% of blood plasma proteins. These play a vital role in regulating blood volume and act as transporters for molecules such as few hormones, bile salts, and ions. Albumin is commonly used as blood volumizer in rare diseases, burns, shocks, liver conditions, and other blood loss trauma and surgeries. However, usage of albumin as multifunctional excipient is increasing due to rise in consumption for applications such as drug formulation, vaccines, drug discovery, culture medium, stabilizing agent, and diagnostics. The global albumin (as excipient) market was valued at US$ 750 Mn in 2017 and is anticipated to reach US$ 1200 Mn by 2026 at a CAGR of over 5.0% from 2018 to 2026. Grant of regulatory approvals and trials coupled with subsequent launch of albumin-based products is expected to boost the growth of the market during the forecast period. For instance, in May 2017, China’s Food and Drug Administration granted approval to clinical trials of human blood albumin produced from transgenic rice seeds. 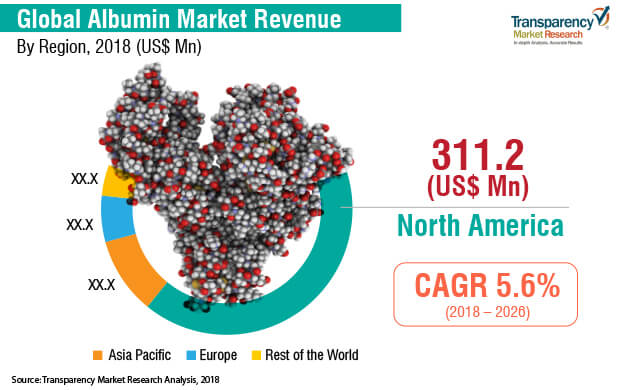 Increase in usage of albumin as multifunctional excipient, shift toward usage of recombinant albumin, and grant of regulatory approvals are the key factors driving the market. However, high cost and expertise required to set up production plants and stringent regulatory criteria restrain the market. Emerging markets such as India, China, Brazil, and South Africa present significant opportunities in the albumin as an excipient market owing to growing contract research manufacturing. Moreover, technological developments in drug formulation & drug delivery and increase in access to technologies such as use of albumin in cell culture media present lucrative opportunities for investors. Hence, investments by manufacturers in these developing markets, increase in contract research manufacturing, and rise in demand and awareness among the end-users are expected to boost the growth of the albumin as an excipient market.

The global albumin (as excipient) market has been segmented based on product, application, end-user, and region. In terms of product, the human serum albumin segment is anticipated to account for major market share of 80% in terms of revenue during the forecast period. Growth of the segment is attributed to increase in prevalence of life-threatening disorders and conditions, especially liver diseases, infections, and cardiac surgeries leading to hypoalbuminemia. Other factors driving the segment include rise in adoption of albumin products and increase in usage for non-therapeutic applications across the world. Based on application, drug delivery is expected to be the most attractive segment during the forecast period. Collaboration between pharmaceutical and biotechnology companies for the use of recombinant albumin-based drug delivery systems is likely to boost the growth of the segment. In terms of end-user, the pharmaceutical & biotechnology industry segment is expected to dominate the market from 2018 to 2026. The segment was valued at US$ 500 Mn in 2017. Rise in research and developmental activities for the development of technologically advanced products and increase in government funding are attributed to the growth of the segment.

Geographically, North America and Europe are projected to be highly attractive markets for albumin as excipient during the forecast period. Rise in investments in life sciences by a large number of biopharmaceutical companies and research institutes is expected to boost the market in the regions during the forecast period. Demand for albumin is high in countries such as India and China. However, uptake of these therapeutics is low due to lack of awareness about these products and their therapeutic uses. Hence, awareness programs conducted by organizations such as PPTA, which include International Plasma Awareness Week, to help increase awareness about plasma donation and the different plasma protein therapies available along with their potential uses are expected to increase the uptake of these therapeutics in treating various conditions.

This report analyzes the global albumin (as excipient) market in terms of its current and future business prospects. Grant of regulatory approvals and subsequent launch of albumin-based products, increasing participation from the pharmaceutical industry in the development and manufacturing of biopharmaceuticals, along with rise in research & development expenditure and increase in consumption of albumin are the key factors driving the growth of the global albumin (as excipient) market. Albumin serves as an important ingredient for formulated proteins and as a component of culture media and other biotech products, ultimately acting as a multifunctional excipient. Use of a well-characterized multifunctional excipient eliminates the time consumed during characterization of each excipient for different functions. This reduces the associated cost, shortens the registration process, and creates a faster route toward the market. Other factors, such as, decrease in issues with variability in quality, lower lot-to-lot and supplier-to-supplier variation, and reduction in the time involved in formulation optimization also drive the demand for albumin as excipient.

This report on albumin (as excipient) market comprises an elaborate executive summary, which includes a market snapshot, providing information on the various segments of the market. It also provides information and data analysis of the global market with respect to its segments based on product, application, end-user and geography. A detailed qualitative analysis of drivers, restraints, and opportunities of the market has been provided in the market overview section of the report. In addition, it comprises competitive matrix and company profiles with business overview to understand the competition in the market. The section also provides market attractiveness analysis, by geography, and market share analysis, in terms of key players, thus presenting a thorough analysis of the overall competitive scenario in the albumin (as excipient) market.

Geographically, the global albumin (as excipient) market has been categorized into four major regions and key countries in the respective regions: North America (the U.S. and Canada), Europe (the U.K., Germany, France, Spain, Italy, and Rest of Europe), Asia Pacific (India, China, Japan, Australia, and Rest of Asia Pacific), Rest of the World (Brazil, Mexico, South Africa, Saudi Arabia). Market size and forecast for each of these regions and countries have been provided for the period of 2016 to 2026, along with their respective CAGRs for the forecast period of 2018 to 2026, considering 2017 as the base year. The research study also covers the competitive scenario of the albumin (as excipient) market in these regions.

Companies Profiled in the Report

The global albumin (as excipient) market has been segmented as given below: