In recent years, the global waste to energy technologies market has been receiving great accolade. These technologies are used for generating energy from waste material and turn it into fuel. The energy produced from this procedure is similar to the one generated by burning natural gas, coal, oil, or other traditional methods. The waste to energy technologies helps in reducing the municipal solid wastes landfill by a considerable amount. It further helps in reducing the emissions of carbon dioxide from the generated waste.

Considerable rise in terms of consumption of power along with growing focus on generating energy through renewable sources of energy are projected to be the key driving factors for the overall development of the global waste to energy technologies market in the near future. This growth of the global market is also attributed to the fast paced development in the activities of urbanization and industrialization in developing economies in Asia Pacific such as China and India. Moreover, in recent years, there have been considerable rise in the levels of investments put in by the key stakeholders in the global waste to energy technologies market. This too is expected to further fuel up the development of the global market.

The leading companies in the global market for waste to energy technologies are concentrating on developing new and innovative products. The companies in the market are trying to explore new geographical segments and areas for potential revenue generation and lucrative business opportunities. The companies in the market are also expected to adopt aggressive growth strategies such as mergers, acquisitions, and joint ventures in order to stay ahead of the competitive curve. For instance, in October 2017, John Wood Group announced that the company has acquired Amec Foster Wheeler. This takeover has helped John Wood Group to bolster their portfolio in the energy business sector.

Waste-to-energy is another efficient alternative for energy production. It helps in reduction of carbon emissions and replenish fossil fuels. It is also an effective way to getting rid of trash through disposal methods, and even recovers valuable resources. Waste-to-energy holds an important role in sustainable waste management chain. 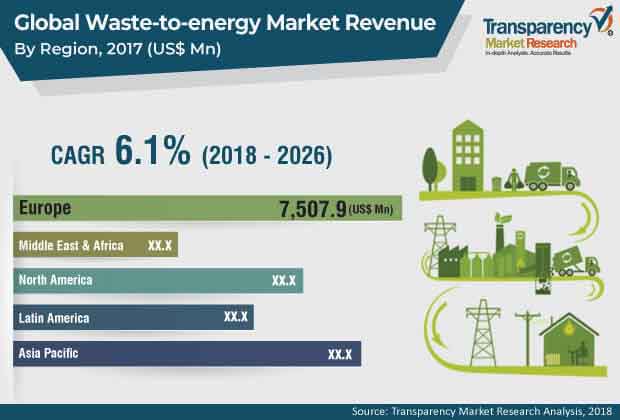 Waste to energy is achieved through esterification, thermos-chemical or bio-chemical technologies. The utilization of technologies is dependent on several factors for example, type and composition of waste, final energy form, and calorific value. The energy produced is used in applications like heat and electricity generation, mainly achieved through incineration. Moreover, transport fuel like bio-deisel, ethanol, and bio-jet fuel are extracted from waste processing. This blending of gasoline and ethanol boosts the growth in global ethanol production.

The study caters an elaborated analysis of the global waste-to-energy market on the basis of various segments as per technology, type, region, and application. On the basis of waste type, the market is divided into agricultural waste, municipal solid waste, and so on. Moreover, as per the technology, the global waste-to-energy market is segregated as biochemical and thermochemical. Application-wise, the market has been divided into heat, electricity, and so forth. These segments are studied from present as well as future point of view, both.

Several new waste-to-energy projects are being established in the world, and supporting the global energy mix consistently in coming years. Moreover, government regulations are as well furling the demand in the waste-to-energy market. Policies for example, tax credits, feed-in-tariffs, and capital subsidies are given to for waste-to-energy plants in India, the U.S., China, and nations in the EU.

A key factor responsible for pull down the growth of global waste-to-energy market is the high initial cost for constructing a waste-to-energy plant. In fact, the average time for payback of an anaerobic digestion project is above five years. This fortifies the restricting factor behind the market growth in forecast period.

Regionally, in 2017, Europe led the global waste-to-energy market. Rising initiatives by the governments, new targets regarding renewable energy, and increasing investments in biogas technology are estimated to fuel the growth of waste-to-energy market in Europe in the span of coming years. In year 2016 itself, nearly 41 new biomethane plants were established in the region. In addition, the Asia Pacific waste-to-energy market in Asia Pacific is likely to grow rapidly in the forthcoming years. In various nations in Asia Pacific, such as Thailand, India, Malaysia, and South Korea, the consumption of energy is consistently increasing. Growth in industrialization, and increasing importance of renewable source of energy is estimated to fuel the mentioned region in the forecast period.

The world is currently facing challenges arising out of shortage of conventional fossil fuels and degradation of the environment. In order to overcome these issues, renewable energy resources are being used increasingly. The need to produce energy from renewable resources has risen. Waste-to-energy (WtE) is a type of renewable energy. It is a process wherein energy is generated from the treatment of waste, thereby turning waste into a source of power generation.

The energy produced from this process is similar to that produced by using coal, natural gas, or oil. The waste-to-energy process is expected to reduce landfilling of municipal solid wastes (MSWs) by 90%, which can further reduce carbon dioxide (CO2) emissions.

Japan and Germany are major countries in terms of waste treatment for energy recovery. Japan converts approximately 65% of its waste into energy. The share of waste disposed of in landfills is nearly 3%; the rest of it is either recycled or composted. Germany is the world’s first major renewable energy economy, as it extensively uses renewable energy for power, heating, and transport. More than 120 waste-to-energy plants were operating in Germany by the end of 2016.

The report includes detailed value chain analysis, which provides a comprehensive view of the global waste-to-energy market. Porter’s Five Forces model for the waste-to-energy market has also been included to help understand the competition landscape of the market. The study encompasses market attractiveness analysis, wherein waste type, technology, and application segments have been benchmarked based on their market size, growth rate, and general attractiveness.

The study provides a decisive view of the global waste-to-energy market by segmenting it in terms of waste type, technology, application, and region/country. In terms of waste type, the market has been classified into municipal solid waste (MSW), agricultural waste, and others. Based on technology, the waste-to-energy market has been divided into thermochemical and biochemical. In terms of application, the market has been segregated into electricity, heat, and others. These segments have been analyzed based on the present and future trends. Regional segmentation includes the current and forecast demand for waste-to-energy in North America, Europe, Asia Pacific, Latin America, and Middle East & Africa.