Ethanol is one of the most commonly used alcohol that finds applications across a large number of industries. Besides forming a crucial portion of alcoholic beverages, it is also used in healthcare, scientific research, food and beverages, cosmetics, home and domestic care, and pharmaceuticals. A significant discovery of organic chemistry, ethanol is known for its properties of sterilization and hence finds prominent use in industries involving chemicals and products manufacturing.

Demand from Alcohol and Healthcare Industries Bestow Promise for the Market 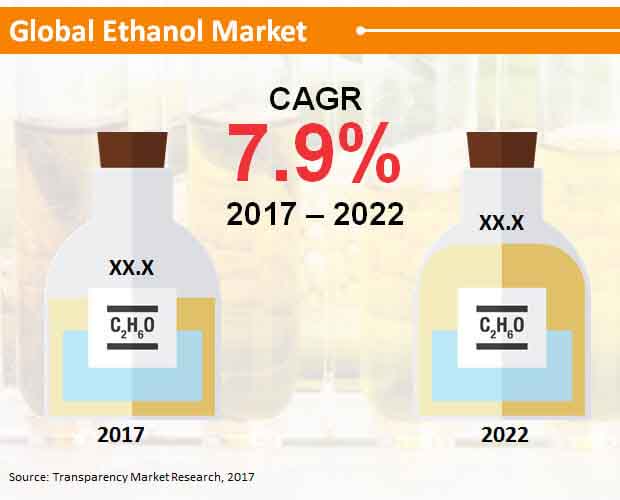 Countries in North America have well-developed infrastructure and hence the demand for ethanol is high. What’s more is that the pharmaceutical industry in the U.S. is also dominant. Since most drug manufacturing process and related research deals with microbes, it requires highly sterile environment to prevent contamination. This aspect steers growth in North America, and thus influences growth in the global ethanol market.

At the same time, players in the global ethanol market at the expanding Asia Pacific market. With developing nations like India and China increasing their thrust on advancing healthcare facilities, the demand for ethanol is predicted to shoot up. Moreover, research to develop cheaper drugs and better diagnostic and treatment techniques are also improving requirement for ethanol. As a result, demand in the global ethanol market is expected to shoot up.

The growing utilization of ethanol as a biofuel is likely to fuel growth of the global ethanol market. Another significant factor driving market growth is the increasing intake of alcoholic beverages. Both petrochemical and natural feedstocks can be utilized in the making of ethanol. Fermentation of natural sugars with yeast is done in the natural method. Because of the increase in the production of shale gas, ethylene production is rising. As oil production declines and new ethylene capacity comes online, the market is expected to become overstocked with ethylene, resulting in the stagnation of ethanol production.

Alcoholic drinks including ethanol that were once regarded a status symbol, are now gradually becoming a norm in the many households across the world. The introduction of high-end goods to the market is another major factor anticipated to drive growth of the global ethanol market. The appetite for premium offerings has been fuelled by increasing disposable incomes combined with increased awareness of ingredients.

One of the primary factors driving the market is the use of ethanol as a biofuel. The automotive sector has expanded rapidly in recent years, posing numerous challenges in terms of prevention and control of pollution. To combat the issue of increasing air pollution caused by vehicles, ethanol is added to gasoline up to a level of 10% and 15%. The inclusion of ethanol offers significant benefits in terms of cold start assistance during winter, thermal quality, and fuel economy during winter. In terms of the use of ethanol as a biofuel, Brazil and the US are regarded as world leaders.

Excessive consumption of alcoholic beverages can cause significant harm to the human body, particularly the liver, which is a vital organ that assists in the removal of toxins from the body. Chronic liver inflammation, also known as liver cirrhosis, is exacerbated by long-term alcohol intake. Sensation impairment, blurred vision, balance issues and ataxia, delayed motor responses, and memory and loss of comprehension are amongst the other side effects. Growing public awareness of these negative consequences could stifle demand, limiting development of the global ethanol market.

The global ethanol market is known for its perseverance to sustain growth and demand in challenging situations. Ethanol producers in chief locations such as the U.S. remained unaffected when the Organization of the Petroleum Exporting Countries (OPEC) strategized to snuff out competition which halted the nation’s prominent boom during the time. However, U.S. producers were still able to reach to new heights of success. In another instance, the ethanol sector continued to adopt new technologies and innovate despite the mismanagement of the renewable fuel standard (RFS) that created uncertainty.

In this report, the analysts explain some of the crucial factors of the global ethanol market that could prove to be important for ensuring a lasting progress in the industry. From segmentation to vendor landscape, the report offers a detailed study of critical aspects of the market. Buyers of the report are expected to receive a comprehensive guideline that could lead them to their peak success when operating in the market.

The world ethanol market is prophesied to be strong against tough conditions that could paralyze its growth. Despite challenging production economics due to low oil prices, ramping up of opponents against the RFS, and uncertainty because of regulatory indecision, the market survived pretty well in 2015. The year showcased the resolve and strength of the ethanol sector. Producers were able to ride out the storm with the help of the indispensable value of ethanol as a low-cost, clean octane booster and thriving export demand. In the U.S., millions of metric tons of high-protein animal feed and billions of gallons of high-octane renewable fuel were produced in ethanol bio-refineries of several states.

The international ethanol market is forecasted to be classified according to two classes, viz. type of feedstock and end use. As per the classification by feedstock, the market could see a segmentation into coarse grain-based, sugarcane-based, and wheat-based ethanol. Although there could be different markets for ethanol in terms of feedstock type, one is expected to garner a larger share in the coming years. The analysts foresee the market to be dominated by coarse grain-based ethanol, which represented a 53.0% share in 2017.

On the basis of end-use segmentation, the international ethanol market is predicted to be segregated into fuel, industrial solvents, beverages, and cosmetics.

Regionally, North America could set the tone for a staggering growth in the international ethanol market while collecting a revenue of US$48.3 bn by the end of 2022. Another attractive region for the market is prognosticated to be Europe. However, there could be other geographies such as Japan showcasing a slower growth in the near future. Asia Pacific except Japan (APEJ) and the Middle East and Africa (MEA) drew a greater revenue than Japan in 2017.