The growing relevance of cardiovascular treatment has played an integral role in driving sales across the global vascular access devices market. The presence of a stellar industry for healthcare treatments has transcended as a key driver of market demand. Intravenous devices have gained relevance across the field of cardiology, and the medical fraternity is making concerted efforts to drive sales. Medical administration necessitates the use of several integral processes including intravenous and external procedures. Considering the factors mentioned above, the total volume of revenues within the global vascular access devices market is expected to increase. High-quality catheters have played an integral role in enhancing medical intravenous treatments.

The rising incidence of cardiovascular diseases has given an impetus to the growth of the global vascular access devices market. Doctors and medical professionals concur with the usage of high-quality catheters and access devices. Advancements in healthcare and medicine are reflective of national growth and development. Therefore, state-planning authorities are investing in developing a robust infrastructure for medical treatments. Vascular access devices are amongst the most sought-after technologies within the medicine. Factor, coupled with the need for high-quality catheters, has aided market growth. The next decade would play a decisive role in defining the growth track of the global vascular access devices market.

The total value of the global vascular access devices market is slated to touch US$8.60 bn by 2024-end, rising up from a value of US$5.10 bn in 2015. The market is expected to grow at a moderate CAGR of 5.4% over the period ranging from 2016 to 2024. The growing incidence of cancerous tumours in humans has given a thrust to market maturity. In this preview, Transparency Market Research (TMR) looks into the key segments pertaining to the global vascular access devices market. Furthermore, the regional dynamics of this market have been duly explained within this market. 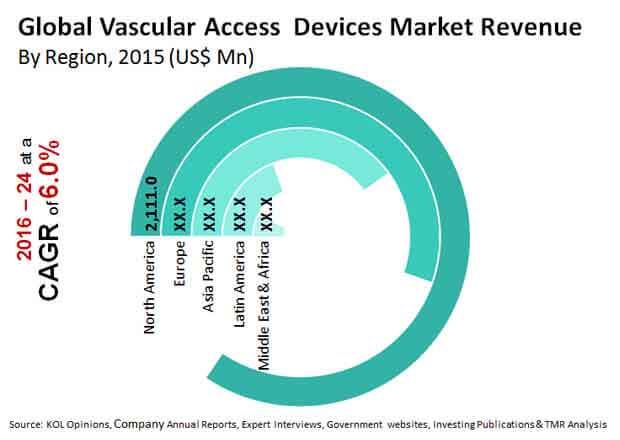 Growing Investments in the Domain of Medical Diagnosis

Several verticals within the healthcare industry have emerged as key consumers of vascular access devices. Based on end-use, the use of these devices spans across hospitals, ambulatory, surgical centers, clinics, and diagnostic centers. The medical fraternity has come to terms with the relevance of effective diagnosis in order to administer the right line of treatment. Therefore, vascular access devices are extensively used across diagnostic centers. Furthermore, importance of clinical testing and analysis has also given an impetus to the growth of the global market. Based on application, use of vascular access devices for administration of nutritional fluids has emerged as a key driver of demand.

North America Market to Grow at a Stellar Pace

On the basis of geography, the vascular access devices market can be segmented into Latin America, North America, Europe, Asia Pacific, and the Middle East. The North American market is slated to attract increased revenues in the years to follow. Subcutaneous and intravenous procedures have evolved across the US during the past decade. As medical practitioners in the region understand the relevance of intravenous procedures, the regional market shall grow at a stellar pace. Furthermore, the field of medical administration in the US has also become a matter of discussion for the healthcare sector. Growth in medical tourism has led the Asia Pacific market to tread along a lucrative pathway. Blood transfusion procedures have undergone advancements in India and China. The splendid growth of the medical fraternity of these regions has aided market growth.

Some of the leading vendors operating in the global vascular access devices market are Teleflex, Inc., B. Braun Melsungen AG, C.R. Bard, Fresenius Medical Care, and Becton, Dickinson and Company. It would be interesting to analyse the heterogeneity of processes employed by these companies towards achieveing optimal growth.

Vascular access devices are medical devices used to obtain access to the bloodstream, and are hollow and flexible tubes made of latex, silicone, and other materials, inserted into arteries or veins, to deliver medication, administer fluids and nutritional compounds, and collection of blood and blood products. The report on global vascular access devices market, analyzes the current and future prospects of the market. The report consists of an executive summary that provides information about the products, its segments and sub-segments, along with a market snapshot and comparative analysis by geography, in terms of revenue %, for 2015.

A detailed overview of market dynamics, including the drivers, restraints, and opportunities of the vascular access devices market, along with porter’s analysis, and value chain analysis, of the global market, has been provided in this report. Market revenue and volume analysis for all the above mentioned segments, and their sub segments has been provided for the forecast period of 2016-2024, considering 2015 as the base year, and 2014 as the historical year, along with compound annual growth rate (CAGR %), for the forecast period of 2016-2024. Market share estimations were based on in-depth analysis and study of products, and their features, prices etc. Pricing analysis, for every region has been provided considering the Average Selling Prices (ASP), of products, in these regions.

This report provides in-depth analysis of the vascular access devices market. The stakeholders for this report include companies involved in the manufacturing of vascular access devices. For providing a snapshot of this market to the stakeholders, executive summary section is included in this report, which summarizes the market size, trends and competition in different regions. Market share analysis among the market players is analyzed to signify percentage share of the major players operating in the Vascular Access Devices market. Furthermore, the report incorporates market attractiveness analysis by geography that depicts the most attractive and significant region in the global market in 2015.

The global vascular access devices market has been segmented as follows: