The technetium-99m market in the Middle East and Africa is expected to witness moderate growth during the forecast period from 2016 to 2026. The high installed base of gamma cameras in various countries in the Middle East, better product availability in hospitals, and a gradual rise in awareness about cancer in the region are the key factors contributing toward the growth of the technetium-99m market in the MEA. Multinational companies such as General Electric Company, Siemens Healthineers, and Sumitomo Heavy Industries, Ltd. operate in several countries in the region, focusing on addressing unmet medical needs through novel techniques.

Global companies are increasingly focusing on growing market economies (GME) and Latin America and the Middle East and Africa appear to be bright spots in the overall technetium-99m market. Key features in these regions include a largely underserved population, especially in central Africa and the Middle East, and the advent of favorable policies toward the growth of radio-diagnosis and radiotherapy. Moreover, the changing disease profile in the Middle East has led to an increased focus on cancer studies.

Hospitals Most Preferred Settings for Medical Imaging in MEA

The hospitals end-user segment accounted for the major share in the MEA technetium-99m market in 2015. Hospitals are the most preferred settings for medical imaging in countries in the Middle East due to the availability of a large number of facilities as compared to other segments such as diagnostic centers. However, the hospitals end-user segment is expected to lose a significant market share to the diagnostic centers segment during the forecast period. 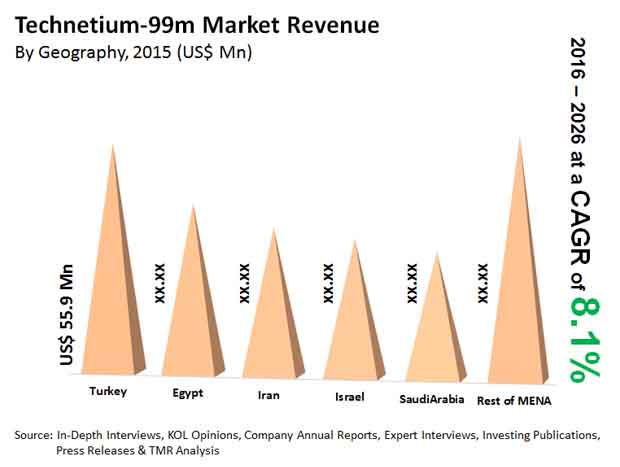 Turkey to Retain Lead in MEA Technetium-99m Market Through 2024

On the basis of geography, Turkey accounted for a 20.5% share in the MEA technetium-99m market in 2015. Turkey is expected to retain its dominance throughout the course of the forecast period owing to the presence of a large population pool affected by cancer. These patients have been availing several diagnostic solutions and this is expected to drive the technetium-99m market in the country.

Egypt is also a key market for technetium-99m in the Middle East and Africa. The growth of the market in the country can be attributed to the presence of world-class healthcare facilities, research organizations, and government institutes focused on making quality diagnosis available for every individual suffering from cancer and tumors. Egypt also has a large population base, which serves as a key factor driving the technetium-99m market.

The quickly rising pool of patients experiencing various ongoing and non-transferable sicknesses in the Middle East and Africa district and the situation is pushing government and private medical care associations to fortify its capacity of fulfilling this developing need for therapies. With conditions like diabetes, malignant growth, and heart sicknesses seeing a fast ascent in the locale, the medical care industry, including clinics, clinical associations, and different assortments of medical care communities are setting an extraordinary significance on therapy and advancement systems. This incorporates the utilization of technetium-99m in imaging innovations, consequently driving the development of the MEA technetium-99m market.

The expanding number of individuals experiencing ongoing ailments and coronary illness is projected to observe a slanted bend over the course of the following not many years, accordingly driving the general interest for technetium-99m. The market is additionally liable to profit by the quick pace of progressions in innovation that are being brought into the district. This applies exceptionally to imaging innovations, where there is a high utilization of technetium-99m.

Egypt is likewise a vital market for technetium-99m in the Middle East and Africa. The development of the market in the nation can be ascribed to the presence of top notch medical care offices, research associations, and government foundations zeroed in on making quality finding accessible for each individual experiencing malignant growth and tumors. Egypt likewise has an enormous populace base, which fills in as a key factor driving the technetium-99m market.

The quickly rising pool of patients experiencing various ongoing and non-transferable infections in the Middle East and Africa area and the situation is pushing government and private medical services associations to fortify its ability of satisfying this developing need for therapies. With conditions like diabetes, malignant growth, and heart illnesses seeing a quick ascent in the area, the medical services industry, including clinics, clinical associations, and different assortments of medical services habitats are putting an uncommon significance on therapy and improvement techniques. This incorporates the utilization of technetium-99m in imaging advances, consequently driving the development of the MEA technetium-99m market.

Technetium-99m is a medical radioisotope and used in gamma camera and SPECT for body imaging. SPECT is a highly sensitive technique to detect the parathyroid adenomas in the human body. It uses gamma camera for imaging purposes. Gamma camera is available separately for bone marrow and cardiac imaging, and is known as planar camera. Technetium-99m is widely used in hospitals and diagnostic centers and in some research institutes for diagnostic purposes. Rising number of cancer patients and cardiovascular ailments are expected to underpin the technetium-99m market. Technetium-99m is the preferred radioisotope for medical imaging due to its short half-life and appropriate energy emission for perfect image. It is generated by source named molybdenum, which is an abundantly present on earth. However, the process of producing its daughter isotope is a rigorous task it represents a high value in terms of availability. Technetium-99m can be produced by molybdenum-99 and molybdenum-100 but the both sources are utilized by two different manufacturing process i.e. from nuclear reactor on a large scale and from cyclotron & accelerator on a small scale governed by any hospital facility. An injection of technetium-99m is combined with albumin and administered to the patient for scanning lungs, for brain scanning it is aggregated with hexamethylpropyleneamine oxime and for detecting the cancerous breast masses it is combined with methoxyisonitrile (MIBI). Technetium-99m market in MEA region is expected to expand at a significant CAGR over the forecast period representing high incremental opportunity.

The report is a combination of primary and secondary research. Primary research formed the bulk of our research efforts, with information collected from telephonic interviews and interactions via e-mail. Secondary research involved study of company websites, annual reports, press releases, stock analysis presentations, and various national and international databases. The report provides market size in terms of US$ Mn for each segment for the period from 2016 to 2026, considering the macro and micro-environmental factors. Growth rates for each segment within the MEA technetium-99m market have been determined after a thorough analysis of past trends, demographics, future trends, technological developments, vaccination expenditure, and regulatory requirements.

The market overview section of the report includes qualitative analysis of the overall technetium-99m market including the determining factors and market dynamics such as drivers, restraints, market trends and opportunities, along with white space analysis. In addition, market attractiveness analysis by country, isotopic application and end-user along with competitive landscape by key players have been provided which explain the intensity of competition in the market considering different geographical locations. The competitive scenario between market players has been evaluated through market share analysis. These factors would help the market players take strategic decisions in order to strengthen their positions and increase their shares in the MEA market. Pricing and cost teardown analysis holds a crucial part of the report, which further describes the cost to end-user and cost to patient.

The market is driven by changing prevalence of diseases and rising affluence. The market is projected to grow due to increasing investment in healthcare sector. Technetium-99m being produced on large scale by the nuclear reactors are expected to be limited in future due to ageing of the major technetium-99m producing reactors around the world. In terms of end-user hospital segment projected to expand at a high CAGR on the backdrop of growing investment and funding from U.A.E. The diagnostic center and cardiac care center are expected to expand at a high CAGR over the forecast period. The isotopic application segment forms the base of the market estimation as it is purely based on the installed base of the machines and number of procedures performed per year for medical imaging in the region.

Geographically, the MEA technetium-99m market has been segmented into 21 countries with Turkey leading the market in 2015 followed by Egypt and Saudi Arabia. The applications of technetium-99m are rapidly growing in Turkey due to increasing direct and indirect investments by the U.A.E Government and other private companies. Increasing investments and penetration by key market players in MEA are likely to drive the technetium-99m market during the forecast period.

The technetium-99m market has been segmented as follows: