The systemic inflammatory response syndrome treatment market is anticipated to grow from ~US$ 9.8 Bn in 2019 to ~US$ 17.8 Bn by 2027, and this healthy growth is attributable to government initiatives taken towards reducing the mortality rate of patients diagnosed with sepsis. Advancements in SIRS therapeutics are further brought in due to investment firms established in developed countries, who fund numerous clinical development programs that possess the capability of formulating effective drugs.

According to the World Health Organization, 7/100 hospitalized patients are highly susceptible to infections, which can cause sepsis. The patient-susceptibility rate in developing countries exceeds even this seven-one-hundred ratio, which signifies profitable opportunities for the systemic inflammatory response syndrome treatment market, as consumers tend to gain financial lucidity along with health consciousness. 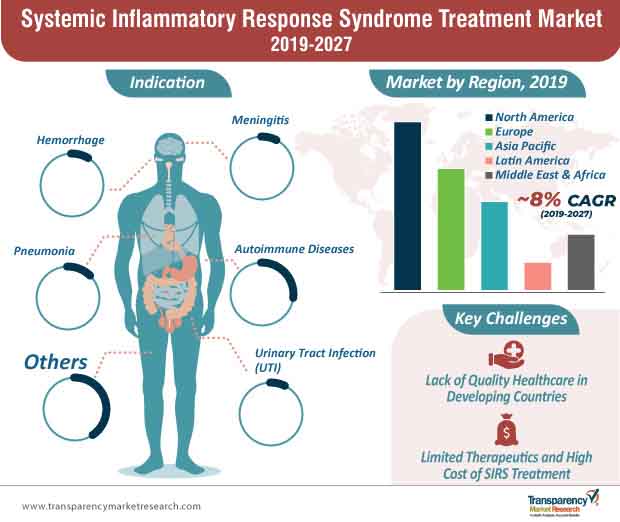 The TMR study finds that, revenue from the treatment of urinary tract infection will increase at a CAGR of ~8%, as dehydration, menopause, high consumption of birth control pills, and frequent involvement in sexual activities are leading causes of UTI. According to medical studies, a female’s body has a shorter urethra than a male’s body, which shortens the distance for bacteria to reach the bladder. This makes women more prone to UTI infections as compared to men, and the participation of women in availing SIRS treatment is also high. However, infections caused by unhygienic conditions that lead to the prevalence of autoimmune diseases are likely to hold significant value in the systemic inflammatory response syndrome treatment market during the forecast period.

Introduction of Effective Therapies and Drugs to Catalyze Market Growth

As concerns regarding the gravity of sepsis increase, market players operate within the range of innovation to develop effective drugs and therapeutics. Among other therapies, CytoSorb®, a specific extracorporeal cytokine adsorber, is emerging as an effective therapy to reduce inflammation and control the failure of vital organs, such as the lungs, kidneys, heart, and brain. Also, as demand for the initial-stage diagnosis of sepsis becomes more prominent, biomarkers were introduced for early detection, treatment, and disposition of the condition.

Besides therapies, ample efforts backed by central and private funding are leading to the development of numerous pipeline drugs. For instance,

Since developed countries remain at the forefront for the development of advanced therapies and drugs, given their sound technical knowledge, partnerships with players in developing countries are seen as a strategic move to gain a reciprocal advantage in the SIRS market. For instance, CytoSorbents Corporation collaborated with Biocon Ltd. to create a huge market for the sales of CytoSorb in overseas territories. 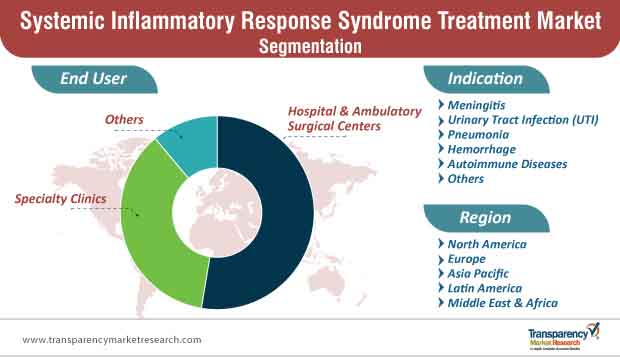 Stuck in a neck-to-neck competition with other brands? Request a custom report on “Systemic Inflammatory Response Syndrome Treatment Market”

Authors of the report infer that, the growth of the systemic inflammatory response syndrome treatment market will be upheld by the technology-intensive approach taken by manufacturers toward the development of sepsis treatment. Extracorporeal blood purification techniques for immunomodulation are gaining momentum in the SIRS treatment market as a potential therapy, while biomarkers and antibody-modified conduits are growing in importance as effective therapeutics.

Leading on the technological scale, North America is anticipated to remain a key investor in the systemic inflammatory response syndrome treatment market. Also, well-established infrastructure, coupled with magnified focus on the sterility of operation units in the healthcare sector of the region, further complements market growth. However, increasing medical tourism and substantial improvements in the healthcare quality of developing countries in Asia Pacific will bring profitable deals for players in the SIRS market.

Rise in Prevalence of SIRS: A Key Driver

Key players in the global systemic inflammatory response syndrome treatment market are engaged in the development of new products, mergers & acquisitions, collaborations, and integration. These strategies by industry players are likely to fuel the growth of the systemic inflammatory response syndrome treatment market. Some of the growth strategies adopted by the players are:

A unique research methodology has been utilized by TMR to conduct comprehensive research on the global systemic inflammatory response syndrome treatment market, and arrive at conclusions on the prospects of the market. This research methodology is a combination of primary and secondary researches, which helps analysts warrant the accuracy and reliability of the drawn conclusions.