The significant rise in the industrial application of surface acoustic wave (SAW) devices has been boosting the global market for SAW devices substantially. The increasing usage of these devices in communication technology and safety monitoring and defense application is also adding remarkably to the growth of this market.

Driven by the upswing in the application of these devices in electronic components and televisions and radios, the worldwide SAW devices market, which stood at US$1.9 bn in 2015, is likely to expand at a CAGR of 6.90% between 2016 and 2024 and reach a value of US$3.4 bn by the end of 2024. 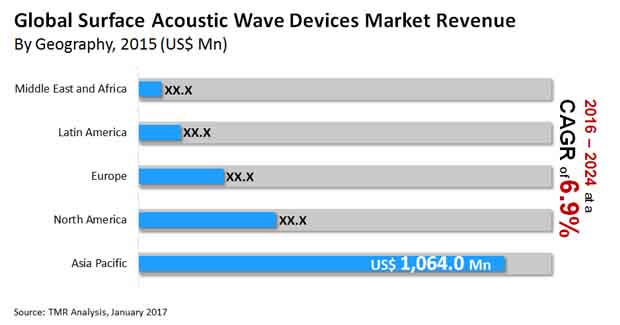 Filters, resonators, oscillators, and transducers are the key products available in the global market for SAW devices. The demand for filters is much higher than other products and is likely to continue like this over the forthcoming years, thanks to their extensive application in satellite broadcasting, wireless communication modules, keyless entry systems, and cellular phones.

The demand for SAW oscillators are also expected to rise at a healthy rate as their usage in television transmitters and radios to generate signals for broadcasting is likely to escalate substantially in the years to come. Furthermore, the augmenting demand for video games and electronic beeps, of which SAW devices are important components, is also projected to reflect positively on their demand in the near future.

Geographically, the global market for SAW devices is categorized into Asia Pacific, North America, South America, Europe, and the Middle East and Africa. Among these, Asia Pacific has emerged as the leading regional market for SAW devices and is projected to retain its position over the next few years. The high concentration of semiconductor companies in emerging economies, such as China, Taiwan, Japan, South Korea, and India, is the main factor behind the growth of this regional market.

Apart from this, a large number of telecommunication and consumer electronics enterprises have their production units in this region. The availability of cheap labor and raw materials have encouraged these manufacturers to set up their manufacturing facilities in this region, which subsequently, has increased the demand for SAW devices in Asia Pacific and is expected to remain doing so over the years to come. Hitherto, China, Taiwan, and Japan have been dominating the Asia Pacific market for SAW devices. However, India is likely to witness the growth at a rather faster rate in the near future due to the increasing adoption of technology.

North America stood second in the global market for SAW devices in 2015 and is anticipated to continue at the same position in the years to come, thanks to the widespread application of these devices across a number of industries in this region.

Surface acoustic waves are the type of sound waves that are able to travel along the surface of any material which has a displacement amplitude decaying exponentially. The procedure confirms that the sound waves are restricted to inside a single wavelength on the surface. These devices are able to encamp into several different applications including micro fluidics, geophysics, and flow measurement. Because of the early development stage of the SAW devices, the global market witnessed superior technological advancements. Such developments were mainly concentrated defense as well as aerospace applications. However, in recent years, with the up and coming emergence of telecommunication, surface acoustic wave devices market has undergone considerable transformation leading to overall market growth.

These devices have filter through which an electric signal is converted into an acoustic or mechanical wave with the help of piezoelectric substrate like quartz or inter-digital transducer. The SAW devices are primarily used in 2G receiver front ends and in collecting duplexer signals.

The competitive landscape of the global surface acoustic wave (SAW) devices market is a fragmented one. This fragmentation of the competitive landscape is a result of presence of several notable companies operating in the global market space. The companies in the global surface acoustic wave (SAW) devices market are expected to witness fierce competition in the coming years of the forecast period. Launch of new products and devices are expected to be the key driving factor that will fuel the competition in the market.

The surface acoustic wave devices market on the basis of devices has been segmented into filters, oscillators, resonators, transducers and others. The surface acoustic wave device on the basis of end use industry has been segmented into aerospace and defense, telecommunication, environmental and industrial, automotive, consumer electronics, healthcare & medical and others.

The global surface acoustic wave devices market by geography has been broadly segmented into North America, Europe, Asia Pacific, Middle East and Africa and South America. The market report deals in the forecast of the surface acoustic wave devices market in terms of revenue (USD million) in terms of revenue as well as the CAGR for the forecast period of 2016 to 2024.

The competitive profiling of the key players in the global surface acoustic wave devices market has been comprehensively covered under the scope of the report. The key players in the SAW devices market have been competitively profiled across the five broad geographic regions. This competitive landscape is inclusive of the various business strategies adopted by these major players and their recent developments in the field of SAW devices.

In order to provide a detailed insight into the market dynamics of global surface acoustic devices market, the drivers and restraints affecting the industry are included in the study. Market dynamics include market opportunity, drivers and restraints and an extensive analysis of these factors are included in the report. Furthermore, market attractiveness breakdown has also been provided in the report. Therefore, the report provides a comprehensive study of the global surface acoustic wave devices market and also offers the forecast of the market for the period from 2016-2024.

Skyworks Solutions has acquired PMC-Sierra to strengthen its business of data storage. This acquisition has also improved research and development facilities for the company. The company has strong stock of patents across different verticals and also maintains strong product portfolio to customer requirements.