Sulfur, being one of the main raw materials in fertilizers, is anticipated to face uncertainties due to the ongoing COVID-19 pandemic. As such, prices have dropped for sulfur, which is an opportunity for stakeholders in the sulfur fertilizer market to strategize on financial allocations and production activities. Agriculture, an essential industry during the coronavirus, has seen less uncertainty in business activities.

The tight availability for sour crude oil is influencing the growth of the global sulfur fertilizer market. This has led to the curtailment of oil-based sulfur supply. Depressed oil-based sulfur supply and new ship emission regulations in North America and Europe are affecting production processes. Hence, most industries are adopting the plug & play approach to achieve cost and time efficiency.

Immediate availability and water solubility of sulfur are beneficial in fertilizer production. However, sulfur is associated with leaching and loss of sulfur after one rainfall. Hence, companies in the sulfur fertilizer market, such as Shell Thiogro, are adopting technologies that incorporate micronized elemental S into fertilizers to overcome its drawbacks.

Achieving food security has become important for manufacturers in the sulfur fertilizer market. Companies need to comply with the guidelines issued by the International Fertilizer Association (IFA) and the Food and Agricultural Organization of the United Nations (FAO) in order to adopt the best agricultural practices. As such, sulfur is linked with healthy crop growth, which leads to increased yield and productivity of farmers.

Sulfur is being extensively used for plant protection in agriculture. Companies in the sulfur fertilizer market, such as Repsol, is boosting its marketing capabilities for PRILL SULFUR, which is being used as a raw material for manufacturing fertilizers. Manufacturers are increasing their production capabilities, since sulfur fertilizers are being used in alkaline soils to correct pH levels and improve the absorption of nutrients.

Sulfur deficiency has become a widespread problem, compounded by fewer sulfur oxide emissions in the soil. Hence, stakeholders in the sulfur fertilizer market are educating farmers and cultivators to use this manure during fall or spring to boost yield of corn, canola, wheat, and alfalfa. This flexibility is being preferred by farmers, when weather extremes create costly delays during spring fieldwork and planting.

Apart from corn and wheat, strong sulfur responses are being encountered in soybean. New agriculture findings are bolstering the growth of the sulfur fertilizer market, which is predicted to cross US$ 5.6 Bn by the end of 2030. Manufacturers are setting their collaboration wheels in motion with researchers from universities such as Shaun Casteel, a Purdue University Extension soybean agronomist, which credits increased soybean yield due to sulfur fertilizers.

Different forms and applications of sulfur fertilizers such as mixing of liquid S formulations with other compounds is catching the attention of farmers and manufacturers alike. The spring topdress is emerging as an ideal time for use in sulfur application. Significant decrease in atmospheric sulfur from rains has fueled the demand for sulfur fertilizers, as after nitrogen, phosphorous, and potassium, sulfur is important for crop growth of wheat. S-containing fertilizer materials, such as ammonium sulfate and gypsum are great for top dressing and pre-plant applications. New N-P-S products such as micro-essentials and others are helping to correct sulfur deficiency. 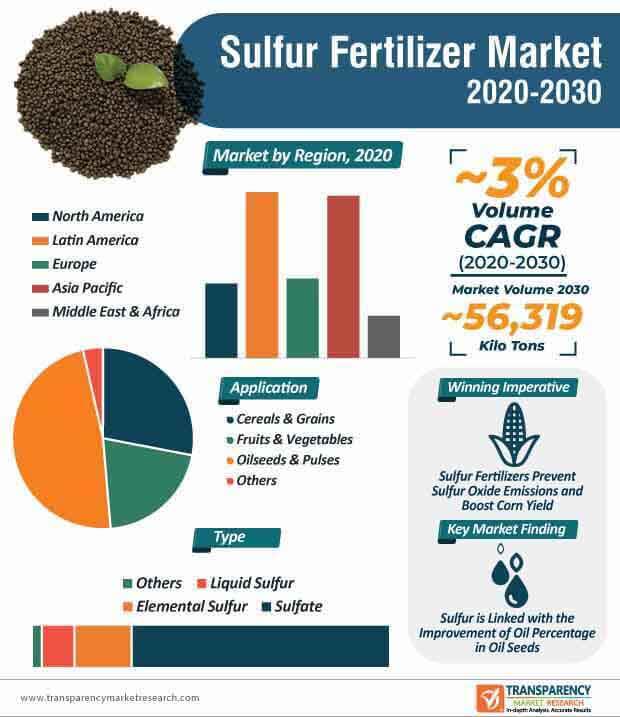 Looking for Regional Analysis or Competitive Landscape in Sulfur Fertilizer Market for Performance OEM , ask for a customized report

The increasing international attention toward new farm laws in India is estimated to boost investments in fertilizer production and crop management in the upcoming months post the coronavirus pandemic. Reduced organic matter in soil and S-deficient hilltops are creating cultivation hurdles for farmers, thus affecting the growth of the sulfur fertilizer market. Hence, manufacturers should educate farmers about strategic use of sulfur in wheat, soybean, and corn in various forms and applications to spike yield. As such, sulfur is linked with the improvement in oil percentage in oil seeds, protein content in seeds, and milling quality of cereals. Increase in nutritive value of forages and plant resistance to cold and disease are boosting the demand for sulfur fertilizer.

Rise in Demand for Sulfur Fertilizer in Oilseed and Pulses: Major Driver

Increase in Applications of Sulfate

This study covers a detailed segmentation of the global sulfur fertilizer market, along with key information and a competition outlook. The report mentions company profiles of players that are currently dominating the global sulfur fertilizer market, wherein various developments, expansions, and winning strategies practiced and implemented by leading players have been presented in detail.

The report provides detailed information about the global sulfur fertilizer market on the basis of comprehensive research on various factors that are playing a key role in accelerating the growth potential of the global market. Information mentioned in the report answers path-breaking questions for companies that are currently operating in the market and are looking for innovative methods to create a unique benchmark in the global sulfur fertilizer market, so as to help them design successful strategies and make target-driven decisions.

The research methodology adopted by analysts for compiling the global sulfur fertilizer market report is based on detailed primary as well as secondary research. With the help of in-depth insights of the market-affiliated information that is obtained and legitimated by market-admissible resources, analysts have offered riveting observations and authentic forecasts for the global sulfur fertilizer market.

During the primary research phase, analysts interviewed market stakeholders, investors, brand managers, vice presidents, and sales and marketing managers. Based on data obtained through interviews of genuine resources, analysts have emphasized the changing scenario of the global sulfur fertilizer market.