Technology, design, and compatibility remain the key competing parameters for manufacturers, meaning, only innovation is constant in this evolving landscape. Extended frontiers of applications for strain gauge load cells will draw new revenue tangents, given the zoomed-in focus of manufacturers towards the convergence of engineering and manufacturing capabilities. This will aid them in catering to the complex design and performance requests of numerous end-use industries. 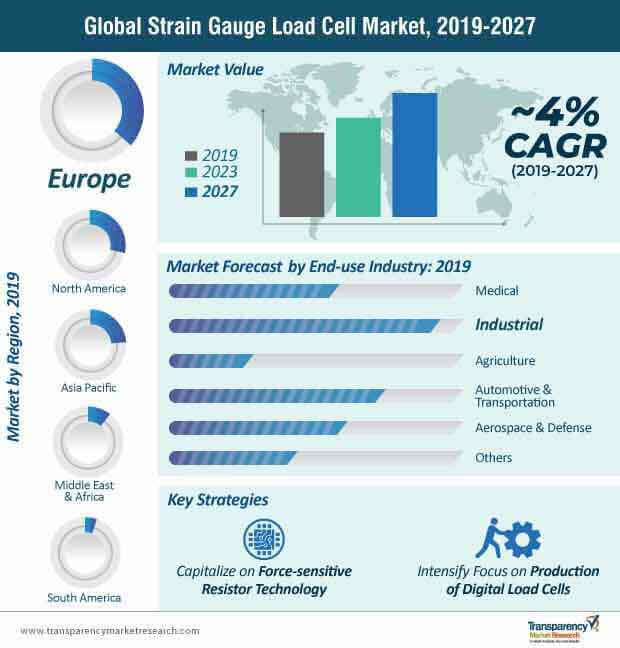 Drumbeat of Digitalization Harbingering a Shift in the Landscape

Analog strain gauge load cells continue to dominate the market, given their cost-effectiveness. Beside the battle of pricing being fought between digital and analog cells, the robust design of analog cells further bolds the line separating them from digital cells. Given the high proclivity of end-use industries for affordability and better designs, analog strain load cells account for a market share of ~ 85 percent. However, accuracy being the key feature of contemporary manufacturing processes, a shift towards digital technology will remain a key highlight of the strain gauge load cell landscape to accentuate automation.

Real-time processing of information is better achieved with digital strain gauge load cells, given their high data sample rates as compared to analog load cells. The use of binary data further ensures the security of digital cells from interference from electromagnetism, radio signals, and temperature. Less susceptibility to signal corruption and faster transmission of data encourages manufacturers to favor the adoption of digital load cells over analog load cells. Currently, digital strain gauge load cells are estimated to record volume sales of ~ 730 thousand units, with a compound annual growth rate of ~ 6 percent during the forecast period.

The contemporary electronics industry has arrived at a juncture, wherein, grain-sized innovation, in the form of sensors, capacitors, and resistors, adds massive value to conventional devices. Similarly, force-sensing resistor (FRS) technology is the innovation in strain gauge load cells that offers excellent property to alter the resistance based on the force applied to the surface.

Strain gauge load cells developed using FRS technology are gaining traction, as the thin size of electronic components that is less than 0.5 mm remains desirable for the development of testing devices and equipment for the aerospace, defense, and automobile sectors. Besides being compact in nature, these cells come at an affordable price and offer good shock resistance, which have been popularizing the integration of FRS technology for the development of strain gauge load cells.

With connected things and devices, already being the envisioned future of healthcare and defense industries, strain gauge load cells embedded with FSR technology unlock new avenues to wirelessly communicate with other devices and facilitate various functionalities with minimal human intervention.

The performance of the automobile industry in Europe has reflected on its strong hold on the global strain gauge load cell market. With electric vehicles making high inroads in the region, and autonomous vehicles being the very future of automobile and transportation industries, the concentration of leading automakers and their zest to leap quality norms are leading to the high adoption of strain gauge load cells for testing and qualifying vehicles. Since the automotive industry harnesses the prowess of numerous force transducers and torque meters to ensure the smooth functioning of vehicles, strain gauge load cells are heavily employed for varied applications, including, but not confined to, fatigue tests, crash tests, and shock absorber tests.

Existing players in the strain gauge load cell market have strong exposure in oversea territories, i.e. high reliance of consumers on their products. This has significantly impacted the width of the entry passage for new entrants. In addition, winning teams have already embraced digital technologies in order to stay ahead of the competition curve.

With the evolution of contemporary end-use businesses, these players resort to research and development activities for the development of customized strain gauge load cells, with prime focus on the technology, features, designs, and compatibility of these cells. Anyload Weigh & Measure Inc., a key market player, focuses on customer-centric products, and in February 2019, announced the launch of the ANYLOAD TMA-108B Compression Test Mount Device for testing and ensuring the working of devices as per requirements. Another significant player - Hottinger Baldwin Messtechnik GmbH, introduced a compact-sized SP8 single-point load cell for dynamic weighing applications.

Besides the enhancement of product portfolio, merger and acquisition activities have also been a regular feature in the strain gauge load cell market. However, these strategies are mostly followed by leading and prominent players. Though the highly competitive landscape leaves very little room for emerging market players, they can focus more toward improving the performance of strain gauge load cells to score big over leading players in the market. Staying abreast with technological reforms can further pave the way towards a higher market share, given the evolutionary nature of the landscape.

The global strain gauge load cell market has been segmented based on technology, type, end-use industry, and region.

The research undertaken by Transparency Market Research analysts involves a systematic approach to cull crucial insights and strategies by using both, primary as well as secondary research methodologies. Discussions with key opinion leaders, market heads, industry experts, vendors, and distributors were carried out to conduct primary research. This helps in analyzing the demand-supply gap available in the strain gauge load cell market during the forecast period.

Marketing collaterals, company websites, industry associations, and government statistics were referred to for conducting secondary research. Information culled through primary and secondary research is then validated with the help of the data triangulation method to eliminate any redundancy.