The global sterile injectable drugs market is prophesied to achieve growth on the back of short timelines for approval of new drugs to be used in the treatment of chronic diseases such as cancer. The Food and Drug Administration (FDA) in the U.S. is observed to approve sterile injectable drugs at a faster rate. While this could provide a good boost to the market, other factors such as snowballing focus on the research and development of anti-cancer drugs and increasing number of chronic and cardiovascular diseases are anticipated to set the tone for a valuable growth in the near future. 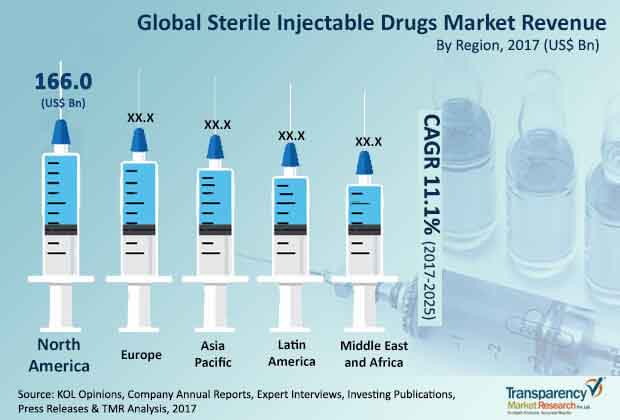 The world sterile injectable drugs market could be segmented as per geography, distribution channel, indication, drug class, and type. In terms of type, the market could see a classification into large molecule and small molecule. Amongst these, large molecule is projected to achieve a higher growth in the coming years.

On the basis of class of drug, there could be segments such as peptide antibiotics, blood factors, immunoglobulins, vaccine, peptide hormones, insulin, cytokines, and monoclonal antibodies (mAbs) offering growth in the world sterile injectable drugs market. Out of these, mAbs are predicted to exhibit a stronger growth in the foreseeable future. Forecast to be followed by the segments of insulin and vaccines, mAbs accounted for an over 26.0% share in 2016. The ability to bind to the same epitope with the help of monovalent affinity could be an exclusive feature of mAbs supporting the segment to secure a larger share in the market. Furthermore, mAbs could carry drugs and help to trigger the immune system.

With respect to indication, the world sterile injectable drugs market could be segmented into infectious diseases, pain, hematology, gastroenterology, autoimmune, oncology, neurology, and cardiology and metabolic disorders. By distribution channel, the market is envisaged to be cataloged into ecommerce, retail pharmacy, and hospital pharmacy.

Regionally, it could be said that North America and Europe dominated the international sterile injectable drugs market in 2016 with a sizable aggregate share. However, North America took the lead in the market during the year, and is prognosticated to continue to gain traction in the coming years. With an 89.1% share bagged in 2016, the U.S. outplayed other countries in the region while riding on comprehensive research and development, technological advancements, and the rising need to manage and treat chronic diseases.

Treading on the heels of North America and Europe, Asia Pacific (APAC) is envisioned to showcase a faster growth in the international sterile injectable drugs market, mainly on the back of countries such as China, Japan, and India. Some of the factors that could augment market growth in APAC are rising awareness, high count of patients, promising policies, and new product launches. In Latin America, Brazil could secure a good share of the international market while riding on continuous investments in healthcare infrastructure and recent economic development.

This report on sterile injectable drugs market studies the current as well as future prospects of the market globally. The stakeholders of this report include companies and intermediaries engaged in the manufacture, commercialization, providing sterile injectable drugs products as well as new entrants planning to enter this market. This report comprises an elaborate executive summary along with a market snapshot providing overall information of various segments and sub-segments considered in the scope of the study. This section also provides the overall information and data analysis of the global sterile injectable drugs market with respect to the leading market segments based on major types, applications, usage, end users, and geographies.

Based on the product type, the sterile injectable drugs market has been segmented into: small and large molecules. In term of indication, it can be segmented into cardiology & metabolic disorders, neurology, oncology, autoimmune, gastroenterology, hematology, pain, infectious diseases and others. On the basis of drug class it can be segmented into monoclonal antibodies, cytokines, peptide hormones, vaccines, peptide antibiotics, insulin, blood factors, immunoglobulin and others,. Each of the market segments have been extensively analyzed based on the market related factors such as increasing adoption rate worldwide, technological advancement, and growing number of use of disposable products in various geographies. Moreover, historical year-on-year growth have been taken into consideration while estimating the market size. The market size and forecast in terms of US$ million for each segment has been provided for the period from 2015 to 2025. The report also provides the compound annual growth rate (CAGR %) for each market segment for the forecast period from 2017 to 2025, considering 2016 as the base year.

The market overview section of the report explores the market dynamics such as drivers, restraints, and opportunities that currently have a strong impact on the sterile injectable drugs market and could influence the market in the near future. Market attractiveness analysis has been provided in the market overview section in order to explain the intensity of competition in the market across different geographies. The competitive scenario among different market players is evaluated through market share analysis in the competitive landscape section of the report. All these factors would help market players to take strategic decisions in order to strengthen their positions and expand their shares in the global sterile injectable drugs market.

Geographically, sterile injectable drugs market has been segmented into five major regions: North America, Europe, Asia Pacific, Latin America, and Middle East & Africa. The market size and forecast for each of these regions has been provided for the period from 2015 to 2025, along with their respective CAGRs for the forecast period from 2017 to 2025, considering 2016 as the base year. The report also provides with market size and forecast for major countries in the respective regions. A detailed qualitative analysis of factors responsible for driving and restraining the market growth and future opportunities has been provided in the market overview section. This section of the report also provides with market attractiveness analysis, Porter’s five forces analysis, market strategy overview, and market share analysis by key players, thus presenting a thorough analysis of the overall competitive scenario in the global sterile injectable drugs market.

The global sterile injectable drugs market is segmented as follows: