The entire gamut of sports relies on technology to evolve and stay relevant. This business fundamental is no different for those in the global market for sports protective equipment. This sector has gained impetus over the years, as fatal injuries prompt regulating bodies to find solutions to avert such situations in the future. And, in most cases, experts turn to technology for an answer.

A classic example to this was when Cricket Australia, in 2016, recommended neck guards for players, after thoroughly investigating the Phil Hughes incident. In November 2014, Hughes, a middle-order Australian Test cricket batsman, collapsed after a racing ball from Sean Abott struck his neck. Hughes suffered a hemorrhage, was induced into a coma, but succumbed to his injuries two days after the episode. Since then, not only Australian cricketers, but players across the world have fixed neck guard in their helmets.

As safety becomes imperative across all forms of sports, the demand for protective gear gains heat. With the growth rate bestowing promise within manufacturers, the need for a guiding resource to lay down a result-oriented strategic layout for the future becomes imminent. This unanswered need from companies prompts Transparency Market Research (TMR) to bring out a report that attempts to capture every relevant aspect of the budding sports protective equipment market, where succinct information is scarce. 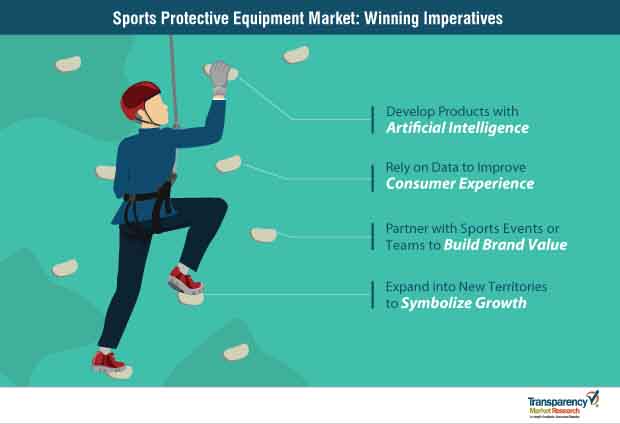 Across sporting arenas, it is head injury that the sports fraternity considers the most fatal. While Phil Hughes died to an unprecedented accident where the proven British style helmet exposed his neck, seven-time Formula-1 champion Michael Schumacher was induced into a coma after he injured himself while skiing in the French Alps in December 2013.

While these two instances are proof to the importance head gear holds in sports protective equipment, statistics cement the belief. A study published in March 2019 showed that, 21% of all traumatic brain injuries in American children were attributed to sports. Further, half of these head injuries are among children who indulge in bicycling, skate-boarding, and skiing.

The importance of head protection equipment resonates in the market revenues too. In 2018, 34.6% of the total revenue came from head gear sales. It is, however, important to read between the lines, for the players in the sports protective equipment market to find an opportunity. When it comes to share in terms of unit sales, protective gear for upper body stands a good 9% ahead of head gear sales. This implies that, head gear is more expensive than other protective gear. The price gap is moderately narrow (US$ 3-5) in North America and Europe, but is wider (US$ 7-10) in Asia Pacific. TMR’s report shows that, the head gear segment reaped US$ 2,968.7 Mn from the sales of 60.4 Mn units in 2018. On the other hand, 84.2 Mn units of upper body gear yielded US$ 2,754.7 Mn in the same year. Complexities in specifications for head gear invariably make them expensive. But, the key to sustenance in the coming years lies in working out models that cut down on the cost of head gear.

Sports Protective Equipment Market: Trends that Players can Cash-in On

Technology is the Biggest Boon

As we speak, companies across the globe are developing products that will redefine the space of sports protective equipment in the future. Famous NFL player Shawn Springs is developing a next-generation helmet based on the cloud crash technology. This claims to save players from the impact of a fall or crash in football. What’s important is that, the product has been tested for different angles and speed.

Another product under R&D is a shock-absorbing gear, which will prevent players from suffering serious injuries in rugby. Then, there is a sensor that will monitor the health of race horses. This will help authorities understand if the horse is being overworked, and thus, warn the rider, asking him/her to slow down. This will prevent falls and collisions.

While we speak of sensors to monitor equine health, smart wearables have already their made way into the sports protective equipment market. Physiotherapists and coaches have started recognizing the importance of data that reflects players’ health on the field. Thus, they are able to custom-design training programs for each players working on specific areas of fitness.

E-Commerce is the Better Digital Channel

There is no doubt that digital is the new normal for both, marketing and sales. However, companies might feel that a self-created web portal might meet the needs, but consumer behavior reflects a different picture. With information conveniently at their disposal, consumers prefer shopping from unbiased third-party platforms. This gives e-Commerce platforms an upper hand, as they provide products from most of the players in the market. The advantage of comparing products coupled with customer reviews helps buyers refine their judgment based on facts. The TMR study shows that, out of the US$ 3,232.3 Mn sales through the online channel in 2018, US$ 2,211.6 Mn was accounted through e-Commerce platforms, which is roughly 70%. It is also important to note that, e-Commerce also carved 25% sales revenues in the global sports protective equipment market. 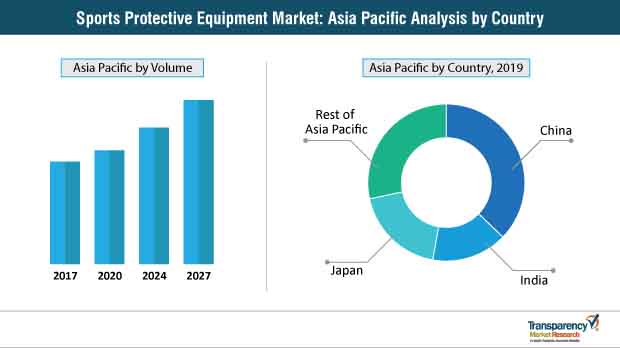 Upgrading Digital Technology to Stay Ahead

In April 2018, Nike Inc. acquired Israel-based Invertex Ltd. to upgrade its digital technology interface. This will allow Nike to provide its consumers with something that helps choose the best shoes. With Invertex’s upcoming 3D technology that works on artificial intelligence, consumers will be able to scan their feet through an app and choose shoes that fit them well. Fitting has been a critical problem for safety gear, and in the coming years AI will play a crucial role in designing custom-fit gear. Having said that, Nike seems to have made the first leap in introducing AI.

Innovation to Make the Difference

ASICS launched energy-saving shoes METARIDE. This, though not directly, aims to save energy for marathon runners with a technology that provides better sole comfort. Designed based on a study and a two-year-long research effort in Kobe, Japan, these shoes reduce the strain applied by a runner, thus lowering expend of energy. As a result, runners accumulate energy with time, providing them an advantage to sprint faster towards the end. On the other hand, it also prevents athletes from collapsing due to a sun stroke or energy loss.

Partnering with Sporting Events or Teams to Test Products

While conducting in-house tests using employees or a small set of players has been the norm, it could not be better than witnessing players use your product in the game, real-time. This idea prompted Xenith, LLC to partner with National Football League to study which product is more suitable in reducing the sternness of helmets. This initiative, according to the TMR study, has doubled the sales volume of Xenith’s helmets after Virgina Tech STAR testing system rated it at the top. While third-party ratings can impart value to your product, testimonials from players could just be the icing on the cake.

Companies are investing in R&D to ensure that they launch products ahead of time, to make the most of the demand. Riding on the back of new technology, big brands are already sensing opportunities in the future. This prompts them to either launch a self-sustained research initiative, or if they prefer to play safe, then they procure a company with a proven technology. While the risk level is low in acquisitions and mergers, it still bears the doubt of failing while scaling up.

On the other hand, a common norm followed by all players, small or big, is to expand into new territories. While for big brands, it is a default effort to improve sales figures, for smaller companies, it is more about garnering global business reputation. This, eventually, will help build brand value for smaller and regional players.

While healthy competition stems from companies adopting ethical strategies, counterfeit products seem to worry manufacturers with every passing incident. Smaller and regional players use technology to produce the first copy of branded products, and lure consumers from rural and semi-urban areas with low cost. Companies will have to make attempts to weed out counterfeit products if their expansion strategies need to yield results.

With a moderate CAGR taking the global sports protective equipment market to a substantial value by the end of 2027, analysts hold a positive outlook of this market. As participation in sports swells, the demand will soar in the coming years. This is understandable from the expected positive impact on the entire sports industry. Another positive impact of the growing participation in sports is regulatory intervention to impart safety into every sport. As rules mandate the use of safety gear, players in the global sports protective equipment market will witness a surge in demand.

At the same time, analyst also indicates that technology will be the backbone of the future product line. Every development will be backed by a technological innovation, feel the authors of the report. Having said that, players will have to be cautious about consumer behavior and change. A miss on this front can be dear for a company, especially the bigger brands.

The intuitive predictions from experienced analysts that are backed by prolific research may be the game-changer for your winning strategy in the sports protective equipment market in the coming years. The gaps between the primary and secondary research findings are prudently bridged by expert viewpoints. Based on value judgment, TMR analysts have rendered the sports protective equipment market report into multiple sections, and have provided a detailed analysis.

In the next section, the TMR’s report on the sports protective equipment market provides details of the report assumptions and research methodology. This chapter helps readers acquaint with terminologies and critical parameters that have been taken into account for the analysis. It also informs the readers about the methodologies adopted to ensure that the analysis is precise and accurate to the last decimal. These details also allow readers to ascertain that the methods adopted are relevant and credible.

The next section in the TMR report on sports protective equipment is the executive summary. In an easy-to-understand graphic, analysts capture the revenue shares of each segment and region. This defines the importance of the business, thereby, laying the foundation for the value of the report.

Having provided readers with an extensive market overview, the report then moves on to another elaborate section, where analysts provide current and forecasted revenue figures for each segment and region in the sports protective equipment market. It then moves to the competitive landscape, where analysts have put together the strategies adopted by leading players and their market share, in a comprehensive table. The next set of slides are dedicated to profiling leading players in the sports protective equipment market, where details such as developments, product portfolio, revenue, etc., are provided. The report ends with a concise slide providing the key takeaways for the readers.

TMR’s analysts have relied on secondary research to lay down the foundation for the sports protective equipment market report. For secondary research, analysts have used internal and external databases to cull out information that is prudent and relevant. Once this is done, analysts identify key opinion leaders who are prominent names in the sports protective equipment market, to understand their viewpoints of the current trends, factors influencing growth, and the restraints. Further, analysts rely on multiple databases to understand the market scenario, competition, decide on market figures, and the market size. Then, using modern tools, analysts carry out technical analysis and derive forecast figures. These figures are checked and rec-checked to ensure credibility, and thus provides the historical and prevailing trends in the sports protective equipment market.