According to a new market research report published by Transparency Market Research titled ‘Sound  Sensor Market (Application: Ultrasonic Sensors [Liquid Level Measurement, Object Detection, Distance Measurement, Anti-collision Detection, Pallet Detection, and Others] and Acoustic Sensors (Sensing of Physical Parameters); Specification: Low Frequency Detection (<20,000 Hz) and High Frequency Detection (>20,000 Hz); and Industry Vertical: Health Care, Industrial, Automotive, Consumer Electronics, Security & Surveillance, and Others) – Global Industry Analysis, Size, Share, Growth, Trends, and Forecast, 2018–2026,’ the global sound sensor market is expected to reach 67,307.7 thousand units, in terms of volume, by 2026. The market is projected to expand at a CAGR of 6.28% from 2018 to 2026. According to the report, the global market is expected to continue to be influenced by a range of factors in the near future, such as growing use of industrial automation and vehicle automation systems worldwide, increasing demand for voice recognition systems across the globe, and rising use of sound sensors across smartphones and in applications such as fingerprint scanning and object detection. Asia Pacific is estimated to continue to lead the global market, with the market in the region expanding at a CAGR of above 7% during the forecast period. Prominent economies in Asia Pacific such as China, Japan, India, and South Korea are adopting sound sensors increasingly. 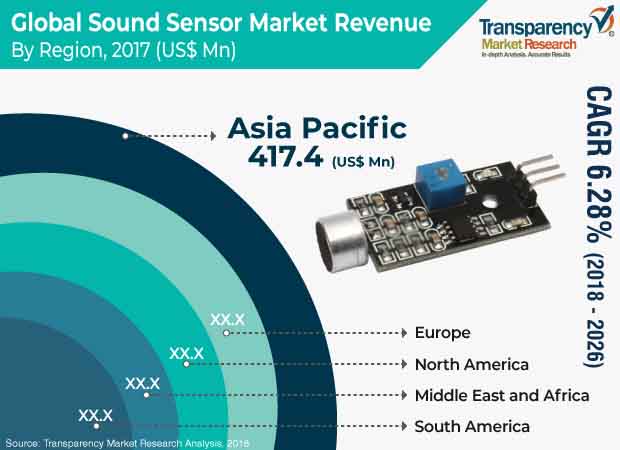 Based on specification, the global sound sensor market has been divided into low frequency detection (<20,000 Hz) and high frequency detection (>20,000 Hz). High frequency detection sound sensors are capable of detecting sound waves of more than 20 KHz of frequency. These are generally called ultrasound or ultrasonic sound sensors. These sensors are largely used across multiple sectors including automotive, health care, industrial, consumer electronics, and security & surveillance. These can be used in applications such as robotic sensing, tank level measurement, object detection, loop control, and parking assistance systems. Moreover, use of high frequency detection sensors is likely to increase significantly in the next few years, with the advent of innovative technologies such as ADAS systems, autonomous vehicle systems, industrial automation or industry 4.0, and next-generation smartphones with fingerprint scanning.

Automotive, industrial, and consumer electronics segments projected to expand at a rapid pace

In terms of industry vertical, the sound sensor market has been segmented into health care, industrial, automotive, consumer electronics, security & surveillance, and others. The others segment comprises aerospace and chemical. Sound sensors are highly useful in several industrial applications, as they can detect and measure the object. Moreover, they can sense distance for non-invasive measurement with a high level of accuracy. They can detect the target from a long distance. Ultrasonic sound sensors are helpful in several health care applications, as they are useful for the soft tissue scan across the body. Their use also reduces chances of contamination, as these sensors are non-contact in nature. Moreover, sound sensors are employed significantly in the automotive industry in several applications such as advanced driver assistance systems, autonomous vehicles, and automatic parking systems. With increasing investments in the technology related to automotive, industrial, and consumer electronics, the global sound sensor market is expected to witness prominent growth in the next few years.

Asia Pacific is expected to hold a major share of the global market for sound sensors during the forecast period. Leading share of the region is primarily attributable to strong presence of well-established players in the region, especially in prominent economies such as China, Japan, and South Korea. Governments of China and Japan are investing heavily in smartphone and semiconductor technologies. Furthermore, the automotive industry in Asia Pacific is expanding prominently, owing to the increasing demand from Japan and China. Asia Pacific is home to several well-established players that manufacture sound sensors including Badger Meter, Inc., OMRON Corporation, Murata Manufacturing Co., Ltd., Benthowave Instrument Inc., and numerous emerging and smaller players. Moreover, Asia Pacific is witnessing high adoption of sound sensors, due to continuously increasing industrial automation and growing automotive industry in the region, which employs sound sensors significantly. Several manufacturers in the region are focusing on enhancing the quality of their products, showcasing their products by participating in trade shows, and focusing on customer satisfaction. For instance, OMRON Corporation offers high-quality and technologically advanced industrial automation solutions including ultrasonic sensors. The company also provides customer support for its products. Additionally, the company conducts customer satisfaction surveys in various countries, on a regular basis, to identify and analyze customer requirements.

The report includes profiles of well-established players operating in the global sound sensor market. These include Siemens AG, MaxBotix Inc., STMicroelectronics N.V., Rockwell Automation, Inc., and Robert Bosch GmbH. These players are focusing on providing innovative sound sensors worldwide. For instance, in 2018, Robert Bosch GmbH collaborated with Daimler AG, an automotive company, for the development of autonomous vehicles in San Jose, California (the U.S.). The ECU network of the autonomous vehicle by Daimler AG gathers all information and transmits it to ultrasonic sensors provided by Robert Bosch GmbH so as to enable automatic parking.

The research study of the global sound sensor market provides detailed analysis of different segments of the market including application, specification, and industry vertical segments. Based on application, the market has been bifurcated into ultrasonic sensors and acoustic sensors. The ultrasonic sensors segment has been sub-classified into liquid level measurement, object detection, distance measurement, anti-collision detection, pallet detection, and others. The others segment comprises ranging measurement and loop control. Additionally, based on specification, the market has been segmented into low frequency detection (<20,000 Hz) and high frequency detection (>20,000 Hz). Moreover, in terms of industry vertical, the market has been divided into health care, industrial, automotive, consumer electronics, security & surveillance, and others. The others segment comprises aerospace and chemical.

Primary research involved e-mail interactions, telephonic interviews, and face-to-face interviews conducted for each segment and sub-segment of the sound sensor market across geographies. TMR conducts primary interviews on an ongoing basis with market participants and commentators in order to validate the data and analysis. Primary interviews provide firsthand information on market size, market trends, growth trends, competition landscape, and market outlook. These help in validation and strengthening of secondary research findings. They also help develop market expertise and understanding of the team of analysts.

The report includes profiles of well-established players operating in the global sound sensor market. These include Siemens AG, MaxBotix Inc., STMicroelectronics N.V., Rockwell Automation, Inc., and Robert Bosch GmbH. These players are focusing on providing innovative sound sensors worldwide. For instance, in 2018, Robert Bosch GmbH along with Daimler AG, an automotive company, collaborated for the development of autonomous vehicles in San Jose. The ECU network of the autonomous vehicle from Dailmer AG gathers all the information and transmitted to the ultrasonic sensors provided by Robert Bosch GmbH to enables the automatic parking.

The global sound sensor market has been segmented as follows: