Around two decades ago, a complicated procedure such as an open heart bypass surgery would involve a high level of risk. The patient would need a longer hospital stay and a month-long recovery period. Today, the risk level has been brought down to just 1-2%, and recovery takes just around a week. What’s changed? Open heart bypass, which requires a 6-7-inch incision, has been replaced by the key-hole procedure. The concept of painless treatment and speedy recovery has become the norm in healthcare today. And, all of this has happened on the back of technological advancements that have made sophisticated procedures simple for both, doctors and patients.

While 206 bones make up the human skeletal system, the rest of the body is inundated with soft tissues. Muscles, tendons, ligaments, nerves, and blood vessels - all are soft tissues. While they are termed as soft tissues, damage to them can leave an individual in severe pain. Treatment varies from physiotherapy to replacing soft tissue. In case of surgery, doctors recommend soft tissue allografts to patients. With accident victims and sportspersons account for a large share of the end users, early recovery with less damage to the body is critical. Physical fitness is paramount for a sportsperson. This establishes the inclination of both, sportspersons and doctors, towards soft tissue allografts. 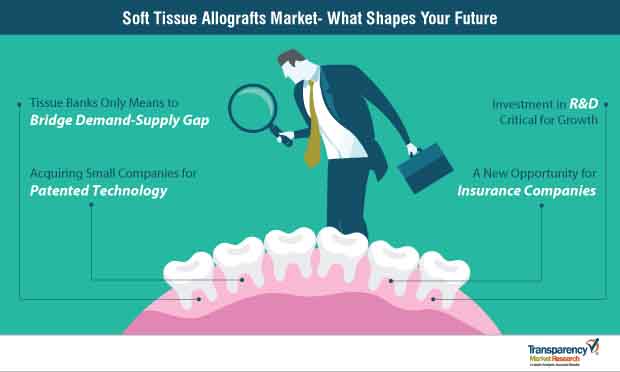 While private players in the soft tissue allografts market can bridge the demand supply gap, cashing-in as an opportunity, hospitals can also step forward to meet the demand. While setting up a tissue bank on their own might not be feasible, a group of hospitals can come together to meet this goal. This will divide the burden, both, in terms of manpower and capital.

On the other hand, current trends in the soft tissue allografts market also open new doors of opportunities for insurance companies. Our study points out that, the cost of an allograft procedure is high when compared to autografts or synthetic allografts, again attributed to the limited availability of allografts. While tissue banks can help bridge the gap and eventually bring down the cost, insurance companies can include the expense of the procedure, which can be a huge turnaround for players in the soft tissue allografts market. As a result, it will lessen the financial burden on patients to a great extent, thus increasing demand.

Anterior cruciate ligament (ACL) reconstruction has become a common occurrence among sportspersons, especially in sports such as basketball, skiing, skating, bicycling, and football; sports that involve a lot of jumping. In many cases, where the fall is severe, the player ends up damaging a tendon in the knee. This explains the importance of replacing the damaged tendon. In most cases when players prefer physiotherapy over tissue replacement, the condition often relapses. To prevent this, doctors recommend reconstruction of the ACL. The procedure becomes imminent as players fear losing their spot in the team due to an injury. Based on segments, wound care accounts for the highest share in the soft tissue allograft market, says the TMR study. By revenue, this segment reaped ~ US$ 1.4 Bn in 2014, and is expected to garner ~ US$ 2.6 Bn by the end of 2027, growing at a healthy CAGR of ~ 7%.

Dental procedures account for 30% of the revenue in the soft tissue allografts market, defining the importance of the business in dentistry. As people realize the importance of oral health, routine visits to a dentist has become the norm. While the percentage of the population adopting routine dental check-ups is rising, a large proportion continues to remain ignorant. Poor eating habits and ignorance towards trivial oral issues result in dental cavities and caries. Taking care of one’s teeth also involves taking care of the gums. As awareness trickles down into society, people are going to come forward and report issues with their gums. This trend hints why dentistry, as a segment, will grow at a CAGR of ~ 6.5% during the forecast period.

How Poor Lifestyle will Bring Business

As technology lured people to comfort, leaving no space of life untouched, incidences of lifestyle diseases have only been rising since. While people above the age of 50 are less affected as they still belong to the era of hard work, it is the millennial youth and middle-aged population that seems to be reeling under lifestyle diseases. A ring of three conditions - hypertension, diabetes, and obesity - scarily interconnected, has worried the world, more than any other healthcare problem. The third condition – obesity - forms the basis for a large proportion of degenerative joint disease among patients.

Approximately 2.1 billion people, that is, 30% of the world’s population, is obese, cites a study published in 2019. As a result of obesity, the bones are more stressed, and are at a higher risk of damage in case of an accident or fall. Even a small injury tears up the cartilage or ligament under the bone, thus impelling the need for a soft tissue replacement. As one study after another hints at a substantial increase in obese population in the coming years, the prospects of higher demand for soft tissue allografts will increase. 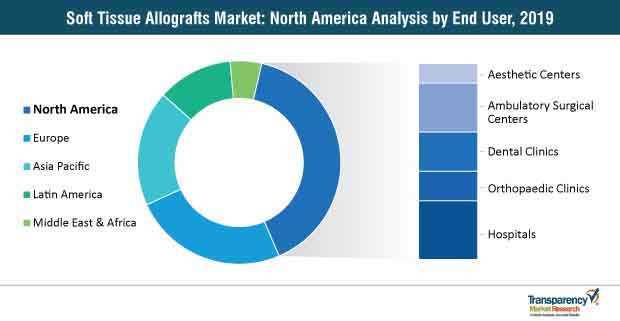 Across healthcare, if companies are working on rolling out new products, then a newcomer in the market will likely boast about a new technology. At the turn of this decade, companies should be looking at opportunities that can make existing procedures safe, easy (for both, doctors and patients), and reduce cost. The procedure for soft tissue allografts, though relatively easy now, still holds space for improvement.

While a healthcare provider provides a patient with both the options – autograft and allograft, along with all the pros and cons, the 'ease of treatment' in allografts catches their eyes. In an autograft, a patient undergoes additional pain and recovery as soft tissue has to be harvested from their own body. In allograft, the tissue is harvested from a donor, thus eliminating the additional burden of recovery. As technology makes the existing allograft procedure smoother and more comfortable, patients will stop looking at autografts as an option. At the same time, as companies and hospitals adopt stringent screening methods to eliminate doubts of bacterial contamination and diseases, patients will start trusting soft tissue allografts more.

While big companies are capable of pumping in cash for new research incentives, smaller companies are keen on partnerships or acquisitions to either launch a new product or expand their operational territories. Our research says that ~ 25% of the market revenue comes from smaller players. 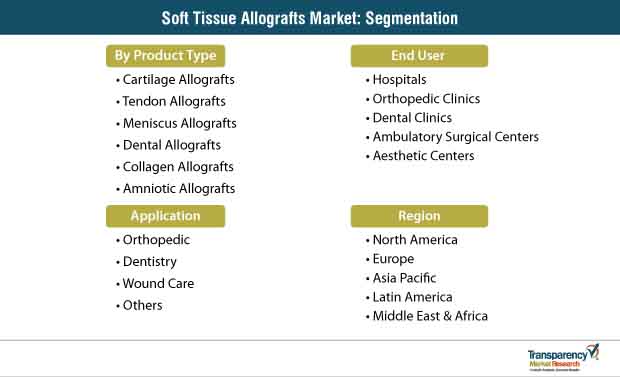 The soft tissue allografts market has found its hold on the back of technological advancements. While most companies in the market will be keen on rolling out products that aid the growth of the market, awareness and growing literacy levels will have a huge role to play too. The level of awareness among people, especially with the increased penetration of the Internet and easy access to social media, has skyrocketed. With time, the soft tissue allografts market will benefit from the growing knowledge about products and the procedure. At the same time, the underlying healthcare trends and the growing importance of sports will maintain a healthy CAGR for the top three segments by application (wound care, orthopedics, and dentistry).

The increasing trend of mergers & acquisitions and product approvals & launches in developing countries is expected to boost the global soft tissue allografts market during the forecast period. Additionally, acquisitions provide growth in core parts of the business.

The extensive report on the soft tissue allografts market begins with a two-page preface that lays down the scope of the report and breaks down the soft tissue allografts market into its respective segments and sub-segments. It also goes on to mention the key objectives of the research carried out by analysts, providing the relevance of information sought under each section.

In the next section, the report on the soft tissue allografts market again dedicates two pages to succinctly explain the research methodology. Here, analysts explain how they have relied on information from multiple sources for secondary research. They also reveal the type of people interviewed for primary research.

After an exhaustive regional analysis, the report then gets into its penultimate section on the competitive landscape in the soft tissue allografts market. Here, analysts explain how major players in the soft tissue allografts market fare, and how strong their presence is. In the pages to follow, the report profiles each company, detailing their basic details, product line, notable developments, and success strategy.

Again, after a long analysis of the competition, the report ends with the key takeaways for stakeholders in the soft tissue allograft market.

Falling under the category of healthcare, analysts understand the importance of extensive research and relevant information to prepare the soft tissue allografts market report. So, they attempt not to ignore authentic and valuable information sources. Secondary research is based on information from stock exchange portals, company websites, government organizations, and research studies. Analysts then breaks down their approach for primary research, where they say that 42% information came from managerial level employees of key players in the soft tissue allografts market. This helped understand the ground-level situation. On the other hand, 33% information is listed based on interviews with top level executives that makes the report insights-heavy.