Rice syrup is the liquefied and processed form of malted rice. Rice syrups are processed by breaking down the starch derived from the carbohydrates in the rice. Due to the presence of an excessive concentration of starch, rice syrups are used as sweet enhancers or sweeteners. These rice syrups are manufactured from brown and white rice. The brown rice is the whole-grain rice with an edible bran layer that contains a high amount of nutrients such as proteins, potassium, magnesium, vitamin B-6, and others. As brown rice has a less glycemic index and high nutrition, it has wide utilities when processed as a sweetener. However, the nutritional values are slightly reduced while processing and refining brown rice syrup. White rice is milled, wherein the edible bran layer is removed and the grain is polished. Due to excessive polishing and milling, some nutritional values of white rice are lost. However, white rice contains an adequate amount of potassium, calcium, iron, etc. Due to its white color, processed white rice syrup remains transparent, enabling it to be used in various industrial applications. As a natural sweetener, rice syrup has a huge application in the food processing industry to add sweetness to any processed food. Rice syrup is increasingly used in confectionaries, bakeries, beverages, dairy products, dressings, and infant formulae, and food services such as hotels, restaurants, and cafes. Due to the increasing health consciousness among consumers for organic food ingredients and products, rice syrups are increasingly being processed from organic rice. 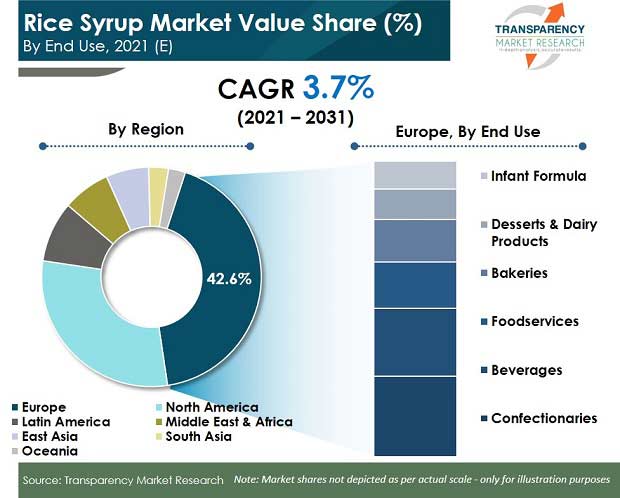 The increasing use of rice syrup in developing an alternative ingredient for table sugar and sweeteners has fuelled its popularity among consumers in recent years. Growing demand for organic and natural sweeteners has been observed, owing to the increasing health consciousness among consumers and product developers. However, there are very few natural sweeteners available in the market right now. Due to this, it is expected that there will be launches of new products with natural ingredients, such as rice syrup, which is anticipated to drive the growth of the global rice syrup market during the forecast period. In Europe, rice syrup is the most preferred natural sweetener used in food processing industries.

There has been rising demand for rice syrup from food service industries such as hotels, quick service restaurants, and cafes in recent years. As a natural sweetener, rice syrup plays an important role in providing sufficient sweetness to various foods such as pancakes, muffins, salads, chilled beverages, and others, making them delicious succulents. In the food service industry, rice syrups are also used for dressing and decorating these foods in order to attract consumers.

With an increase in agriculture across the globe, natural ingredient cultivation has been witnessing a surge. Along with the increasing production of rice for staple consumption, brown rice, as a natural ingredient, has witnessed great demand for its industrial processing as a sweetener. This is primarily attributed to the increased awareness about the benefits of crops such as brown rice in recent years.

Due to rapid urbanization, it is anticipated that the processed food market will witness significant growth in the near future. However, the development of re-formulated products to replace table sugar is expected to drive the demand for these products in the coming years. In addition, consumer demand for convenience is increasing, which is the major driver for specialty ingredients, as these offer functionalities such as extended shelf-life, stability, and texture. This has led manufacturers to focus on development initiatives to offer clean label ingredients such as rice syrup to consumers.

The demand for plant-based sweeteners or products with natural ingredients is a key area for companies to sustain in the consolidated rice syrup market. Furthermore, the use of rice syrups in beverages and packaged food is expected to penetrate the existing as well as new or untapped markets across the world. Further, new product offerings, especially in the U.S., where rice syrup has been recently adopted as a sweeter, is expected to boost the growth of the rice syrup market in the near future.

Backward integration from manufacturers to raw material suppliers would help in improved quality and profit margins, and provide a competitive advantage to manufacturers. Also, companies such as Habib-ADM Limited have entered into long-term agreements with farmers. This enables companies to produce high-graded rice using their patent technology, thus, enhancing the quality of rice syrup, along with an economic cost.

Rice syrup is defined as the processed form of cultured rice, wherein, the rice is fermented using enzymes such as beta- and alpha amylase, which helps in the breaking down of starch to simple sugar molecules such as glucose, fructose, and maltose. These sugars are further processed by protein fractioning and refining in order to extract sweetening agents from the malted rice. These sugars are liquefied and are then used as an industrial sweetener in food processing. Due to the growing health consciousness among consumers for organic food ingredients and products, rice syrups are increasingly processed from organic rice to manufacture organic rice syrups.

The report explores the global rice syrup market for the period 2019-2027. The principal objective of the rice syrup market report is to provide insights into key developments in the market that are constantly supporting the transformation of global businesses that are associated with rice syrup. It is very important to consider that, in an ever-wavering economy, we provide the estimated (Y-o-Y) year-on-year growth rate in addition to the Compound Annual Growth Rate (CAGR) for the overall forecast, to understand the better analysis and evaluation of the global rice syrup market, and to discover justifiable opportunities.

The unique key feature of this report is that, the evaluation of the global rice syrup market and its relative revenue forecast is carried out in terms of absolute dollar opportunity. This is usually not considered while forecasting overall market value. Absolute dollar opportunity analysis is very crucial in evaluating the intensity of opportunity that a provider can observe to execute, as well as to contrast the potential resources from a sales perspective in the global rice syrup market.

To analyze the overall market size of rice syrup, the report considers various preliminary aspects based on secondary research. Furthermore, it highlights quantitative estimation such as market share by nature, raw material type, end use, and region, and other qualitative data from primary respondents, which have been integrated to arrive at unambiguous and accurate market estimations. The forecast presented in the rice syrup market report arrives at the total revenue being generated, and the expected revenue contribution in the future by the global rice syrup market.

The subsequent sections analyze the global rice syrup market on the basis of region, nature, raw material type, and end use