Since several government and commercial organizations are functioning in a combination of in-office and remote working protocols, the demand for quantum key distribution (QKD) has gained an impetus during the COVID-19 pandemic. The vulnerability of valuable information has increased during the pandemic, since cyber criminals have gained awareness about high priority data exchanges taking place online in financial, airline, defense, and government organizations. Such trends are generating incremental opportunities for stakeholders in the quantum key distribution market.

New developments during the pandemic, such as ISRO’s recent successful demonstration of free-space quantum communication over a distance of 300 meters for the first time in India are grabbing attention of stakeholders. Companies in the quantum key distribution market are taking cues from such developments to advance in live video conferencing using quantum key encrypted signals. 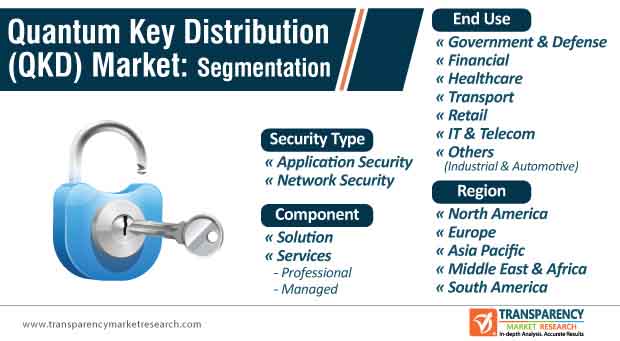 Today’s digital society is highly dependent on the security of data, both during communication as well as in storage in areas such as e-business, e-banking or e-government channels. However, with the progress of quantum computers, the risk of breaking this security is potentially increasing. Investment in continuous R&D is the key for companies in the quantum key distribution market to gain proficiency in critical infrastructure to ensure long term security in various end-use cases.

Reliable network infrastructure is estimated to increase uptake of the QKD technology. Digital security professionals and scientists are working toward technologies and solutions that boost industrial interest in QKD-enabled solutions.

Competition in Space-based Quantum Communications Can Lead to U.S.-China Agreement

The quantum key distribution market is expected to advance at a striking CAGR of ~22% during the forecast period. Stakeholders in the U.S. and China have entered a cut-throat competition in quantum data security. A team of Chinese technicians, engineers, and scientists has been gaining popularity for sending pairs of photons from a single satellite called Micius to two ground stations in China, separated over 1,120 kilometers.

The U.S., on the other hand, is witnessing an increase in its reliance on the secure flow of data, which is creating incremental opportunities for companies in the quantum key distribution market. Since both countries are taking interest in space-based quantum communications, a possible U.S.-China agreement in managing the competition in space is predicted to take shape.

The quantum key distribution market is projected to reach US$ 1.1 Bn by the end of 2030. Toshiba Corporation - a Japan-based multinational conglomerate is eyeing a US$ 3 Bn revenue in quantum cryptography by 2030. Stakeholders are increasing their focus on the advanced cryptography technology for data protection applications. Finance, defense, and healthcare are forming key focus areas for digital security professionals and scientists in the market who are unlocking growth opportunities to decipher conventional math-based cryptographic keys.

There is a global demand for advanced cryptographic technologies, as cyber security has become a top priority in national defense applications. This is evident since government & defense end use is expected to dominate the second-highest revenue in the quantum key distribution market during the assessment period.

Stakeholders in the quantum key distribution market are tapping revenue opportunities in IT and telecom end uses. SK Telecom Co., Ltd. - a South Korean wireless telecommunications operator, is being highly publicized for bringing quantum computing to the masses with the Galaxy A Quantum, a first-of-its-kind 5G smartphone equipped with a quantum random number generator chipset.

Companies in the quantum key distribution (QKD) market are setting their collaboration wheels in motion to innovate in smartphones that feature quantum enhanced cryptography that generates true random numbers that cannot be hacked. QKD is estimated to gain prominence in blockchain-based wallet to store and secure electronic documents such as certificates and insurance claims. 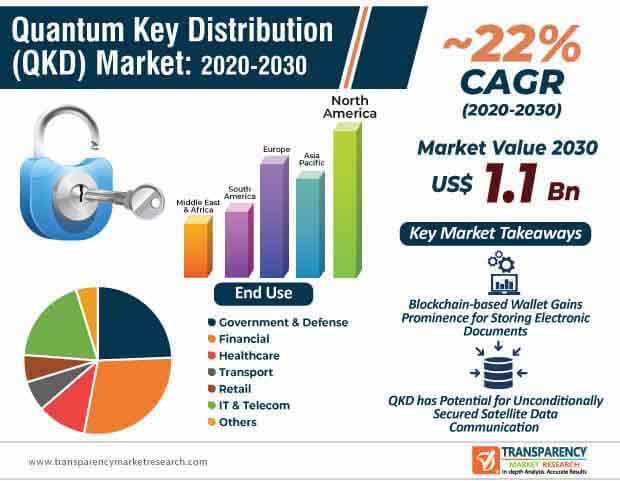 Stuck in a neck-to-neck competition with other brands? Request a custom report on Quantum Key Distribution Market

As cyber security crimes are on the rise during the ongoing COVID-19 pandemic, the demand for data protection using advanced cryptographic technologies is surging. QKD is paving the way for unconditionally secured satellite data communication using quantum technologies. However, integrating QKD systems into the existing network infrastructure is potentially challenging. Hence, multidisciplinary teams of telecommunication equipment manufacturers and critical infrastructure providers must invest in R&D to make QKD systems more compact, cost-efficient, and capable of operating in existing network infrastructure and over long distances. As such, China is seen aggressively expanding their network infrastructure for QKD, including quantum satellites that relay quantum signals.

The study covers a detailed segmentation of the quantum key distribution market, along with country analysis, key information, and a competitive outlook. The report mentions company profiles of key players that are currently dominating the quantum key distribution market, wherein various development, expansion, and winning strategies practiced and executed by leading players have been presented in detail.

The report provides detailed information about the quantum key distribution market on the basis of a comprehensive research on various factors that play a key role in accelerating the growth potential of the market. Information mentioned in the report answers path-breaking questions for companies that are currently functioning in the market and are looking for innovative ways to create a unique benchmark in the quantum key distribution market, so as to help them make successful strategies and take target-driven decisions.

The research methodology adopted by analysts to compile the quantum key distribution market report is based on detailed primary as well as secondary research. With the help of in-depth insights of the industry-affiliated information that is obtained and legitimated by market-admissible sources, analysts have offered riveting observations and authentic forecasts of the quantum key distribution market.

During the primary research phase, analysts interviewed industry stakeholders, investors, brand managers, vice presidents, and sales and marketing managers. On the basis of data obtained through the interviews of genuine sources, analysts have emphasized the changing scenario of the quantum key distribution market.