Global Well Intervention Market Estimated to Reach above US$ 10 Bn by 2026; Discovery of New Wells to Play an Important Role in Market Growth: Transparency Market Research

The global well intervention market was valued at nearly US$ 6 Bn in 2017 and is anticipated to expand at a CAGR of more than 6% from 2018 to 2026, according to a new report titled ‘Well Intervention Market - Global Industry Analysis, Size, Share, Growth, Trends, and Forecast, 2018 –2026’ by Transparency Market Research (TMR) . Rapid depletion of oil reserves is influencing the outlook of the global oil and gas industry. Hence, efforts are being undertaken to explore new oilfield reserves, particularly in North Sea, South China Sea, Gulf of Mexico, and the Persian Gulf, in order to cater to this ever increasing demand. This, in turn, is anticipated to offer substantial expansion opportunities to the well intervention market in the near future. 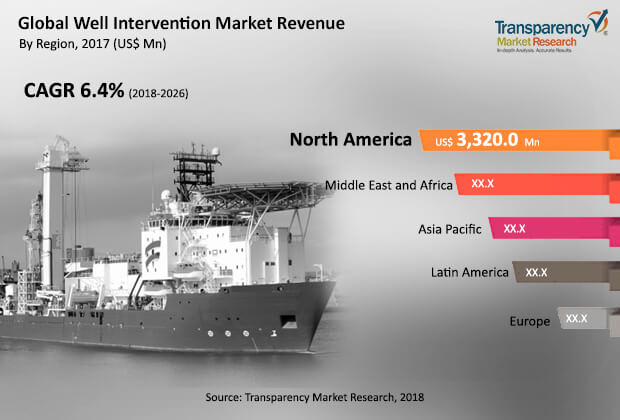 Excess depletion of onshore oil and gas assets has shifted the investments from onshore to offshore oil and gas assets. Rise in demand for energy and increasing expenditure in the shallow, deep, and ultra-deep water oil & gas assets are expected to propel demand for well intervention services. Several key players in the oil and gas industry are investing heavily in offshore assets. Thus, a move from onshore to deep-water offshore drilling is expected to gain momentum, led by major international oil and exploration & production companies that stand to uncover large discoveries and are willing to pour substantial dollars into exploration efforts. More than 70% of new discoveries have been found in offshore areas.

Declining prices of crude oil could have an adverse effect on well intervention services across the globe. Governments of several nations have imposed strict norms and guidelines related to carbon emissions, which has led to a shift in investments into the renewable energy sector. Governments of several countries are providing subsidies related to generation of renewable-based power, boosting the renewable energy sector.

North America dominated the global well intervention market in 2017 and the trend is expected to continue over the forecast period. The U.S. has drilled more than 14,000 wells in 2016 and is expected to explore more oil and gas wells in the near future. The U.S. upstream market is a complex combination of technical, financial, political, and logistical factors. Increase in exploitation of unconventional reserves is likely to boost demand for well intervention in the near future. Among unconventional plays, the Permian basin will certainly lead to U.S. supply growth.