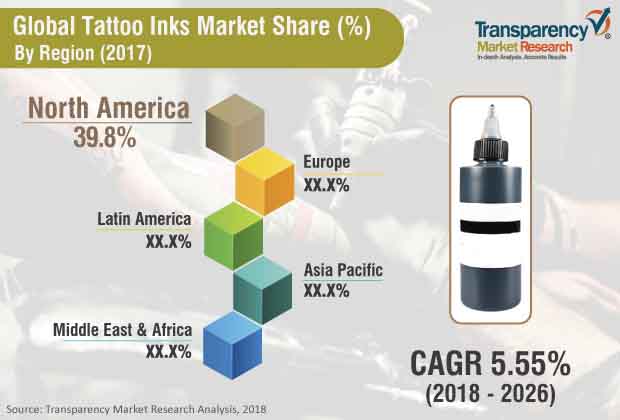 Rise in Demand for Tattoos among Youngsters to Boost Market

Tattooing is an increasing fashion phenomenon that has attracted more than 100 million young adults across the globe to date. According to the Council of Europe, one in five individuals in the U.K. is tattooed. The figure rises to one in three among young adults. About 12% of people in Europe and up to 24% of people in the U.S. are tattooed, which includes teenagers also. About 20% to 30% of youngsters in Europe and almost 40% of youngsters in the U.S. have tattoos. The number is even higher in Germany and the Netherlands and it is expected to double by the end of the forecast period. This trend is estimated to continue in the next decade, thereby driving the global tattoo inks market. The popularity of tattooing is significantly less among people aged 50 years and above. Fewer than 10% of people in this age group opt for tattoos. About 37% of tattooed individuals in Denmark got their first tattoo when they were less than 20 years’ old. This percentage rises to 44% and 18% among teenagers aged less than 18 years in France and Germany, respectively. Currently, women account for a major share of the tattooed population in Denmark, Italy, and the U.S. The trend of tattooing is more noticeable among adolescents and youngsters in Europe and North America.

The popularity of tattoos has risen over the last few years. However, this has led to concerns about the safety of tattoo inks, which may entail infectious and non-infectious risks. Tattoo inks may contain hazardous chemical ingredients and microbiological agents. They may be applied under poor hygiene conditions. According to the European Academy of Dermatology and Venereology, tattoo inks consist of pigments and dyes, additives, nanoparticles of heavy metals, and hazardous impurities arising from the production process. This may pose potential risks in terms of bacterial contamination, allergies, toxic effects, and even cancer. The European Academy of Dermatology and Venereology has an evidence that traces of tattoo inks can be found in draining lymph glands and they can be detected in mice livers in laboratory tests. More than 60% of chemicals in tattoo inks are azo pigments, a type of compound which, after being injected, can break down by ultra-violet exposure and spread potentially cancer-causing particles to other parts of the body. Tattoo inks also contain several chemicals such as formaldehyde glycerol and isopropyl alcohol. If these chemicals go deep into the skin, the skin becomes more permeable. In other words, chemicals used in the tattoo ink are harmful and they can directly affect the blood circulation in the body.

Based on region, the global tattoo inks market has been classified into North America, Europe, Asia Pacific, Middle East & Africa, and Latin America. In terms of value and volume, North America was a leading region of the global market in 2017 and the market in the region is anticipated to expand at a rapid pace during the forecast period, owing to rise in the number of tattoo parlors and presence of major manufacturers of tattoo inks in the region. Europe and Asia Pacific are significant consumers of tattoo inks. According to the Council of Europe, more than 60 million people in the European Union were tattooed in 2017. Europe is expected to be a highly lucrative region of the global tattoo inks market during the forecast period, owing to technological advancements in tattoo removal methods and tattooing machines. The tattoo inks market in Middle East & Africa and Latin America is projected to expand at a sluggish to moderate pace during the forecast period. Demand for tattoo inks in these regions is anticipated to rise in the next few years, due to anticipated rise in the demand for tattoos from youngsters in these regions.