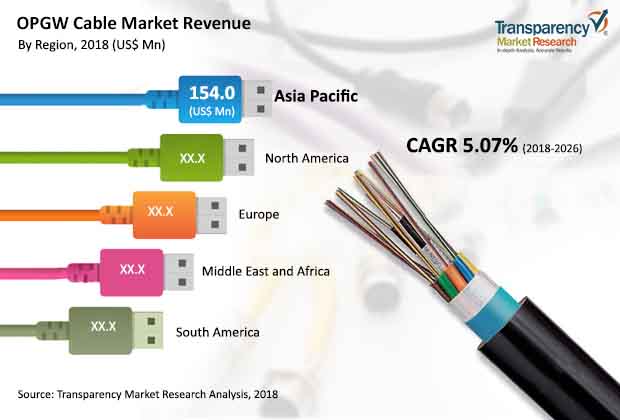 The OPGW cable market is primarily driven by the growing demand for electricity from the emerging economies, especially China and India. According to the International Energy Agency (IEA), about two thirds of the energy growth comes from countries in Asia such as India and China and electricity is one of the fastest growing forces for the end use of energy. As this rising demand for electricity is met, electricity utility companies will increase their transmission and distribution network to make electricity available to people across these regions. This will stir the demand for OPGW cables which would be deployed on the top of the towers to offer protection to power cables against faults, short circuit current, and lightening. However, the high cost of installation and upgrade of existing ground wire of OPGW cables might be a hindrance to the growth of the OPGW cable market. Nonetheless, the growing popularity and widespread adoption of OPGW cables by electric utility companies is anticipated to affect the OPGW cable market positively.

In terms of geography, the market has been divided into North America, Europe, Asia Pacific, Middle East & Africa, and South America. In 2017, Asia Pacific was the topmost revenue generating region followed by North America. The market in Asia Pacific is expected to expand at the highest CAGR from 2018 to 2026 due to the growing demand for electricity from countries such as India and China. Furthermore, the growing appetite for high speed internet is also expected to fuel the OPGW market growth. OPGW cables used along the transmission line can be used by electric utility companies to enable the transmission of high speed data over long distances by leasing out the OPGW cables to telecom companies.

The OPGW cablemarket has been segmented as below: