Global Methanol Market to Clock Value US$131,344.3 mn by 2026-end, with Rising Applications in Automotive and Construction Sector

The global methanol market depicts a fragmented vendor landscape, notes Transparency Market Research (TMR). This is due to the active participation of several large, medium, and small players in the market. Some of the prominent names of the companies in the global methanol market include SABIC, Methanex Corporation, Mitsubishi Chemical Holdings Corporation., and Mitsui Chemicals.

Various uppermost companies in the global methanol market are highly investing in research and development for devising cost-effective and efficient techniques in order to produce methanol. Such strategic alliance further helps in boosting the production of methanol to a high extent. Therefore, it also serves the enormous demand for the growing applications of methanol. Other growth strategies adopted by the players to stay ahead of the competitors include mergers and acquisitions. Such joint ventures help market players in expanding their geographical boundaries along with accentuating their footprint into the global methanol market.

As per the estimation by TMR experts, the global methanol market is expected to gain an impressive value of US$131,344.3 mn by the end of 2026. Experts’ project this growth is prophesied to occur at an impressive CAGR of 5.4% during the assessment period from 2017 to 2026.

From the perspective of end use, the formaldehyde segment showcases the largest share in the global methanol market and is also expected to boost the market during the forecast period. This is because of its high use in a wide range of industries such as furniture, construction, textiles, coatings, and automotive. Region wise, APEJ is expected to lead the global methanol market in the coming years. This is attributed to high demand for methanol for producing olefins and rapid industrialization in the region. 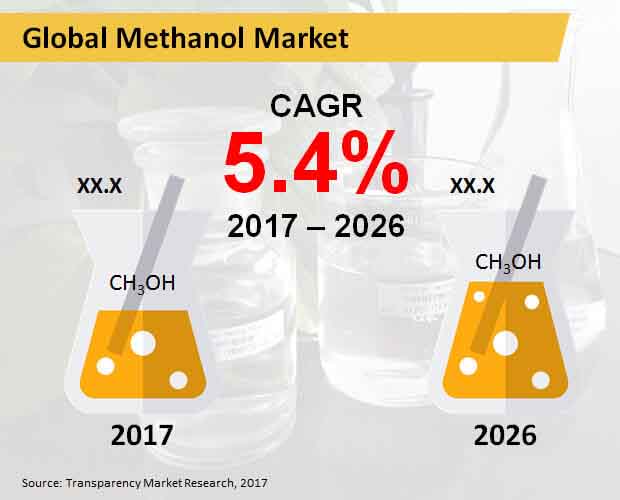 Methanol is mainly a light flammable liquid which can be manufactured through using oil, natural gas, and even renewable resources. Methanol is highly utilized as an alternative fuel due to its high octane rating and good blending properties. Such USPs are majorly driving the global methanol market. There are several methanol derivatives available in the market include acetic acid, formaldehyde, gasoline, dimethyl ether, methanol to olefins, and solvents. Rapid adoption of one of the methanol derivatives, formaldehyde in several end-use industries such as building and construction, cosmetics, automotive, personal care, and healthcare is also fueling growth in the global methanol market.

Furthermore, methanol is extensively used as a fuel in automobile industry for improving engine performance. It also helps in enhancing fuel efficiency. Rising demand for lightweight vehicles for reducing the rate of carbon emissions is another factor augmenting demand for methanol, which in turn is also boosting the global methanol market. Methanol is highly used in building and construction industry for manufacturing engineered wood products. Thus, growing commercial and residential construction activities and rising standard of living is also propelling expansion in the global methanol market.

A major challenge hindering the growth of the global methanol market includes the high cost involved during the conversion of methane into liquid. Such limitations are obstructing methanol applications in a wide array of industries. Nonetheless, persistent demand for biofuels and bio-diesels in various automotive industries is believed to help overcome some challenges in the near future. Thus, such demand is expected to boost the global methanol market.

The segmentation of global methanol market is based on: