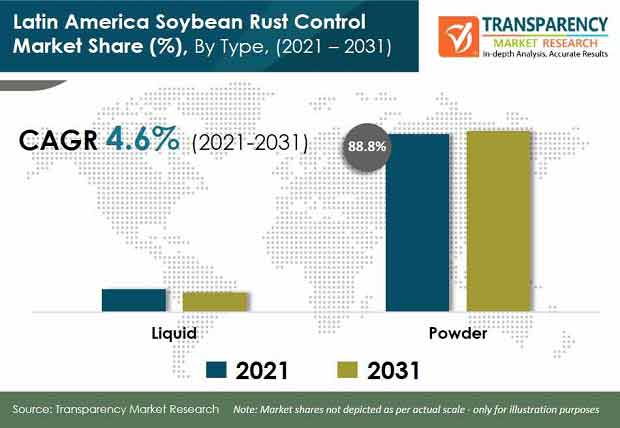 Consumers nowadays are leery of what they include in their diet. Plant-based products are one of the most lucrative markets in today's time. Consumers are more attracted to the intake of such products due to their health benefits. Soybean is high in demand due to its richness in nutrients and health benefits. Soybean is rich in vitamins, minerals, protein, and fiber. As its demand is increasing, its production is increasing at a decent rate. However, the challenge of handling its rust also magnifies, hence the need for soybean rust control signifies. Rust control is a matter of top concern for the manufacturers. The need for soybean rust control is of top priority. Hence, the demand for soybean is directly boosting the market growth of soybean rust control.

The awareness regarding the benefits of soybean has been on the rise for the past few years. The consumption of soybean is also increasing, and it is finding its application in various different industries. Apart from humans, some of the animals also rely on soybean for protein requirements for living. It is becoming a regular practice in countries such as the U.S. for feeding soybean to pets and in poultry for the required protein intake.

Apart from this, soybean also finds its use for industrial purposes. Soybean oil and meal can replace petroleum and other volatile ingredients in many industrial and consumer products. It is one of the major ingredients used in the production of biodiesel.

This increased use of soybean in different industries and applications has led to the rise in the demand for soybean rust control products and is fueling market growth.

Concerns of Manufacturers Regarding High-cost Pesticides May Hamper Market Growth

Soybean rust control acts as a barrier in the large-scale production of soybeans, thus, driving the sales of fungicides that protect soybeans from diseases. This factor contributes to the growth of the soybean rust control market on a global scale.

The highly functioning pesticides take years of research, innovation, and other screening processes, which consume a very high amount that results in higher cost of these rust control pesticides. Moreover, with continuous losses in the production of soybean due to regular rust has led to more investments in R&D for better soybean rust control product development, which would eventually lead to expensive pesticides. This would be the major problem for the small farmers to buy such expensive products. Hence, the high price of pesticides is one the major factor hampering the growth of this market.