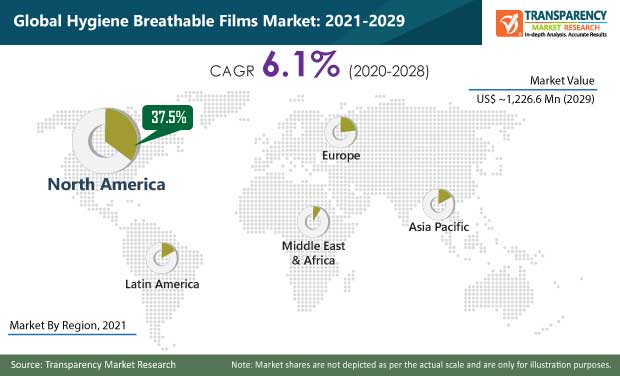 The presence of billions of micro pores in a water barrier microporous breathable films is a common feature, and countless of these micro pores are connected. As pores are smaller than a drop of water, water droplets such as rain are unable to pass unless extreme pressure is applied. For instance, a Japan-based manufacturer of textiles, chemicals, and fibers named Toray Industries has developed a microporous polylactic acid (PLA) film. The company effectively substituted conventional polyethylene films with the microporous PLA films or biomass-based biodegradable polymer made from vegetable starch.

Stretched polyolefin hygiene breathable films offer better water vapor transmission, making diapers more comfortable to use. The relative humidity and temperature with diapers or other hygienic products such as sanitary pads and adult diapers can be reduced using laminates of breathable films and nonwoven webs.

Moreover, Asia Pacific is expected to witness lucrative market growth opportunities, as the region is currently experiencing a baby boom coupled with the rising per capita income and growing awareness for health & hygiene. Consumers in the region are increasingly referring to premium diapers for use.

Key players in the market are focusing on developing biodegradable and compostable hygiene breathable films for diapers. Film manufacturers also witness lucrative growth opportunities in the sanitary napkins segment. The sanitary napkin market in developed regions such as Europe and North America has been aided by variation and advancements in product design. On the other hand, in developing countries, aggressive marketing, rising educational levels, and several governments and non-governmental programs to raise knowledge about the benefits of utilizing hygiene products are helping to raise awareness. This has led to an increased demand for sanitary napkins, this driving the hygiene breathable films in developing regions.

As traditional sanitary napkins have a negative influence on the environment when disposed of in landfills, manufacturers are likely to make biodegradable and compostable sanitary napkins. Research shows that around 35% of women in India use sanitary napkins, commercially or locally produced and the rest of the women do not use sanitary napkins. Countries, including Thailand, Indonesia, and China have achieved over 50% penetration in the hygiene breathable films market. As people’s purchasing power is expanding, along with their knowledge of personal cleanliness, there are enormous chances for companies to expand into the Asian Pacific market.

The tier structure is formulated on the basis of segmental revenue and market share of the company. As per the tier structure, Trioplast Group and RKW Group are tier 1 players in the hygiene breathable films market. These companies are adopting key strategies such as business expansion, acquisition, and product launch to strengthen their position in the hygiene breathable films market. Moreover, tier 2 players are Schweitzer Mauduit International, Inc., Berry Global, Inc., and Kimberly-Clark Corporation.