The global tumor ablation market is extremely and fragmented due to the prevalence of numerous players of small, medium, and large size, states Transparency Market Research (TMR) in a research report. With the market holding massive potential for development, several pharmaceutical companies are striving to enter the global tumor ablation market. The entry of new players is expected to intensify the competition in the market and will push players to focus on new technological developments in order to satisfy the present customer base and further expand their geographical reach as well. The crème vendors in the market are also expected to get into strategic partnerships and marketing tactics in order to strengthen their position in the market for the long run. Some of the top players in the market are Medtronic, BTG International, Boston Scientific, BVM Medical, and Jude Medical. 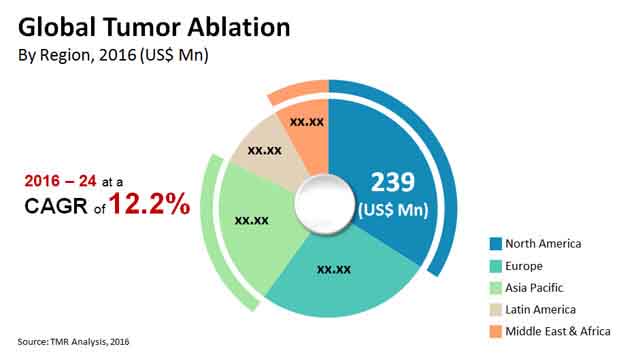 Region-wise, North America dominated the global tumor ablation market in 2015 with a share of 30% in the same year. The dominance of the North America can be attributed to the early deployment of the treatment process. Thanks to the advancements in technology, high incidence rate of cancer, and growing geriatric population base, the region is expected to stay at the topmost position in the coming years as well.

The growing number of cases across the globe has led to significant rise in the demand for tumor ablation technology. According to a study conducted by the World Health Organization (WHO), almost 8.8 million people died of cancer in 2015. It became the second leading death causing factor in the world. As tumor ablations are extremely efficient in treating cancer effectively with less side-effect, its popularity is likely to rise among patients as well as medical professional. This is expected to lead to a rise in the uptake of tumor ablation technology in the coming years. The other most prominent factor that is expected to add up to the growth of the global tumor ablation market is the incessant advancements in technology. Furthermore, patient inclination towards minimally invasive processes is expected to act as a support system for the market regarding its growth. However, the progress of the market might be hindered due to the dearth of favorable reimbursement policies and expensive research and development related to this field.

The global tumor ablation market has been segmented as follows: