According to a new market research report titled ‘Extreme Ultraviolet Lithography Market - Global Industry Analysis, Size, Share, Growth, Trends, and Forecast, 2018–2026,’ published by Transparency Market Research, the global extreme ultraviolet lithography market is expected to reach value of US$ 3,807.5 Mn by 2026, expanding at a CAGR of 26.8% from 2018 to 2026. According to the report, the global market is expected to be influenced by a range of macroeconomic and market-specific factors during the forecast period. In terms of demand, Asia Pacific is projected to lead the global market, with the market in the region expanding at a CAGR of 28.6% between 2018 and 2026. Advancements in the miniaturization of electronic devices and reduced number of masking layers are anticipated to significantly drive the market during the forecast period. 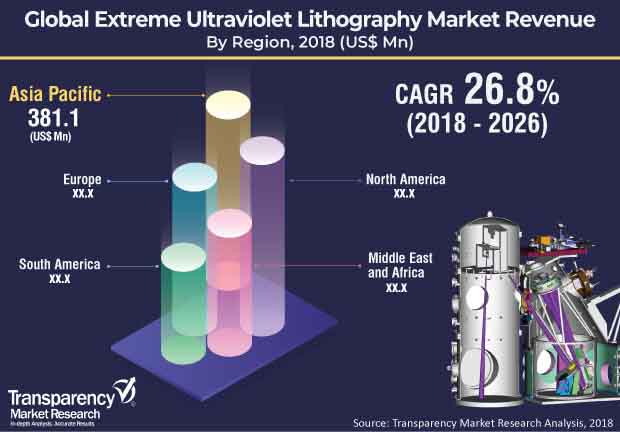 The research study includes profiles of leading companies operating in the global extreme ultraviolet lithography market. Market players have been profiled in terms of attributes such as company overview, financial overview, business strategies, and recent developments. Currently, only one player i.e. ASML Holding N.V. operates in the global EUVL market. However, in the next few years, companies such as Intel Corporation, Samsung Electronics Co., Ltd., Taiwan Semiconductor Manufacturing Company Limited (TSMC), Canon, Inc., Nikon Corporation, and Carl Zeiss AG are expected to invest in the market.

The global extreme ultraviolet lithography market has been segmented as follows: