Auger drilling is a hole drilling method through a gouging or cutting motion with the chiseled tip of the drill bit. This type of drilling is commonly used for geotechnical and environmental sampling as well as mining and construction applications. These augers are available in various sizes; the small augers are used for smaller projects which are mounted on trucks, while larger augers are used for building bridge foundations, especially for sinking piles. 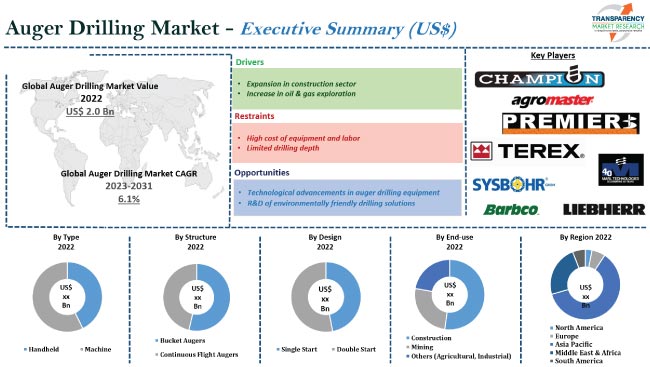 The global construction output was valued at US$ 8.8 trillion in 2016 and is expected to reach US$ 10.1 trillion by 2021. Construction activities in emerging economies surpassed the advanced economies in 2014, and the difference is expected to further increase. The global construction industry witnessed expansion at a CAGR of 2.4% in 2016. The industry is expected to expand at a CAGR of 2.8% in the next five years. Improvement in existing infrastructure and roadways is anticipated to fuel the demand for auger drilling during the forecast period.

The machine segment of the auger drilling market is expected to witness a CAGR of 6.2% over the forecast period as drilling activities in construction and mining activities would mainly be fulfilled by machine applications. The handheld segment is expected to account for about 23% of the industry by 2026 with a CAGR of 5.4% from 2018 to 2026. Increasing adoption of DIY (Do-It-Yourself) trend is expected to support the growth of the handheld augers segment over the forecast timeline.

Construction industry will dominate the end-use industry in terms of both value and volume as deep foundations require continuous flight augers and bucket augers drillings in order to make the construction earthquake resistant. Both infrastructure and building applications use hollow stem and solid stem augers for deeper and effective borings. Hollow stem augers support the foundation drilling by directly pouring the concrete when pulling the auger drill out simultaneously.

Asia Pacific is expected to account for majority of the share of the construction industry as it includes the huge markets of China, India, and Japan. However, the growth pace will be slow in China given the relative sluggishness in its construction industry. The emerging Southeast Asia markets will invest heavily in new infrastructure projects, supported by private investments.

The economic expansion in Europe is likely to be influenced by political issues in the region. The economy of Europe is expected to expand at a steady pace of 2% year-on-year. The U.K. is set to leave the EU in 2019, and negotiations regarding how the U.K. is anticipated to exit are likely to strain ties between the members of the EU and the U.K. The Eastern Europe construction industry is projected to be relatively weak as compared to other regions, owing to the troubled state of the economy of Russia, political & economic uncertainty, and weak commodity prices. Delays in disbursement of EU funding have recorded sharp contractions in Hungary, Poland, and the Czech Republic.