The concept of skin sterilization is gaining increased importance amidst the ongoing COVID-19 pandemic. Moreover, the revenue of skin sterilization application segment of the povidone iodine market is projected for aggressive growth during the forecast period. Thus, betadine antiseptic products hold promising potentials in reducing the number of microorganisms on the skin. 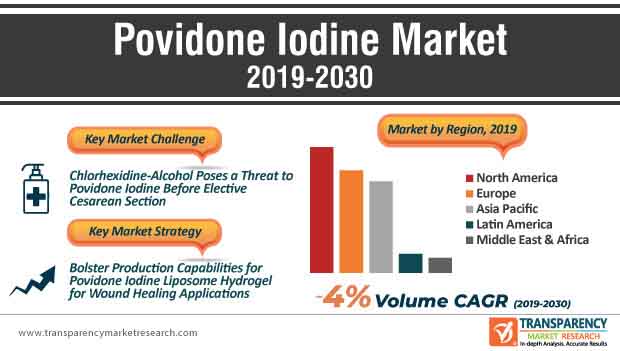 To gauge the scope of customization in our reports Ask for a Sample?

Nasal decolonization is a common practice to control and prevent the spread of methicillin-resistant staphylococcus aureus (MRSA) infections. As such, intranasal mupirocin ointment and chlorhexidine wash are considered as the gold standard for the treatment of MRSA infections. However, resistance and failure associated with these treatment strategies are encouraging the use of povidone iodine (PVP-I) as an alternative decolonization agent for the treatment of the MRSA infection. Hence, companies in the povidone iodine market are boosting their production capabilities to increase the availability of PVP-I, where the market is estimated to cross the volume of ~16,000 tons by the end of 2030.

Povidone iodine holds potential in the treatment of MRSA infections, owing to its rapid and superior bactericidal activity as compared to intranasal mupirocin ointment and chlorhexidine wash. Companies in the povidone iodine market are increasing the applicability of PVP-I in reducing the incidences of surgical site infections (SSI) during orthopedic surgeries.

Antiseptic formulations are being highly publicized as effective vaginal antiseptic solutions. Among cetrimide and metronidazole, even povidone iodine is found to significantly reduce the risk of endometritis in women after childbirth. As such, the povidone iodine market is estimated to reach a value of ~US$ 256.7 Bn by the end of 2030. This is evident since povidone iodine products are pervasively replacing most saline solutions.

Povidone iodine 1% holds high probability of being one of the most effective solution for the prevention of endometritis. On the other hand, companies in the povidone iodine market are increasing the applicability of PVP-I in order to prevent secondary outcomes of postoperative wound infection and fever associated with endometritis. Companies are tapping into incremental opportunities with the help of povidone iodine in applications such as presurgical vaginal irrigation to prevent postoperative wound infections and fever in women. 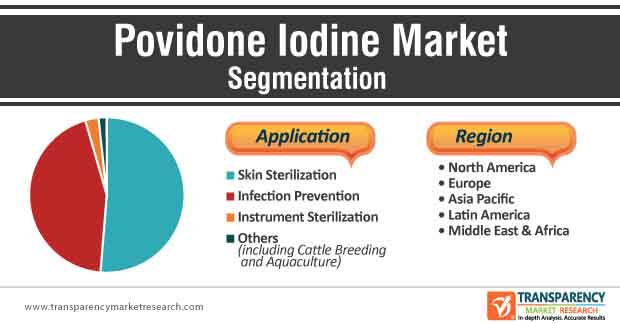 There is a growing demand for a combination of anti-infectious therapy and a healing-promoting moisturization in topical drug formulations. Hence, manufacturers are increasing their production capabilities for povidone iodine liposome hydrogel that allows both antiseptic and moist treatment. Pharmaceutical formulations typically involve a complex of PVP-I (3%) and phosphatidylcholine in a hydrogel. Manufacturers are investigating a direct interaction of the povidone iodine liposomes with microorganisms by attaching to the cell surface to evaluate the antimicrobial activity.

Povidone iodine is proving as a game changer in infection treatment. However, alternative compounds such as molecular iodine (I2) products pose as a threat to the sales of povidone iodine in dentistry. For instance, ioTech International- a specialist in molecular iodine R&D, has revealed its patented stable aqueous formulation of I2, which contains several parts per million (ppm) as compared to povidone iodine. Hence, companies in the povidone iodine market are focusing on skin sterilization applications in order to create revenue streams.

Advantageous attributes of low cost povidone iodine such as low systemic toxicity and easy application are playing a vital role in the removal of tooth-surface dental-plaque biofilms. As such, there is a growing demand for dental devices containing antimicrobial agents for the management of bacterial pathogens.

Looking for Regional Analysis or Competitive Landscape in Povidone Iodine Market, ask for a customized report

Gargling with both povidone-iodine and chlorinated tap water is acquiring increased importance amidst the COVID-19 outbreak to prevent the risks of upper respiratory tract infections. Manufacturers in the povidone iodine market are improving their designing and formulation capabilities to tap revenue opportunities in dental devices and PVP-I induced dental floss products. Since chlorhexidine-alcohol (CA) is an alternative to povidone iodine before elective CS (cesarean section), companies should increase their production capabilities, as low cost of PVP-I offsets the advantages of CA. PVP-I liposome hydrogels are being highly publicized for use in wound healing applications, owing to its advantage of enhanced epithelization.

Key indicators of market growth, which include value chain analysis as well as supply chain analysis and compounded annual growth rate (CAGR) have been elucidated in TMR’s study in a comprehensive manner. This data can help readers interpret quantitative growth aspects of the global povidone iodine market during the forecast period.