The rising demand for meat across countries of Asia Pacific, Latin America, and Rest of the World has led to an increased demand for veterinary antiseptics. The growing number of fitness-conscious people shifting their preference towards a protein-rich diet have spurred a high demand for animal healthcare.

Furthermore, the rising disposable income levels that are allowing consumers to spend on various types of meat are also contributing to the revenues of the veterinary antiseptics market in Asia Pacific, Latin America, and Rest of the World in many direct and indirect ways. Antiseptics are used to heal wounds, prevent infections, sepsis, or putrefaction. They are also used to prepare the skin surface before injecting the animal. 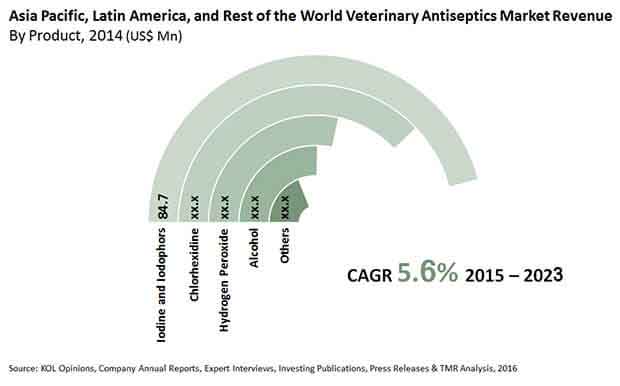 Pet Adoption Emerges as the Key Trend Fueling the Market

According to the research report published by Transparency Market Research, the opportunity in the Asia Pacific, Latin America, and Rest of the World veterinary antiseptics market will be worth US$401.6 mn by 2023 from US$243.0 mn in 2014. During the forecast period of 2015 and 2023, the market will surge at a CAGR of 5.6%, observes the lead analyst of the research report.

The steady CAGR and positively rising revenues of this market will be attributable to the emerging trend of pet adoption in several developing countries. Pet owners are gradually gaining awareness about safeguarding their pets from infections and diseases, which has reflected on the increased uptake of veterinary antiseptics in the past few years.

According to the research report, the veterinary antiseptics market in Asia Pacific with be worth US$401.6 mn by 2023 as the market expands at a steady CAGR of 5.6% between 2015 and 2022. The increasing disposable incomes in China and India are encouraging consumers to adopt pets, which is expected have a positive impact on the overall market in the coming years.

On the basis of product, the veterinary antiseptics market in Asia Pacific, Latin America, and Rest of the World is segmented into iodine and iodophors, chlorhexidine, alcohol, hydrogen peroxide, and others. Out of these, the iodine and iodophors segment is expected to grow at the fastest CAGR of 6.3% between 2015 and 2023. During this period, revenue from iodine and iodophors will rise to US$149.4 mn. The popular usage of iodine and iodophors is attributable to its mildness. Thus, it is extensively used for treating both small and large animals. For instance, the most commonly used form of iodophors is povidone-iodine as a solution or a scrub under the popular name of Betadine.

During the same period, the chlorhexidine segment is expected to rise at a CAGR of 5.5% between 2015 and 2023. This antiseptic is largely used for cats, sheep, horses, cows, poultry animals, and dogs for treating their cuts, insect stings, and abrasions. Chlorhexidine is known for improving precipitation of salivary minerals, which leads to calculus in companion animals.

Some of the key players in the market are Continental Manufacturing Chemist, Inc., Indian Immunologicals Ltd., M.B.D. Marketing (S) Pte Ltd., Bayer AG, Merck Animal Health, Merial, and Zoetis, Inc. Acquiring a talent pool by absorbing microbiologists and researchers through collaborations with academies will prove pivotal to the future of the companies.

The veterinary antiseptic market in the developing regions (Asia Pacific, Latin America, and Rest of the World) is witnessing impressive growth due to rising demand for animal food products and increasing adoption of companion animals such as cat and dogs. Furthermore, changing lifestyle in developing countries such as China and India has resulted in an increased adoption of pet animals. This is driving the animal health care market in the region. The study of the veterinary antiseptic market in these regions offers a comprehensive understanding of various antiseptic products, injuries therapies, animal welfare laws, animal statistics, marketing and branding strategies, and other core factors of the market. The study comprises a detailed analysis of the antiseptic products, and helps in understanding various drivers contributing to the market growth in real-time and in the near future. Furthermore, the study focuses on the best practices in animal care, the science behind antiseptic and healing wounds, and the currently prevalent standards of practice in the region. Moreover, the research includes an in-depth competitive analysis and a market model in terms of competitive strategy and current market share. The stakeholders of this report include manufacturers of antiseptic products, wound and injury care products, and companies involved in the distribution of various products such as spirit, alcohol and chlorhexidine and new entrants who wish to enter the market.

The veterinary antiseptic market has been extensively analyzed on the basis of product type and animal species. Based on product type, the market has been segmented into iodine and iodophors, chlorhexidine, alcohol, hydrogen peroxide, and others. The species segment comprises bovine, porcine, ovine, equine, canine, feline, and camelidae. In terms of geography, the market considered under study comprises Asia Pacific, Latin America, and Rest of the World. Each of these regions has been further studied and estimated for all the product types and major countries.

Each of the segments has been analyzed in detail for market trends, recent developments, outlook, and opportunities. The report provides the current and future market size for each segment and sub-segment for the period from 2013 to 2023 in terms of revenue in USD million, considering 2013 and 2014 as the base years. The compound annual growth rate (% CAGR) for each market segment has been provided for the forecast period from 2015 to 2023 along with the estimations of market size.

The study also offers a list of recommendations and highlights of the market for new companies willing to enter the market and for existing companies to increase their market shares. This is likely to help the companies in the decision-making process. The market overview section of the report demonstrates the market dynamics and market trends such as drivers, restraints, and opportunities that influence the current and future status of the Asia Pacific, Latin America and Rest of the World veterinary antiseptic market. The report also covers market attractiveness analysis, value chain analysis, and pricing and margin analysis in the market overview section in order to provide a thorough analysis of the overall competitive scenario in the veterinary antiseptic market.

The Veterinary Antiseptics Market in Asia Pacific, Latin America, and Rest of the World, by Product

The Veterinary Antiseptics Market in Asia Pacific, Latin America, and Rest of the World, by Species

The Veterinary Antiseptics Market in Asia Pacific, Latin America, and Rest of the World, by Geography