Transparency Market Research observes that these factors will continue to inhibit the growth of the global potato protein market for the foreseeable future. According to the report, the global market for potato proteins is expected to witness a moderate growth at 3.6% CAGR in terms of value, during the forecast period, 2017-2026. It has been estimated that by the end of 2026, more than US$ 150 Mn worth of potato protein will be consumed across the globe. 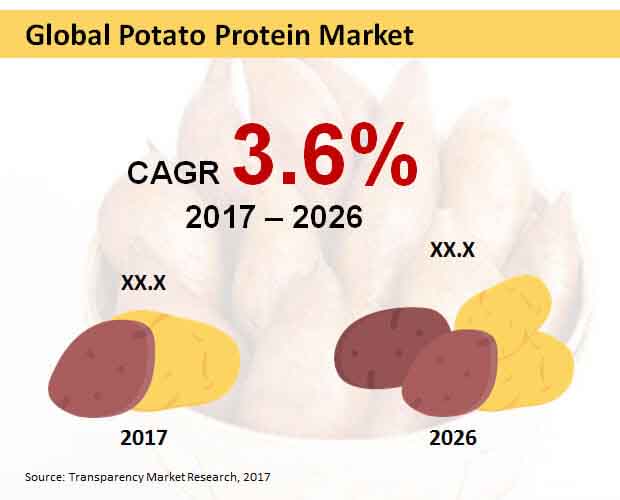 On the basis of applications, the report has observed that potato protein will be predominantly used to make animal feed in the future. Animal feed production is expected to account for more than 20% of the market value throughout the forecast period. The report also observes that potato proteins will find lucrative application in production of dairy products. Their nutritional value enables diary product manufacturers in extending the energy content of their products. In addition, low prices of potato protein make them suitable for large-scale dairy product manufacturing. Over the forecast period, diary product applications of potato protein are expected to translate a revenue growth at 4.8% CAGR.

Roquette, Solanic BV (AVEBE Group), Omega Protein Corporation, Agrana, Kerry Group plc., E. I. du Pont de Nemours and Company, Cargill, Archer Daniels Midland Company, Südstärke, KMC Ingredients, Peppes Group, AKV Langholt, Meelunie, and Emsland Group have been identified as the global leaders in production of potato protein. These companies have been extensively profiled in the report, and are expected to instrument the market’s growth through 2026. Adopting latest product techniques will be prioritized by these companies. Several potato protein market participants are also expected to work towards making the procurement of raw potatoes and ingredients more cost-effective in the near future.

Prevalent use of potato in the global food industry has served the dietary needs of generations of consumers. Food investigators have explored the nutritive value of potatoes, and these findings have been incorporated by food making companies towards development of specialized potatoes, enriched in key nutrients such as proteins. Functional properties of potato proteins are finding lucrative applications in production of functional foods. Moreover, increasing demand for protein isolates among health-conscious consumers continues to propel the uptake for potato proteins. As more consumers opt for plant-based protein products, companies partaking in the global potato protein market are extending their capacities. New production techniques are replacing the conventional methods of producing potato protein products. In addition, feeding experiments are being carried out to test the edibility and digestibility of potato proteins with distinct mix of nutrients through animal trials.

Analytical standpoint of this report justifies the present backdrop of the global potato protein market, and reveals the influences for future market growth precisely. Supply chain characteristics of potato protein at a global perspective have been detailed in the report. The forecast market growth reflects that influence of latest industry trends, while the study has also addressed the key factors driving the demand for potato proteins. From increasing demand for plant-based proteins to high profit margins associated with sales of potato protein, several factors that have shaped up the demand-side and supply-side growth of the market have been analyzed in the report.

Leading manufacturers in the global potato protein market have been identified. Evaluation of their latest and notable strategies of each market player have been studied. New production techniques have been analyzed on the basis of their cost-effectiveness. Moreover, strengths and weaknesses of the competitors have been revealed to extend the scope of competitor analysis developed in the report. From raw material procurement strategies to cost structure and distribution framework, several key aspects of the global potato protein production landscape have been premeditated in this report. Key inferences provided in this study are aimed at increasing the understanding of market players and enabling them to plan their future strategies prudently. Comprehensive Assessment of Market Players