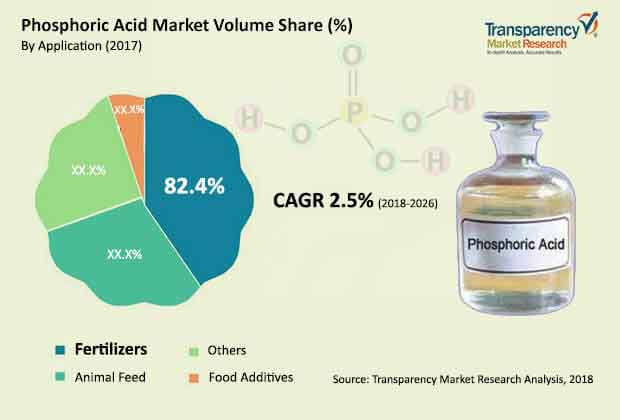 The environmental impact of phosphoric acid and phosphates in general has been investigated over the years and with the recent and relatively clear results, regulations have been imposed on the use of these chemicals. Phosphates and phosphoric acid affect water systems and pollute the water. High usage of phosphates in water bodies leads to an imbalanced water system. Phosphates provide nutrients to plants in a water body such as floating algae, which results in their abrupt growth. This decreases the supply of oxygen to animals in the water body. The entire cycle causes an imbalance, harming the human life, as humans rely on water bodies for sustenance. This cycle of pollution is a well-documented fact and is also the reason why phosphoric acid are being heavily regulated and banned in several regions across the world. Thus, the environmental impact of phosphates hampers the market for phosphoric acid.

Due to the rising demand for food, quality of crops needs to be improved and crop production needs to be increased. This is achieved by using phosphate fertilizers on crops. This, in turn, fulfills the global food demand. Market players, along with government bodies and cooperatives, are adopting various measures to improve awareness among farmers. These initiatives include educating farmers regarding the use of online portals developed specifically to provide information related to phosphate products. Detailed information is provided and frequently updated studies on availability, effectiveness, correct time, and amount of application of phosphate fertilizers are uploaded on these portals. Seminars are organized in collaboration with farmer cooperatives and government bodies to reach out to farmers with the appropriate information. Major market players have launched interactive online portals with live assistance by their regional representatives to keep farmers updated and resolve their plant-disease-related queries.

Market players, coupled with the government bodies and cooperatives, are embracing different measures to improve mindfulness among ranchers. These activities incorporate teaching ranchers with respect to the utilization of online gateways grew explicitly to give data identified with phosphate items. Definite data is given and oftentimes refreshed investigations on accessibility, viability, right time, and measure of use of phosphate composts are transferred on these entries. Classes are coordinated as a team with rancher cooperatives and government bodies to contact ranchers with the proper data. Significant market players have dispatched intelligent online entrances with live help by their territorial agents to keep ranchers refreshed and resolve their plant-infection related inquiries.

The report comprises a detailed value chain analysis, which provides a comprehensive view of the global phosphoric acid market. Porter’s five forces model for the phosphoric acid market has also been included to help understand the competition landscape of the market. The study encompasses market attractiveness analysis, wherein application segments have been benchmarked based on their market size, growth rate, and general attractiveness.

The study provides a decisive view of the global phosphoric acid market by segmenting it in terms of application and region. These segments have been analyzed based on the present and future trends. Regional segmentation includes the current and forecast demand for phosphoric acid in North America, Europe, Asia Pacific, Latin America, and Middle East & Africa. The report also covers individual application segments of the market in all regions.