Patients today live a much longer and healthier life as compared to the earlier years due to the development of various innovative and highly functional medical equipments. All of these newly developed medical equipments are the results of cutting-edge research and revolutionary technologies that have taken years to bring positive results. However, there prevails a risk of pediatric population being left behind though pediatric illnesses are relatively rare in their occurrences. Only a few of the medical inventions have been done with the needs of children in mind. With the presence of such huge untapped market, the growth of the global pediatric medical devices market is likely to observe growth in the years to come.

The growth of the global pediatric medical devices market is likely to be driven by the rising incidents of various chronic diseases amongst the children, such as Lyme disease, whooping cough, tuberculosis, pneumonia, mumps, measles, leukemia, diphtheria, chickenpox, asthma, and anemia..

Some of the pediatric medical devices are mentioned as below

According to a UNICEF press release dated November 2019, pneumonia claims the life of a child every 39 seconds on the world. Most of these deaths occurred to children under the age of two and nearly 153,000 newborns die due to pneumonia within a month of his or her birth. Such huge number of newborn deaths is likely to support growth of the global pediatric medical devices market in the years to come.

The global pediatric medical devices market was valued at US$ 21,000 Mn in 2017 and is projected to expand at a CAGR of 8.0% from 2018 to 2026. The number of pediatric patients who have succumbed to infectious diseases such as gastrointestinal and respiratory disorders has increased significantly. Early diagnosis and regular monitoring of these patients are essential to identify, treat, and control the spread of these diseases. Moreover, rise in prevalence of asthma, cystic fibrosis, and COPD propel the anesthesia & respiratory care devices segment. According to the World Health Organization, chronic respiratory diseases comprise all such medical conditions that affect the airways and other lung structures. The most common chronic respiratory diseases are asthma, chronic obstructive lung disease including chronic obstructive pulmonary disease, bronchitis, and emphysema; lung cancer and neoplasms of respiratory and intrathoracic pulmonary heart disease, and diseases of pulmonary circulation. The WHO estimates that, presently, 235 million people suffer from asthma, and approximately 90% COPD deaths occur in low and middle income countries. This in turn drives demand for better treatment and management of respiratory diseases among children. 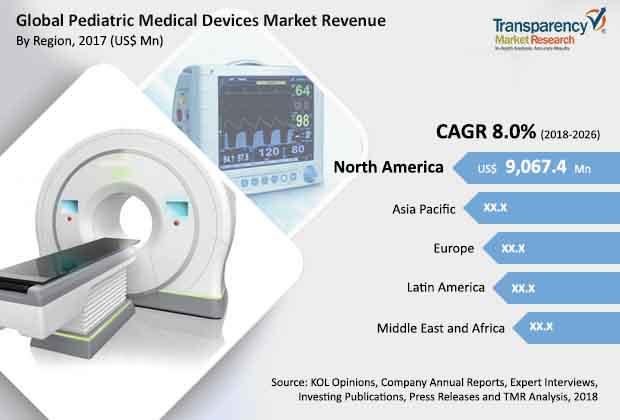 Governments are experiencing significant pressure to explore avenues to improve health of the pediatric population and simultaneously reduce the financial burden. Development of health care infrastructure in emerging economies and rise in awareness about the available treatments for pediatric health issues have led to rapid adoption of latest pediatric medical devices in regions such as Asia Pacific, the Middle East, Latin America, and emerging countries in Africa. Increased efforts by governments and health care organizations in these countries toward the prevention and efficient treatment of diseases among pediatrics has resulted in a surge in purchase of technologically advanced pediatric medical devices. Rise in prevalence of diseases and disorders such as asthma, diabetes, mental disorders, allergies, and infectious diseases among the global pediatric population and increase in awareness about these diseases and disorders among parents contribute to the growth of the global pediatric medical devices market. Rise in pediatric patient pool and increase in government efforts to create awareness about pediatric disorders and treatment present large opportunities for players operating in the market.

The global pediatric medical devices market has been segmented based on product, end-user, and region. In terms of product, the neonatal ICU devices segment held major market share in 2017 and is projected to gain market share by 2026. Anesthesia and respiratory devices have a fairly high usage, particularly among pediatric patients, due to their efficacy in treating diseases such as asthma. According to the World Health Organization (WHO), asthma is a chronic inflammatory disease that affects millions of children below the age of five years globally each year. Most of the deaths due to chronic inflammatory diseases occur primarily in developing countries.

Geographically, North America dominated the global pediatric medical devices market in 2017. The region’s dominance is attributed to rise in prevalence of cancer and respiratory diseases, increase in popularity of portable devices, and growing preference for home health care devices and services. However, the market in Asia Pacific is expected to expand at the fastest growth rate during the forecast period from 2018 to 2026. Untapped opportunities, improving health care infrastructure, increase in awareness about available diagnostic procedures and technologies, and favorable government initiatives are the major factors fueling the growth of the pediatric medical devices market in the region.

This report analyzes the current and future scenario of the global pediatric medical devices market. Growth of the global market is attributed to rise in chronic health conditions among infants and children, increase in pediatric population with cardiac and neurological defects, surge in demand for advanced diagnostic technology for accurate diagnosis of life-threatening diseases, increase in demand for 3D medical imaging equipment in pediatric radiology, initiatives by governments and favorable reimbursement scenario, and technological advancements. Moreover, unhealthy habits, rise in obese pediatric population, increase in R&D investments leading to new product launches, surge in awareness about pediatric care, economic growth in emerging markets, and technical advancement in the pediatric health care industry are expected to augment the global market during the forecast period.

The global pediatric medical devices market report comprises an elaborate executive summary, which includes a snapshot that provides information about various segments of the market. It also provides information and data analysis of the global market with respect to the segments based on product, end-user, and region. A detailed qualitative analysis of drivers and restraints of the market and opportunities has been provided in the market overview section. Additionally, the section comprises competitive matrix and company profiles with business overview to understand the competitive landscape in the market. This section of the report also provides market attractiveness analysis, by geography and market share analysis, by key players, thereby presenting a thorough analysis of the overall competitive scenario in the global market.

In terms of product, the global pediatric medical devices market has been segmented into in vitro diagnostic (IVD) devices, cardiology devices diagnostic imaging devices, anesthesia & respiratory care devices, neonatal ICU devices, monitoring devices, telemedicine, and home-use medical devices. Based on end-user, the global market has been divided into hospitals, diagnostic laboratories, ambulatory surgical centers, and others. The market size and forecast for each of these segments have been provided in terms of US$ Mn for the period from 2016 to 2026, along with respective CAGRs for the forecast period from 2018 to 2026, considering 2017 as the base year.

Geographically, the global pediatric medical devices market has been segmented into five major regions and key countries/sub-regions in the respective region: North America (the U.S. and Canada), Europe (the U.K., Germany, France, Spain, Italy, and Rest of Europe), Asia Pacific (India, China, Japan, Australia, and Rest of Asia Pacific), Latin America (Brazil, Mexico, and Rest of Latin America), and Middle East & Africa (South Africa, GCC Countries, and Rest of Middle East & Africa). The market size and forecast for each of these regions and the mentioned countries have been provided for the period from 2016 to 2026, along with their respective CAGRs for the forecast period from 2018 to 2026, considering 2017 as the base year. The research study also covers the competitive scenario in these regions.

The global pediatric medical devices market has been segmented as below: