With increasing number of workforce at home and industries operating at reduced capacities, the COVID-19 outbreak has led to a decline in electricity demand across the board. Such findings are affecting business growth of the U.S. peaking power plant market. Stakeholders are urging the U.S. Federal Energy Regulatory Commission (FERC) to issue a NOPR (Notice of Proposed Rule-making) since there has been an unprecedented drop in electricity consumption. This is forcing grid operators to revise forecasts and expectations of grid needs.

On the other hand, the residential sector in India is observing a spurt in power demand. The second wave of the coronavirus pandemic in India is creating incremental opportunities for companies in the India peaking power plant market, since healthcare facilities require uninterrupted electricity supply. However, this is predicted to affect the energy demand in India’s commercial and industrial activities. 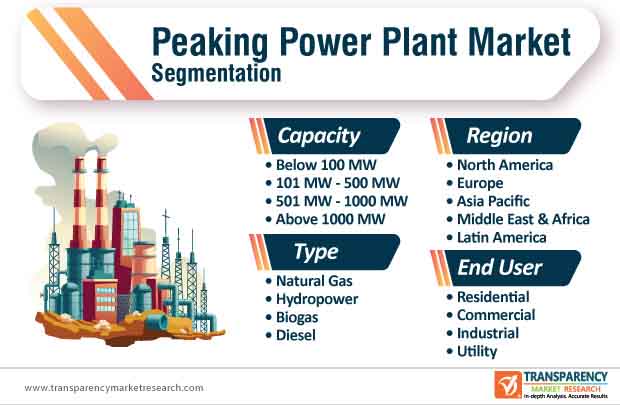 The global peaking power plant market is expected to surpass valuation of US$ 1.2 Trn by the end of 2031. However, differences in policy-making are affecting business activities for stakeholders. For instance, the wind energy capacity of Texas is better than most countries, but the Electric Reliability Council of Texas (ERCOT) lacks the ability to introduce explicit policies that support energy storage. Thus, companies in Texas are taking cues from other states and companies including the Florida Power & Light, which is increasing efforts to strengthen its storage for renewable energy and operate a 409-megawatt battery storage system by 2021.

Companies in the peaking power plant market are unlocking growth opportunities in India. They are striving to move beyond the 501 MW - 1000 MW capacity and deliver as much as 2.3 gigawatts capacity, as stated by the Central Electricity Authority. Four National Thermal Power Corporation (NTPC) Limited plants - an Indian Government electricity board, is planning to test a project to operate its underutilized natural gas-fired power generators capable of switching quickly during peak demand. Other stakeholders are taking cues from such developments to even out supply fluctuations from the large amount of renewable energy.

Favorable government policies are grabbing the attention of companies in the India peaking power plant market. India shares an ambitious goal of installing 175 gigawatts of renewable energy by 2022.

Since hydropower is not a viable option for landlocked countries, countries such as Pakistan and Colombia hold promising potentials for growth of hydropower in the peaking power plant market. On the other hand, countries including Thailand are proposing more base power plants whilst Indonesia is proposing large capacity 240MW gas engines. An increasing number of countries is relying on coal power generation and is a threat to the peaking power plant market growth. The awareness about increased environmental burden due to coal is helping stakeholders to gravitate toward renewable energy alternatives.

India and China are increasing their coal base whilst deploying high amount of renewables. Thus, analysts at the Transparency Market Research (TMR) opine that peakers will play a significant role in both the countries in the upcoming decade.

The peaking power plant market is undergoing an important change with a shift from fossil fuel peaker plants to clean renewable and battery storage technologies. Thus, stakeholders need to adapt as per changing consumer needs and government regulations to stay relevant and gain a competitive edge over other market players. Clean Energy Group - a U.S.-based non-profit organization working to advance in clean energy, is increasing efforts to systematically demonstrate with analysis and technology assessments how communities could use clean energy alternatives with battery storage to meet high electricity demands.

Stakeholders in the peaking power plant market are setting their collaboration wheels in motion to enable local health and wealth benefits. They are increasing focus to create awareness about the environmental and economic harms caused by peaker plants that are soon going to be replaced with renewables and battery storage technologies. 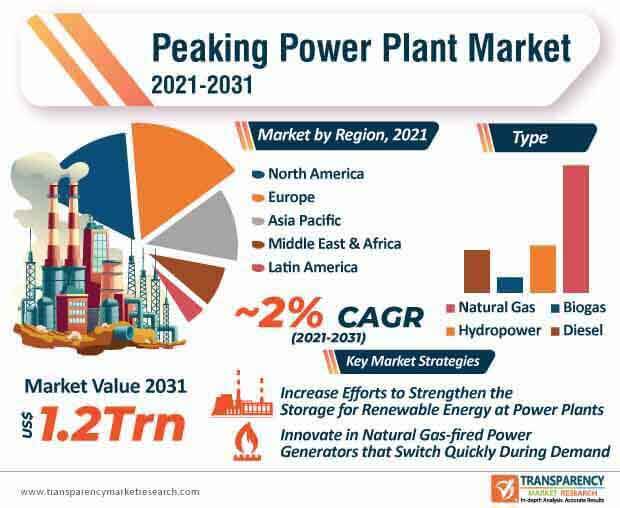 Looking for Regional Analysis or Competitive Landscape in Peaking Power Plant Market for Performance OEM , ask for a customized report

Industrial and commercial activities are pulling down the demand for electricity while countries suffering from increasing COVID-19 cases are demanding peaker plants. The peaking power plant market is slated to clock a sluggish CAGR of ~2% during the assessment period. This is evident since states such as Nevada are notorious for releasing highest levels of carbon dioxide due to several natural gas-fired peaker plant installations. Hence, companies are increasing their focus in solar and energy storage infrastructure to overcome drawbacks of conventional peaker installations. Companies should adapt to renewables and battery storage technologies to stay relevant in the evolving market landscape. They should increase efforts to replace aging peaker plants with renewable energy installations to ensure a reliable and cost-efficient supply of electricity.

Increase in Applications of Peaking Power Plant in Industrial Sector

This study covers detailed segmentation of the global peaking power plant market, along with key information and a competition outlook. The report mentions company profiles of players that are currently dominating the global peaking power plant market, wherein various development, expansion, and winning strategies practiced by these players have been presented in detail.

The report provides detailed information about the global peaking power plant market on the basis of comprehensive research on various factors that are playing a key role in accelerating the growth of the market. Information mentioned in the report answers path-breaking questions for companies that are currently operating in the global market and are looking for innovative methods to create a unique benchmark in the global market so as to help them design successful strategies and make target-driven decisions.

The research methodology adopted by analysts for compiling the report on the global peaking power plant market is based on detailed primary as well as secondary research. With the help of in-depth insights of the market-affiliated information obtained and legitimated by market-admissible resources, analysts have offered riveting observations and authentic forecasts of the global peaking power plant market.