Hypothermia is a major cause of death in severely wounded patients. Rewarming is a major challenge, particularly for those who need operative or angiographic intervention. Patient warming is more than providing relief to the patients. Patient warming devices help patients to tolerate the unintended loss of body heat by helping them achieve normal body temperature or normothermia, leading to faster recovery. Patient warming devices are primarily used in health care settings by physicians and nursing staff for better care of the patients during surgeries and patient transfer, severely injured or diseased patients, anesthesia treated patients, and in acute care settings.

The increase in the number of surgical procedures, rise in the prevalence of cardiovascular and oncology conditions, growing geriatric population and various other factors has facilitated the growth of the market. Additionally, the introduction of technologically advanced products and increasing the awareness can create large number of opportunities for rapid growth of the market. 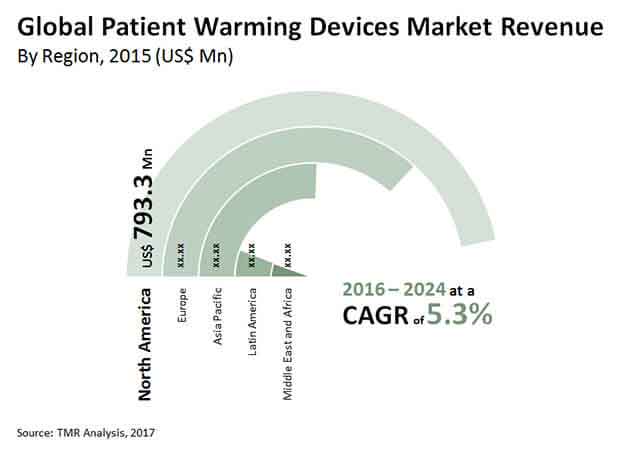 Use of Patient Warming Devices to Remain High in Perioperative Care

In addition, large geriatric population in the developed economies of North America, Europe is likely to support further growth of this market in these regions. Asia Pacific is anticipated to witness the fastest CAGR during the forecast period due to high prevalence cardiovascular and other severe illnesses/disorders, increase in the number of surgical procedures in several emerging economies, rise in geriatric population in few countries such as Japan and South Korea, and growing investments by market players.

The growing prevalence of oncology and cardiovascular disorders are expected to aid in expansion of the global patient warming devices market growth. Rewarming is a significant test, especially for the individuals who need employable or angiographic intercession. Patient warming is more than giving alleviation to the patients. Patient warming devices assist patients with enduring the unintended loss of body heat by assisting them with accomplishing ordinary internal heat level or normothermia, prompting quicker recuperation. Patient warming devices are essentially utilized in medical care settings by doctors and nursing staff for better consideration of the patients during medical procedures and patient exchange, seriously harmed or infected patients, sedation treated patients, and in intense consideration settings.

A significant factor which is relied upon to fuel the interest for patient warming devices is the increasing pace of untimely births just as the developing number of children. An increment in the quantity of geriatric populace who are more defenseless against different ongoing problems will likewise be a factor which is answerable for the development of this market. An expanding frequency of musculoskeletal problems by virtue of inactive way of life and extended periods spent in workplaces will likewise establish a positive climate for the development of this market.

The increment in the quantity of surgeries, ascend in the commonness of cardiovascular and oncology conditions, developing geriatric populace and different variables has encouraged the development of the market. Moreover, the presentation of innovatively progressed items and expanding the mindfulness can set out huge number of open doors for fast development of the market.

The expanded frequency of cardiovascular and malignant growth sicknesses has roused the solid interest for warming and refrigerating gear. In cases of disease, a fall in internal heat level prompts the malignant growth cells duplicating in the body of the patient. Patient warming frameworks and radiation treatment and chemotherapy are utilized to battle this issue. Besides, an expanded rate of cardiovascular failures and strokes is additionally seen as a significant driver for market development. In these cases, the body ought to be similarly cooler to raise the endurance rate and permit an ordinary working of the cerebrum. In the light of new temperature control innovations, for example, ground cushions, covers and head covers, mechanical advances have likewise expected to support market interest.

This report on the patient warming devices market studies the current as well as future prospects of the market globally. The stakeholders of this report include companies and intermediaries engaged in the manufacture and commercialization of various patient warming devices such as surface warming devices as well as new entrants planning to enter this market. This report comprises an elaborate executive summary along with a market snapshot providing overall information of various segments and sub-segments considered in the scope of the study. This section also provides the overall information and data analysis of the global market with respect to the leading market segments based on major products, applications and geographies.

The global patient warming devices market has been studied based on major product/device segments, application segments, and their regional as well as national markets. Based on product type, the global market has been categorized into three major segments: surface warming systems, intravascular warming systems, and patient warming accessories. Based on applications, the market has been categorized into four major segments: acute care, perioperative care, new born care, and others. Based on end user, the market has been categorized into four major segments: hospitals, clinics, nursing facilities and others. The market for these segments has been extensively analyzed based on their utility, effectiveness, sales, and geographic presence. Market revenue in terms of US$ Mn for the period from 2014 to 2024 along with the compound annual growth rate (CAGR %) from 2016 to 2024 are provided for all segments, considering 2015 as the base year.

The market overview section of the report explores the market dynamics such as drivers, restraints, and opportunities that currently have a strong impact on the patient warming devices market and could influence the market in the near future. Market attractiveness analysis has been provided in the market overview section in order to explain the intensity of competition in the market across different geographies. Porter’s five forces analysis is also provided in this section to understand the market considering the different parameters that have an impact on the sustainability of the companies operating in the market. The competitive scenario among different market players is evaluated through market share analysis in the competitive landscape section of the report. All these factors would help market players to take strategic decisions in order to strengthen their positions and expand their shares in the global market.

Geographically, the global market has been segmented into five regions: North America, Europe, Asia Pacific, Latin America, and Middle East & Africa (MEA). Each regional market for patient warming devices has been further categorized into major national markets such as the U.S, Canada, Germany, France, the U.K., Japan, China, India and Brazil. Market revenue in terms of USD million for the period from 2014 to 2024 along with CAGR % from 2016 to 2024 are provided for all the regions and nations considering 2015 as the base year.

The global patient warming devices market is segmented as follows: