The optical sensor market is charting an impressive growth, catalyzed by the quest of numerous end-use industries for a future-benign revolution. According to a latest study published by Transparency Market Research (TMR), the optical sensor market will record a value tantamount to ~US$ 1.4 Bn in 2019, and will advance at a CAGR of ~11% during 2019-2027. The need for high Internet speed to facilitate seamless operations of IoT devices is projected to exert a strong influence on the landscape.

Since the 'price' of optical sensors is a key competitive parameter, local players, especially those based in developing countries, tend to penetrate in developed countries and distinguish themselves by offering effective optical sensors - in terms of both, price and operations - which puts a price-reduction pressure on established players. However, the threat of counterfeit optical sensors is leading to shifting interest towards substitute sensors, with photoelectric sensors leading the pack. 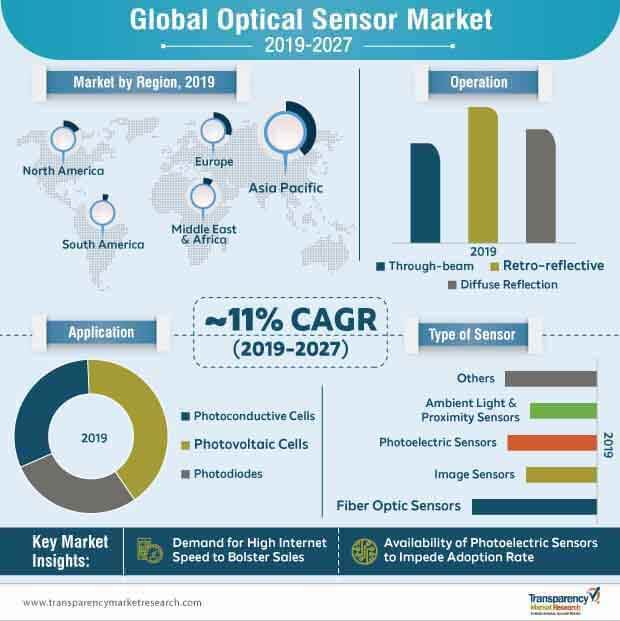 Among the early adopters of optical sensors, gains from consumer electronics are likely to remain lucrative, owing to the massive uptake in the demand for smartphones, smart watches, tablets, and voice assistant devices, among others. However, the penetration of biometrics technology to underpin security and tracking features is gaining exponential momentum, which can unlock market consolidation opportunities for market players. The future of the optical sensor market will gain a new dimension, as autonomy will propel the growth of the automotive industry, and optical sensors will make effective communication media to abate road-mishap instances.

Traditional requirements ascending from end-use industries were limited to the use of sensors for gauging variables such as vibration, acoustic pressure, strain, acceleration, and rotation, which deemed intrinsic optical sensors as ideal components. However, since contemporary and futuristic electronic components shoulder the responsibility of operating numerous systems with procured intelligence, without human intervention, market players extend the capacities of optical sensors by improving their potency to measure temperature, flow, liquid level, pressure, etc., and transmit data to the designated module. 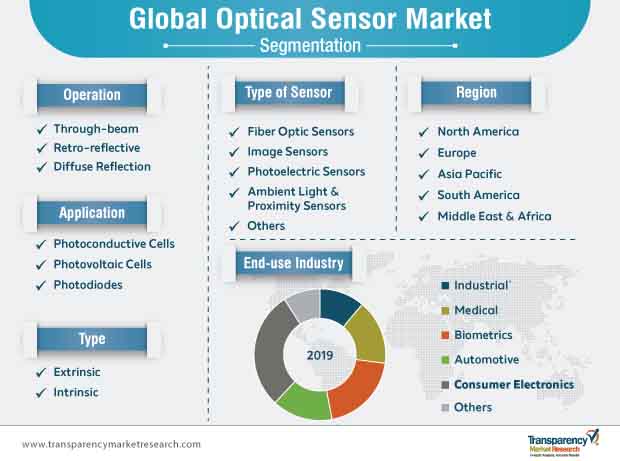 Stuck in a neck-to-neck competition with other brands? Request a custom report on “Optical Sensor Market”

Authors of the report foresee an impressive growth of the optical sensor market, and are of the opinion that, a scramble towards addressing biometric applications holds remunerative opportunities for market players. With alternatives scoring over optical sensors, a good pricing strategy can help market players upturn sales opportunities in the industry. Discrete semiconductor manufacturers are betting on innovation capabilities to introduce new products in the market, and stay relevant. For instance, Vishay Intertechnology, Inc. announced the launch of an ambient light sensor for novel applications such as smart watches and sports bands.

Given the evolutionary nature of the optical sensor market, established players resort to research & development activities to stay abreast with novel trends, which leads to high capital requirements. Huge initial expenditures create an entry barrier for new players, and despite making headway in the industry, strategic partnerships established by market majors are likely to undermine the opportunities for new entrants in this landscape.

Key manufacturers of optical sensors, such as Vishay Intertechnology and Panasonic Corporation, are strengthening their overseas sales structure by increasing their production capacities. Another key development in the global optical sensor market is as follows:

The global study intends to provide rare and distinguished insights regarding the key trends observed in the optical sensor market during the forecast period. The information presented in this exclusive study will aid stakeholders in consolidating their market position by devising sustainable growth strategies.

This comprehensive business study comprises a microscopic view of the evolution of the optical sensor market and the changing dynamics that exert a strong influence on the advancement of the landscape. This comprehensive business study offers crucial insights pertaining to the impactful drivers, threats, opportunities, and trends present in the optical sensor market, to equip stakeholders with recent developments and market shifts.

This exclusive guide assesses and includes Porter’s Five Forces to provide significant growth strategies present in the optical sensor during the forecast period. The business study provides crucial information regarding the competition present in the optical sensor market by identifying the key competitors. The comprehensive guide also consists of key strategies employed by market majors, along with their notable developments and key financials.

The exclusive report on the optical sensor market offers valuable insights to stakeholders functioning in the landscape. Analysts of TMR have taken proper care while preparing the business study, to cover all the key aspects concerning the growth of the landscape for stakeholders in the optical sensor market. Some of the key questions answered in this global study include:

The comprehensive research carried out by Transparency Market Research (TMR) analysts comprises a robust methodology, devised in order to assess the crucial insights pertaining to the growth of the optical sensor during the forecast period. Discussions with key opinion leaders, vendors, industry experts, and market majors were carried out to conduct thorough primary research. In addition, our analysts also referred to marketing collaterals, company websites, financial reports, and government statistics to cull more valuable insights of the optical sensor market.