Travel bans, supply chain pressure, and deferred maintenance of offshore wind turbines are among key challenges faced by wind farm owners during the ongoing COVID-19 pandemic. Lack of manpower to fix the breakdown of wind farms is another challenge that companies in the offshore wind turbines market need to tackle. Moreover, factory shutdowns worldwide have affected the uptake of renewable energy. This led to difficulties in adhering to deadlines for building new projects.

Ongoing travel restrictions are causing a major problem in maintaining optimum performance of offshore wind farms. This issue is quite prominent in the European Union. On the other hand, other countries have been fortunate due to availability of enough domestic service engineers. As such, there is a demand for overseas-based specialists to tackle issues for large O&M (Operation & Maintenance) problems of wind farms. 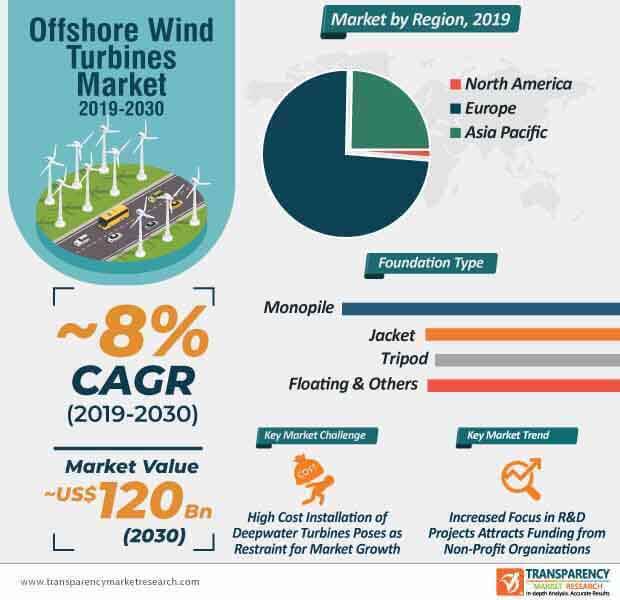 Manufacturers are adapting their production practices according to popular reference turbines before building prototypes. They are tapping into opportunities in new wind resources to make floating wind turbines more cost competitive. Floating wind turbines are anticipated to acquire prominence in Northeastern United States and Pacific regions. 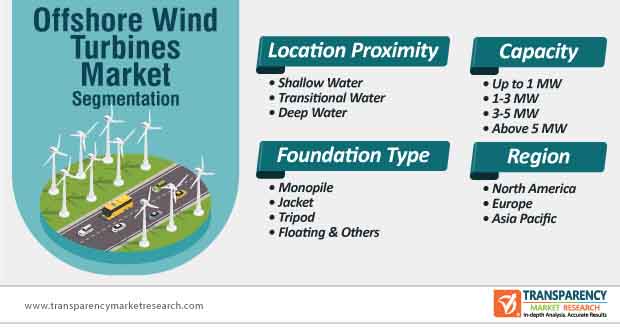 The U.K. Government has joined the race of completely eliminating greenhouse emissions by the end of 2050. However, there is a need for favorable regulatory policies in order to meet this end goal. Hence, companies in the offshore wind turbines market are exploring untapped business opportunities in Europe to expand the horizons of their revenue streams. As such, the offshore wind farm has become an integral part of the renewable energy uptake in the past couple of years. Moreover, daily intermittency and public resistance to onshore development of wind turbines, owing to inadequate land usage are some of the key factors that are favoring the demand for offshore wind turbines.

Lucrative business opportunities in the U.S. offshore wind turbines market are contributing toward exponential volume growth, which is predicted to reach ~65,000 MW globally by 2030. Moreover, the U.S. National Offshore Wind Research and Development Consortium has announced to sanction US$ 10.3 Mn to 12 shortlisted projects focused toward the advancement of offshore wind R&D. It is being observed that non-profit organizations are collaborating with public and privately owned companies to enhance the offshore wind supply chain and increase research to assess the impact of offshore wind on the electric grid system.

Companies in the offshore wind turbines market are taking cues from the digital twin model to optimize offshore wind performance in other coastline communities across the U.S. apart from California.

Stuck in a neck-to-neck competition with other brands? Request a custom report on Offshore Wind Turbines Market

Longer downtimes of wind turbines are surfacing due to the lack of availability in O&M engineers. Since the installation of deepwater substructures is potentially expensive and challenging due to harsh conditions, companies in the offshore wind turbines market should explore opportunities in the digital twin model technology to overcome limitations. As such, companies are increasing focus in condition-based maintenance to avail funding from non-profit organizations. Scientific collaborations between U.S. companies are paving the way for high-capacity electricity generation among coastal communities of California and other states. Inadequate land usage of onshore turbines has led to offshore turbines emerge as an attractive alternative in Europe.

This study covers detailed segmentation of the global offshore wind turbines market, along with key information and a competition outlook. The report mentions company profiles of players that are currently dominating the global offshore wind turbines market, wherein various developments, expansions, and winning strategies practiced by these players have been presented in detail.

The report provides detailed information about the global offshore wind turbines market on the basis of comprehensive research on various factors that are playing a key role in accelerating growth of the global market. Information mentioned in the report answers path-breaking questions for companies that are currently operating in the global market and are looking for innovative methods to create a unique benchmark in the market so as to help them design successful strategies and make target-driven decisions.

The research methodology adopted by analysts for compiling the report on the global offshore wind turbines market is based on detailed primary as well as secondary research. With the help of in-depth insights of the market-affiliated information obtained and legitimated by market-admissible resources, analysts have offered riveting observations and authentic forecasts of the global offshore wind turbines market.