R&D Activities to Accelerate Discovery of New Treatments and Drugs 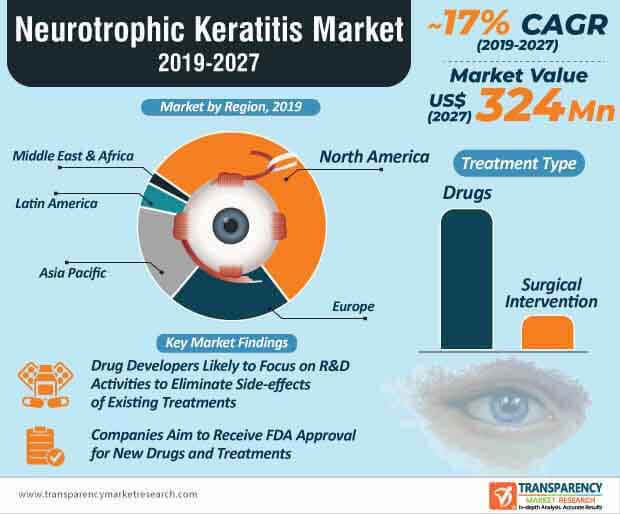 Receiving approval from the FDA is tipped to be one of the most groundbreaking developments in the current neurotrophic keratitis market, and likely to pave the way for new drugs and treatments during the forecast period. While the FDA approval marks the beginning of new drug development activities in the neurotrophic keratitis market, drug developers are also expected to invest resources to curb the adverse reactions of these drugs.

In the past few years, research and development activities have gained considerable amount of traction in the neurotrophic keratitis market. Clinical trials on different animals have revealed that corneal denervation minimizes corneo limbal stem cell function and number– a factor that could cause the development of epithelial ulcers experienced by patients suffering from neurotrophic keratitis. At present, some of the most notable treatments offered to treat neurotrophic keratitis include autologous serum eye drops, tarsorrhaphy, gold weight placement, punctual closure, and bandage contact lenses. The recombinant human nerve growth factors eye drops sub-segment segment of the drugs segment is projected to gain significant popularity in the second half of the forecast period and emerge as one of the most vital treatment types due to the growing evidence supporting the efficacy of the treatment. Some of the key parameters that are used to assess the efficacy of treatment include corneal healing, corneal sensitivity, and duration of corneal healing, among others. 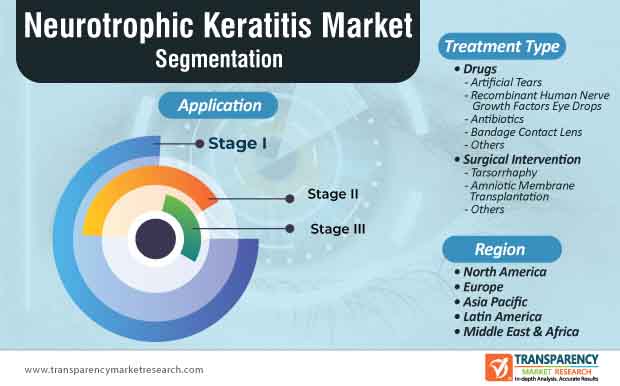 The global neurotrophic keratitis market is expected to grow at a staggering CAGR of ~17% during the forecast period. The impressive market growth will be driven by a range of factors, including rise in the number of neurotrophic keratitis cases across the world and surge in co-morbidities and risk factors. Moreover, research and development activities for the development of new treatment and drugs will continue to define the course of the market for neurotrophic keratitis during the forecast period. Drug developers and key participants in the current market landscape will eagerly anticipate obtaining the FDA approval for their drugs and treatment. While North America and Europe are expected to lead in terms of market share and value, Asia Pacific region will continue to present lucrative opportunities for market players.

Increase in Reported Cases of Keratitis: A Key Driver

Surge in Investments in Research and Clinical Study, and Product Approvals and Launches to Augment Global Market

The report includes an elaborate executive summary, along with a snapshot of the growth behavior of various segments included in the scope of the study. Moreover, the report sheds light on changing competitive dynamics in the global neurotrophic keratitis market. These indices serve as valuable tools for existing players in the neurotrophic keratitis market as well as for entities interested in entering the global market.