The healthcare industry is primarily driven by constant research experiments, and the nasal polyps treatment market is no exception, as it is evolving rapidly with the unique outcomes of these studies to improve the effectiveness of therapies. Extensive studies on nasal polyps are leading to new treatment opportunities for health conditions such as asthma, sinusitis, allergies, and more. These studies are laying the foundation for understanding the causes of developing nasal polyps, and introducing more effective treatments in this landscape.

Recently, NIAID (National Institute of Allergy and Infectious Diseases) initiated a study to understand the causes of, and ultimately develop treatments for nasal polyps. The study found that, exposure of the epithelial cells to Dupilumab, a drug used to treat patients suffering from asthma and allergic inflammation, can influence shifts in gene expression and cell behavior. However, the study also found that, the same impact was not completely observed on several polyp-associated genes, suggesting the need for innovation in nasal polyps treatments that can also be effective on other polyps-related diseases.

In terms of scope for the nasal polyps treatment market, the growth indicator is projected to show an immense rise in the coming years. The market is currently valued at ~US$ 3.9 billion, and is likely to reach ~US$ 4 billion by 2019 end. An increasing number of ongoing studies is expected to drive the rising tide of innovation in this landscape, and the nasal polyps treatment market is expected to witness impressive growth in the coming decade. 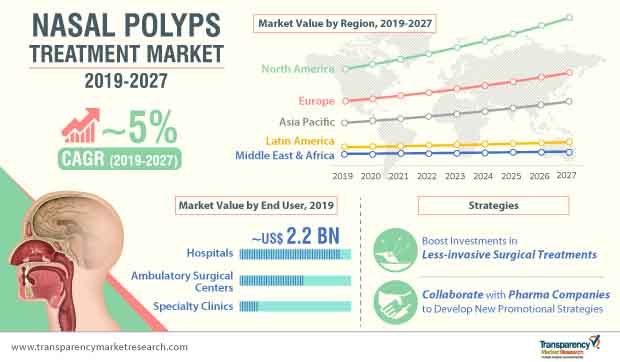 Patients’ preferences, shifting away from invasive treatments to non-invasive treatments, are having a significant impact on the emerging trends in the nasal polyps treatment market. Though the market is predominantly subjugated by pharmacological therapies such as corticosteroids, antibiotics, leukotriene inhibitors, hospitals and specialty clinics are also aiming to offer minimally-invasive surgical treatments that can cure, not only nasal polyps, but also various other health complications caused due to nasal polyps.

Functional endoscopic sinus surgery (FESS)—a minimally-invasive surgical treatment for nasal polyps—is emerging as one of the most favored nasal polyps treatments by patients as well as medical professionals. Its adoption over invasive surgical treatments such as polypectomy surgery of nasal polyps, is mainly attributed to its minimally-invasive nature that allows surgeons to directly visualize the critical areas of the nasal passage, which signifies more comfort and efficiency for both, patients and medical professionals.

Though the rising pervasiveness of asthma, nasal polys, and sinusitis has led to an increase in the efforts for the development of novel, non-invasive therapies, many nasal polyps treatments are challenged by bygone therapies such as systemic or oral corticosteroids and intranasal sprays.  Stakeholders are focusing on their novel therapies and treatments in the pipeline that can prove more effective and efficient than the ones that are already popular in the market. For instance, GlaxoSmithKline – a British multinational pharmaceutical company – announced that the European Commission has approved Nucala (mepolizumab), a targeted monoclonal antibody for the treatment of various health conditions, and is in the pipeline for further investigation for the treatment of nasal polyposis.

Although the number of stakeholders entering the nasal polyps treatment market is increasing rapidly, resistances such as inefficacy of pharmacological therapies, high cost of treatment, and complications associated with sinus surgeries are expected to slow down the growth of the nasal polyps treatment market in the coming years. These restraints are a result of common fears pertaining to steroid therapy, and the high risk of side effects such as weight gain, loss of bone mineral density, and cataract formation in the eyes.

In addition, some of the complications subject to sinus surgeries are excessive bleeding, cerebrospinal fluid leak, visual disturbances, postoperative scarring, and inflammation. Also the expensive procedure associated with functional endoscopic sinus surgery (FESS) as compared to other low-cost alternatives such as courses of intranasal sprays, and the recurrence of diseases post-surgery, are hindering the growth prospects of surgical treatments in the global nasal polyps treatment market.

However, key competitors are strategically tackling these issues by broadening their product portfolios for nasal polyps therapies, and introducing innovative treatments that are cost-efficient as well as more effective, to secure their position as leading players in the nasal polyps treatment market. For example, in September 2018, Novartis International AG – a leading a Swiss multinational pharmaceutical company – announced that it has received an approval from the U.S Food and Drug Administration (FDA) for 75 mg/0.5 mL and 150 mg/1 mL single-dose prefilled syringes (PFS), which are used as an add-on formulation for both, chronic idiopathic urticaria (CIU) and allergic asthma indications with its new product – Xolair (Omalizumab).

Authors of this report anticipate a favorable growth landscape for the nasal polyps treatment market over the forecast period of 2019–2027. The market is projected to expand its boundaries in North America, Asia Pacific, and Europe, with ongoing research directed towards introducing efficient treatments for nasal polyps, as well as other respiratory diseases triggered by the condition. The adoption of minimally-invasive surgical treatments is expected to increase among healthcare organizations; ambulatory surgical centers are projected to headline the winning race in the competitive landscape.

Functional endoscopic sinus surgery (FESS) and other less-invasive surgeries are gaining traction among consumers as well as manufacturers. However common fears and stigma attached to steroid therapies, low-cost alternatives, short-term solutions, and recurrence of diseases post-surgery are some of the hindrances that are affecting the nasal polyps treatment market.

To deal with these challenges, market players must focus on prioritizing investments toward research & development to diversify their range of nasal polyps treatments. In addition, improving awareness about the efficacy of their products among end users will become inevitable, and collaborating with key players to co-promote novel treatments will help them improve their sales performance in this landscape.

​These companies have diverse portfolios of nasal polyps treatments along with a strong presence across the globe.

Key indicators of market growth, which include value chain as well as supply chain analysis, and Compound Annual Growth Rate (CAGR), are elucidated in TMR’s study in a comprehensive manner. This data can help readers interpret the quantitative growth aspects of the nasal polyps treatment market during the forecast period.

These primary and secondary resources provided exclusive information during the interviews, which serves as a validation from nasal polyps treatment industry leaders. Access to an extensive internal repository and external proprietary databases allows for this report to address specific details and questions about the nasal polyps treatment market with accuracy. The study also uses a top-down approach to assess the numbers for each segment, and a bottom-up approach to counter-validate them. This has helped in making TMR’s estimates on the future prospects of the nasal polyps treatment market more reliable and accurate.