Multiple sclerosis is classified as a chronic, autoimmune, and inflammatory disease of the central nervous system, which affects the communication between different parts of the body and the brain. According to the National Multiple Sclerosis Society, over 1 million individuals have multiple sclerosis in the U.S. alone, and around 2.3 million people worldwide. These numbers continue to grow each year, which in turn makes it imperative to discover multiple sclerosis drugs with improved effectiveness and minimum side effects. Government and non-government entities in developed and developing regions are stepping up their efforts toward spreading awareness related to multiple sclerosis and are allocating substantial funds for research and development of new drugs. 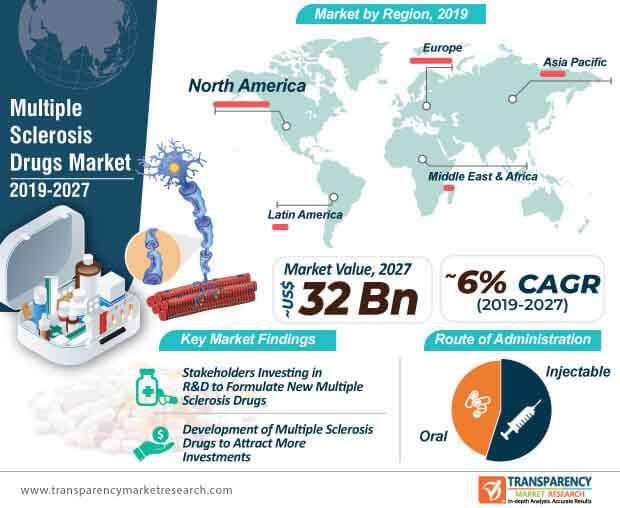 In 2017, the Food and Drug Administration (FDA) gave the approval for Ocrevus ™ (ocrelizumab), a newly developed medication that has shown promising results in slowing down the progression of multiple sclerosis, and is also one of the first drugs to receive the approval for the treatment of primary-progressive multiple sclerosis. Clinical trials revealed that patients who were given doses of ocrelizumab exhibited fewer brain lesions and a significantly lower relapse rate. Furthermore, this drug showed greater efficacy in minimizing the annual relapse rate and a number of lesions that could be seen on MRI scans than interferon beta 1a (one of the most extensively used drugs to treat multiple sclerosis).

Although there is no known cure for multiple sclerosis, the adoption of new medications to slow down the progression of multiple sclerosis and manage symptoms is on the rise. In the current scenario, research and development is playing a key role in the development of new treatments. Traditionally, disease-modifying therapies (DMTs) are the main type of medication used to treat multiple sclerosis. Players operating in the multiple sclerosis drugs market are focusing their efforts on gaining approval from the FDA for their newly developed drugs. 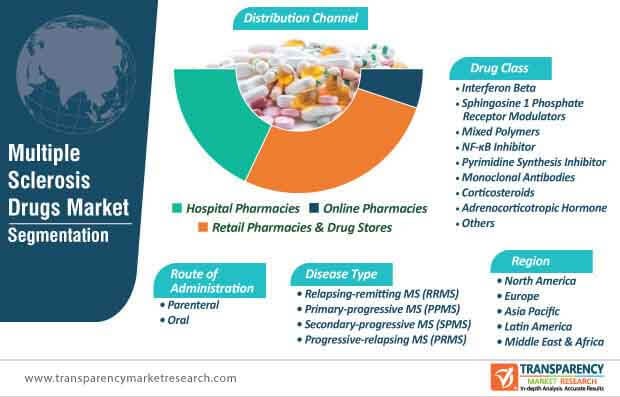 The report includes an elaborate executive summary, along with a snapshot of the growth behavior of various segments in the scope of the study. Moreover, the report sheds light on the changing competitive dynamics in the multiple sclerosis drugs market. These indices serve as valuable tools for existing market players as well as for entities interested in participating in the multiple sclerosis drugs market.

The comprehensive report on the multiple sclerosis drugs market begins with an overview of the market, followed by the scope and objectives of this study. Following this, the report provides detailed explanation of the objectives behind this study and healthcare compliances laid down by accredited agencies in the purview of line of treatment of multiple sclerosis.

For reading comprehensibility, the report has been compiled in a chapter-wise layout, with each section further divided into small sections. The entire report comprises an exhaustive collection of graphs and tables that are appropriately interspersed in the entire compilation. Pictorial representation of actual and projected values of key segments is visually appealing to readers. This also allows comparison of the market shares of key segments in the past and at the end of the forecast period.

The report analyzes the multiple sclerosis drugs market, in terms of drug class, disease type, route of administration, distribution channel, and region. Key segments under each criteria have been studied at length, and the market share for each of these at the end of 2027 has been provided. Such valuable insights enable market stakeholders in making informed business decisions for investment in the multiple sclerosis drugs market.