Lately, growing prevalence of meningococcal meningitis has emerged as public health concerns. Although effective and cost-effective treatment options are available across the globe, the disease has taken toll on several lives. Further, its induction in children below 5 years of age has been leading to long-term neurological disorders in young children and infants.

Accounting the predominant ill-effects of the meningococcal meningitis on young population, key companies operating in the meningococcal vaccine landscape such as GlaxoSmithKline is focusing on development of the medicine to cater the requirement of population and control the contraction rate of the disease. 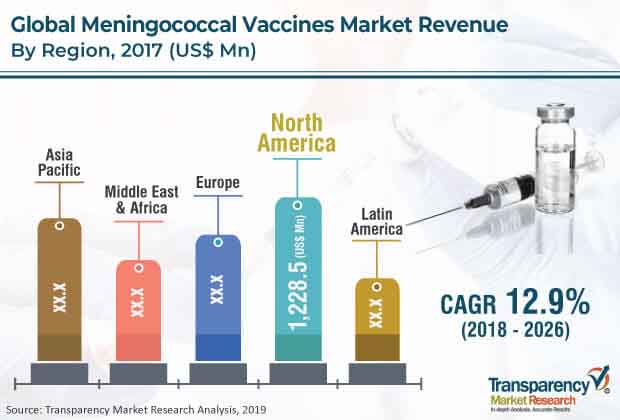 The vaccine market is witnessing favorable public-private alliances to support the development of vaccines at low cost and to curb the medical emergency status of the disease.

As per a report published by Transparency Market Research, the global meningococcal vaccines market is anticipated to witness expansion at a lucrative CAGR of 12.9% in the forecast period (2018-2026). In 2017, the market size was approximately equivalent to US $ 3.3 bn. As per the CAGR estimation given by market analyst, the market value is projected to reach approximately equal to US $ 9.9 bn by the end of 2026.

Rising awareness regarding the vaccines due to awareness campaigns and education has resulted in growth in demand rate. The campaigns and awareness programs are particularly being driven by vaccine manufacturing companies, government bodies, and non-profit organizations. Large number of people are getting immunized against bacterial meningitis.

This is one of the prominent factors driving the global meningococcal vaccine market.

Further, government interventions, such as approval of legislations to enforce immunization regulations for school children up to a particular age is projected to fuel the market growth. Besides, government bodies are introducing strict regulation for sub-Saharan travelers and Hajj pilgrims are also anticipated to contribute to the global meningococcal vaccine market. The regulations have resulted in increase in demand for these vaccines from non-profit organizations.

On the other hand, in developing countries parents of young children and infants are still unaware of significance of the disease pathogenesis of meningococcal meningitis. Hence, they are deprived of meningococcal vaccination program initiated by government bodies.

This, in turn, has resulted in low adoption rate of meningococcal vaccines, specifically among toddlers and children.

Referring the recent statistics, among 5 parents, only 1 parent is aware of most common way in which children contracts meningococcal disease. The ratio accounts for 21% of the population. Further, half of the parents are unaware of the fact that there are different types of meningococcal bacteria strains. These bacterial strains may cause meningococcal meningitis.

Moreover, significant number of parents have no idea regarding specific vaccines included in the immunization schedule as defined by the government body in the respective country.

The awareness gap is one of the major factor leading to downturn of the growth trajectory of the meningococcal vaccines market.  As a result, revenue growth is also negatively impacted.

North America market holds prominent position in the global meningococcal vaccine market, in terms of revenue. Europe and North America have been witnessing significant reduction in number of the meningitis cases. Owing to rising awareness regarding the immunization therapy against meningitis and growing intervention by government bodies in legislations have resulted in controlling the disease in the region. In addition, awareness campaigns and immunizations programs are favoring growth of the meningococcal vaccine market.

As per a report published by the U.S. Centers for Disease Control and Prevention (CDC), nearly 1,000 t0 2,600 people are diagnosed with meningococcal disease in the U.S. annually. Meanwhile, 1,000 cases per 100, 000 population is found to contracted with the diseases every year.

On the other hand, Asia Pacific regional market is estimated to scale at a significant rate during the forecast period. Recurrence of meningococcal disease outbreaks in recent years, growing focus on preventive measures against the disease, and growing population in the region are, conjointly, driving the regional meningococcal vaccine market.

To mark their presence in the global market, companies are undertaking several organic and in-organic growth strategies. Merges and acquisitions, strategic alliances between companies and governing bodies, innovation in the existing product, diversification of product portfolio may result in growth of these companies in coming years.

This report analyzes the current and future scenario of the global meningococcal vaccines market. Advancements in healthcare, increase in awareness and education through various non-profit organizations, and a rise in patient awareness and health care expenditure are key factors that are projected to drive the global market during the forecast period.

The global meningococcal vaccines market report comprises an elaborate executive summary, which includes a snapshot that provides information about various segments of the market. It also provides information and data analysis of the global market with respect to the segments based on type, end-user, and region. A detailed qualitative analysis of drivers and restraints of the market and opportunities has been provided in the overview section. Additionally, the section comprises a competitive matrix and company profiles along with business overview to understand the competitive landscape in the market. This section of the report also provides market share analysis by key players, thereby presenting a thorough analysis of the overall competitive scenario in the global meningococcal vaccines market.

In terms of region, the global meningococcal vaccines market has been segmented into North America (the U.S. and Canada), Europe (the U.K., Germany, France, Spain, Italy, and Rest of Europe), Asia Pacific (India, China, Japan, Australia & New Zealand, and Rest of Asia Pacific), Latin America (Brazil, Mexico, and Rest of Latin America), and Middle East & Africa (GCC Countries, South Africa, Israel, and rest of Middle East & Africa). The market size and forecast for each of these regions and the mentioned countries/sub-regions have been provided for the period from 2017 to 2026, along with their respective CAGRs for the forecast period from 2018 to 2026, considering 2017 as the base year. The research study also covers the competitive scenario in these regions.

The global meningococcal vaccines market has been segmented as below: