The global market for membrane separation systems is gaining from measures taken for water conservation and from adoption of technology for wastewater treatment for the essential commodity to last for successive generations. Municipal agencies and metropolitan planners in several countries are preparing for the impact in the event of water shortage which is an essential commodity. This is pushing the need for innovations in water treatment technologies, which in turn, is stoking demand for membrane separation systems.

Proving to be a roadblock to the growth of this market are high establishment and operational costs, insufficient lack in emerging economies, and availability of alternate technologies for water treatment. 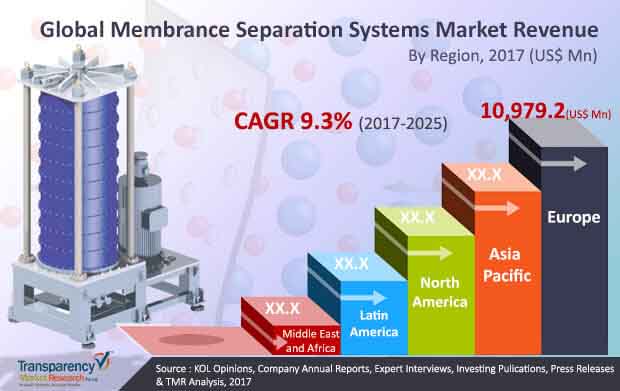 However, ultrafiltration segment is expected to rise at the leading CAGR during the forecast period as the technology is increasingly being adopted in food and beverages and in the vaccine production industry. The ultrafiltration segment accounts as the second leading revenue generator in the overall market. Reverse osmosis is expected to emerge as a significant segment in the global membrane separation systems market on account of its increasing demand in water and wastewater treatment and for the desalination of seawater.

Based on application, the global membrane separation systems market is segmented into environmental, food and beverages, healthcare, and others. Among them, the environmental segment leads the market in terms of revenue. This is mainly because of extensive demand for membrane separation systems from water and waste water treatment industry, rising global population, scarcity of pure water, and rising interest for conservation of essential commodities such as water in developing economies of Asia Pacific. Urban population in East Asia which was reported to be 1.3 billion in 2016 is expanding at a rapid pace. Urban populace that account for almost three times more water and energy consumption than the rural populace is necessitating the adoption of technologies for water reuse to prevent water scarcity situations. Food and beverages is also expected to emerge as a key application segment as membrane separation technology is accepted by several regulatory bodies for its high reliability.

The key segments of the market, based on material include polyethersulfone, polysulfone, cellulose-based, polypropylene, nylon, polyvinyllidene fluoride, polyacrilonitrile, polytetrafluoroethylene, and polyvinyl chloride. The polyethersulfone segment holds the leading share in the overall market. The growth of the segment is driven by its extensive use in healthcare industry for production of monoclonal antibodies and vaccines, and due to its high reliability for protein separation processes.

Geography-wise, North America, Europe, Asia Pacific, Latin America, and the Middle East and Africa are the regions into which the market is divided in this report. Of them, Europe held the commanding share in the membrane separation systems market in 2016.

Membranes find increasing opportunities for use in the purification process of brackish water due to the shortage of pure water. High standards of purity along with strict regulations pertaining to drinking water and discharge of industrial wastewater have resulted in the augmented wastewater and water treatment activities. These processes make use of MF, UF, and RO membranes on a large scale, which is anticipated to drive demand for the system.

Different countries have come up with laws to ensure supply of clean drinking water to citizens, such as the US and countries of European Union (EU). These policies are expected to escalate the processes of water and wastewater treatment all over the world. This factor is estimated to open up the scope of growth of the global membrane separation systems market in the forthcoming years.

The global membrane separation systems market report comprises a detailed elaborate executive summary, which includes market snapshot that provides information about various segments. It also provides information and data analysis of the country’s market with respect to the segments based on technology, application, and material. An elaborated qualitative analysis of drivers and restraints, opportunities, and trends has been provided in the market overview section. Additionally, the section comprises pricing analysis to help understand the competitive landscape in the market. This section also provides market attractiveness analysis in terms of country, thus presenting a thorough analysis of the overall competitive scenario in the global membrane separation systems market.

Based on technology, the market has been segmented into microfiltration, ultrafiltration, nanofiltration, reverse osmosis, chromatography, and ion exchange. The market segments have been analyzed based on efficiency, cost-effectiveness, and preference for various water treatment, food & beverages, and healthcare industries. The market size and forecast for each of these segments have been provided for the period from 2015 to 2025, along with their respective CAGR for the forecast period from 2017 to 2025, considering 2016 as the base year.

Based on application, the market has been segmented into environmental, food & beverages, healthcare, and others. The market segments have been extensively analyzed based on rise in demand from water and wastewater treatment plants, dairy, and biopharmaceutical industries. The market size and forecast in terms of US$ Mn for each segment have been provided for the period from 2015 to 2025. The report also provides the compound annual growth rate (CAGR %) for each market segment for the forecast period from 2017 to 2025, considering 2016 as the base year. On the basis of material, the market has been segmented into polyethersulfone (PES), polysulfone (PS), cellulose based, nylon, polypropylene (PP), polyvinylidene fluoride (PVDF), polytetrafluoroethylene (PTFE), polyacrilonitrile (PAN), and polyvinyl Chloride (PVC). This segmentation has been done on the basis of usage of particular membrane in various industrial processes like desalination of sea water and separation of proteins.

Geographically, the global membrane separation systems market has been segmented into North America, Europe, Asia Pacific, Latin America, and Middle East & Africa. The market size and forecast for each of these regions have been provided for the period from 2015 to 2025, along with their respective CAGRs for the forecast period from 2017 to 2025, considering 2016 as the base year.

The Global Membrane Separation Systems Market is segmented as below: