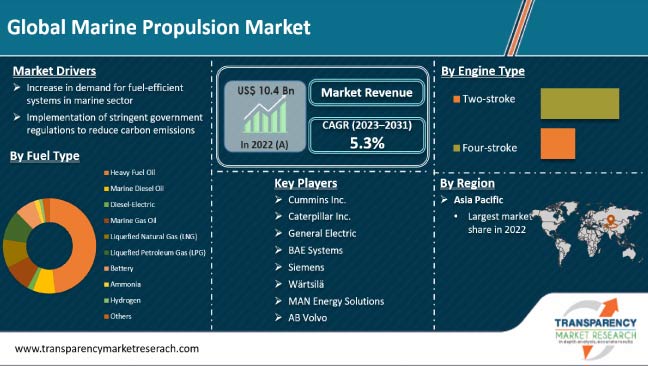 Diesel is the preferred fuel for marine transport. Its price is directly proportional to the price of crude oil. Volatility in prices of crude oil has resulted in a switch from diesel to other propulsion systems. The relatively low price of natural gas and LNG compared to diesel in North America and Europe has attracted investments in LNG infrastructure in these regions. Thus, diesel-based marine propulsion system is projected to lose share during the forecast period owing to the shift toward cleaner fuel and efficient marine propulsion systems. Hybrid and renewable power based new/converted marine fleet is likely to expand at a higher growth rate during the forecast period.

In January 2018, Fairbanks Morse Engine, an EnPro Industries company, was awarded a contract by the U.S. Navy Department for the manufacture and delivery of main propulsion diesel engines (MPDEs). It aims to power LPD 29, which is the U.S. Navy’s 13th San Antonio landing platform dock (LPD) class ship. In August 2017, AB Volvo Penta launched the Volvo Penta D13 1000 marine leisure engine. The newly manufactured leisure engine is highly powered and can also be installed in larger yachts with length of up to 120 feet. In July 2017, AB Volvo Penta acquired Seven Marine LLC, a Germany-based manufacturer of outboard motors. The move is anticipated to help AB Volvo Penta expand its business in the marine sector. In January 2018, Wärtsilä Corporation signed a memorandum of understanding (MoU) with Petrocity, the parent company of the new port facility under construction in São Mateus-ES, Brazil. The company has developed HYTug design with hybrid propulsion that can meet stringent environmental requirements of the new port. In March 2018, Rolls-Royce Plc.’s latest generation of MTU-series 4000 engines equipped with the SCR system for ships successfully completed IMO Tier-III certification tests. This is expected to enhance the company’s footprint in Europe and help reduce NOX emissions in the environment.

Currently, Europe and North America are the key markets for marine propulsion systems. However, Asia Pacific is estimated to emerge as one of the prominent markets for this technology. Highly environment-conscious Europe and North America are projected to lead the global marine propulsion market in the near future. On the other hand, the market for marine hybrid propulsion systems in Asia Pacific is still not as developed as that in North America and Europe. Towage and vessel operators providing services in these regions region are gradually shifting from conventional diesel to hybrid propulsion systems. Numerous attractive technologically advanced models are expected to be introduced in the near future. The marine propulsion market is projected to witness a large number of collaborations between vessel operators and technology developers during the next few years.

Implementation of stringent regulations related to minimization of harmful carbon emissions has propelled the demand for advanced propulsion systems. Increase in seaborne trade has resulted in spillage of marine fuel in the marine ecosystem. Therefore, governments of several countries are funding and supporting development and adoption of the latest technology in marine propulsion systems.

The report includes detailed value chain analysis, which provides a comprehensive view of the global marine propulsion market. Porter’s Five Forces model for the marine propulsion market has also been included to help understand the competitive landscape. The study encompasses market attractiveness analysis, wherein products and application are benchmarked based on their market size, growth rate, and general attractiveness.

The global marine propulsion market has been segmented as follows: