The severity of disregarding the injuries in knees, shoulder, spine or other joints can lead to rupture of ligaments. Excessive stress applied during movements of such body parts can also damage the internal ligaments. Attending to these ligament injuries is important to avoid being crippled or handicapped for life. Medical professionals, particularly surgeons, treating these injuries are highly dependent on the effectiveness of medical devices called ligament stabilizers. Reconstruction of the injured ligament is largely at the mercy of how the patients use these stabilizers, and on how these stabilizers can perform effectively. 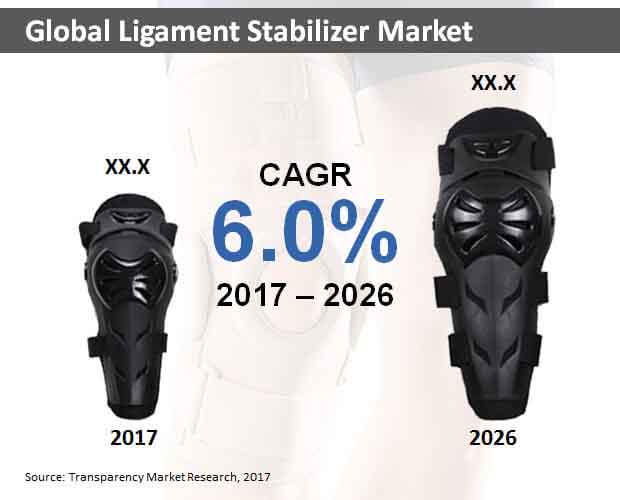 Knee Braces & Supports to Remain in Great Demand through 2026

Ligament refers to a tough fibrous connective tissue band that plays important role in holding bones together in precise articulation at the joints as well as in supporting the internal organs. Any injuries to body joints such as knees, shoulder, spine, or other joints can lead to ligament rupture. Thus, movement of such injured body parts leads to excessive stress, and thereby damage of internal ligaments. Such injuries can be severe if not given proper treatment. Therefore, medical professionals from all across the globe use various advanced tools such as ligament stabilizer during the treatment of joint injuries.

Ligament stabilizer is widely used following surgeries in order to give support to the joints. In recent few years, there is remarkable growth in the cases of accidents as well as sports injuries in all worldwide locations. This scenario has created rise in demand for ligament stabilizers.

Older population is prone to experience various ligament issues due to their weakened knee joints. This aside, ligament stabilizer is also useful for patients dealing with musculoskeletal disorders including Raynaud’s syndrome and tarsal tunnel syndrome, in which patients experience ligament injury. Owing to all these factors, the global ligament stabilizer market is experiencing promising expansion avenues.

The worldwide healthcare sector has experienced extreme burden because of recent COVID-19 pandemic. Due to burgeoning number of COVID-19 patients, hospitals and other healthcare centers across the globe had to restrict their routine patient care and focus on the treatment of the patients affected by the pandemic. This scenario resulted into sudden drop in various surgeries, which caused decreased demand for ligament stabilizer. Thus, players in the global ligament stabilizer market are estimated to experience short-term losses in sales, and thereby revenues. With increasing focus of players toward taking initiatives to strategize moves to come out of this crisis, the ligament stabilizer market is expected to show fast recovery rate in the forthcoming period.

Increasing incidence of knee, shoulder and ankle injuries has propelled the demand for medical devices that can support these body parts effectively. Severity of the injury may lead to ligament tear, for which ligament stabilizers are recommended for use. Leading manufacturers of medical devices are partaking in the global market for ligament stabilizers, and introducing advancements to the existing product lines by considering the changing surgical aspects. Active stabilizers and passive stabilizers are being designed by closely understanding the anatomy of the body part and the biomechanics of the ligaments. These devices are being manufactured to avoid surgical implications in the treatment of injuries. Ligament stabilizers will continue to garner steady demand for playing a key role in knee reconstruction procedures.

The research approach employed in the development of this report has effectively delivered a holistic outlook on the future of ligament stabilizers. Information compiled in the study generates a market consensus assessment with respect to size of the market, direction of market growth, and the latest relevant trends. Revenues procured from leading market players have been studied, and the data has been repurposed in creating a baseline for market size forecasting. Some of the key advantages of this report include:

In addition, the report has also analyzed multiple causative factors influencing the growth of the global ligament stabilizer market. Macroeconomics affecting the adoption and development of ligament stabilizers have been studied, while the report further offers an analysis of cost structure and pricing.

Scope of the Report

By exercising a comprehensive research methodology, analysts at Transparency Market Research have developed this report to cater to the key concerns of market players. Being in constant dialogue with these companies, the data generated by analysts has been authentically validated and the information provided through it aims at resolving the challenges faced by market players. The scope of the report is to enable ligament stabilizer manufacturers in planning informed decisions and strategic steps towards future market direction.

Key sections in the report offer segmental analysis on the expansion of the global ligament stabilizer market. The report has analyzed the global ligament stabilizer market on the basis of type of injury, sales channel, product-type and region. Additional information on country specific market size forecast and cross-segmental analysis is also complied in the report.