As per a report published by the Centers for Disease Control and Prevention (CDC), in the year 2013, around 4,568 cases of Legionnaires’ disease were reported and 6,328 cases in 2017. Also, the cases are increasing at the rate of 13.6% every year.

Legionellosis is a serious respiratory disorder caused by Legionella. The health disorder is serious concern and requires hospitalization and intensive care.

With increase in number of Legionellosis cases, demand for management of disease is also increasing. The disease can only be managed by proper diagnosis and treatment method.

Microbial culture held prominent share of water testing method in the year 2015. It was followed by Polymerase Chain Reaction (PCR). In recent few years, Polymerase Chain Reaction (PCR) segment is likely to emerge as one of the fastest growing segment.  The test provides accurate and time result of the test along with reproducible results. Thus, it is highly preferred bacterial testing method.

Time constraint is main drawback of conventional testing methods. Delivery of result can take more than a week. Also, accuracy of result is also compromised in certain cases. In absence of accurate and timely test report, either treatment is delayed or doctors tend to provide presumptive treatment.  This, in turn, may result in outbreaks.

Hence, people are shifting towards digital and automated test methods. These methods are time saving and produces precise, reliable, and sensitive reports.

Legionellosis is a respiratory disease caused by gram negative Legionella bacteria. At times, the bacteria cause a lung infection similar to pneumonia, known as Legionnaires disease. The bacteria is also capable of triggering a less serious infection called Pontiac fever, which shows signs similar to flu, such as fever, cough, shortness of breath, muscle aches, and headaches.  These symptoms usually begin around one week after being exposed to the bacteria, though in some exceptional cases it can take longer for the symptoms to manifest.

The global legionella testing market is anticipated to grow rapidly in the coming years. One of the key factors driving the growth of the market is the growing aging population. For instance, according to the World Health Organization (WHO), it has been anticipated that the global geriatric population, which was approximately 524 million in 2010, is projected to reach nearly 2 billion by 2050. Geriatric individuals are more likely to contract legionella infections due to their weakened immune systems, making the factor vital for the global legionella testing market. 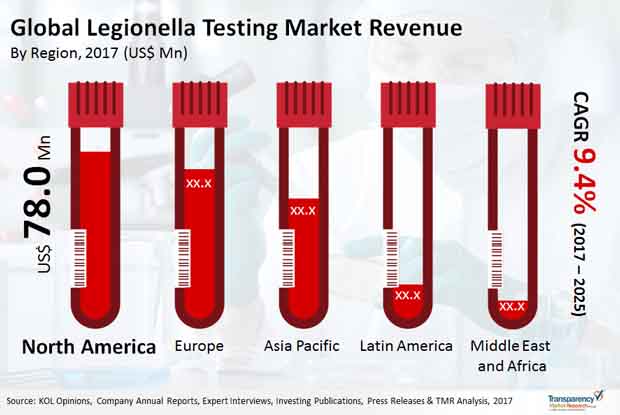 Diagnostic Labs Likely to Dominate Demand due to Growing Investment

By test type, the global legionella testing market is dominated by urinary antigen test (UAT), which is expected to hold a major share in the market in terms of revenue in the 2017-2025 forecast period, as it offers early diagnosis of the disease. The availability of advanced antigen detection facilities has driven the utility of the urinary antigen test to the global legionella testing market.

This report on legionella testing studies the current as well as future prospects of the market globally. The stakeholders of this report include companies and intermediaries engaged in the manufacture and commercialization of various products as well as new entrants planning to enter this market. This report comprises an elaborate executive summary along with a market snapshot providing overall information of various segments and sub-segments considered within the scope of the study. This section also provides the overall information and data analysis of the global legionella testing market with respect to the leading market segments based on major products, key applications, end-users, and geographies.

The market for these segments has been extensively analyzed based on their utility, effectiveness, sales, and geographic presence. Market revenue in terms of US$ Mn and market volume in terms of units for the period from 2016 to 2025 along with the compound annual growth rate (CAGR %) from 2017 to 2025 are provided for all segments, considering 2016 as the base year.

The market overview section of the report explores the market dynamics such as drivers, restraints, and opportunities that currently have a strong impact on the global legionella testing market and could influence the market in the near future. Market attractiveness analysis has been provided in all the sections of the report in order to explain the intensity of competition in the market across different products/materials/end-users/geographies. The competitive scenario among different market players is evaluated through market share analysis in the competition landscape section of the report. The section also includes completion matrix that analyzes the competition among some of the top global players operating in the market. All these factors would help market players to take strategic decisions in order to strengthen their positions and expand their shares in the global market.

Geographically, the legionella testing market has been segmented into five regions: North America, Europe, Asia Pacific, Europe, Middle East & Africa (MEA), and Latin America. Each regional market for legionella testing has been further categorized into major product, applications, and end-user segments considered within the scope of the study. Key country (U.S., Japan, Germany, France, U.K., Australia, Canada, China, Brazil, Mexico, India, etc.) market revenues have also been provided in different regional sections within the report. Market revenue in terms of US$ Mn for the period from 2016 to 2025 along with CAGR % from 2017 to 2025 are provided for all the regions and nations considering 2017 as the base year.

The global legionella testing market has been segmented as below: