Companies in the kinase inhibitors market are collaborating with researchers to carry out single-arm clinical trials, thus revealing the potential of oral JAK inhibitors as therapeutic agents for AA. Potential outcomes suggest that oral JAK inhibitors are effective and substantially tolerable to cases of moderate to severe AA. Researchers in the kinase inhibitors market are increasing efforts to conduct placebo?controlled clinical trials in order to confirm its efficacy and long-term safety.

Recent advancements are being made in anti-angiogenesis receptor tyrosine kinase inhibitors for the treatment of cancer. Angiogenesis is gaining the attention of healthcare companies to develop therapeutic targets for malignant tumors. Companies are achieving success by targeting angiogenesis in various carcinomas. 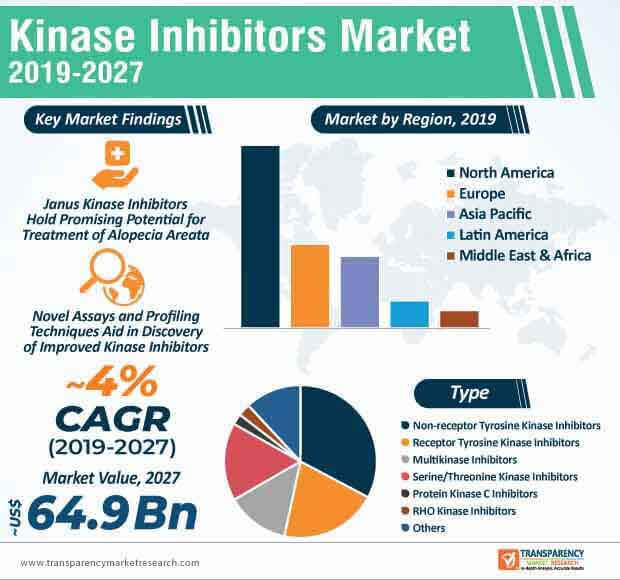 The kinase inhibitors market is expected to expand at a modest CAGR of ~4% during the forecast period. However, innovations such as AI are transforming the market for kinase inhibitors. For instance, the U.S. biotechnology startup Insilico Medicine revealed its deep learning system that is capable of identifying potential treatments for fibrosis with the help of DDR1 (Discoidin Domain Receptor 1) kinase inhibitors.

AI is entering the kinase inhibitors market. Hence, companies should collaborate with biotechnology startups that are capable of integrating target identification with small molecule discovery through AI. Companies are increasing their efficacy in molecular modeling to accelerate drug discovery for fibrosis and other diseases.

Healthcare companies are capitalizing on generative adversarial networks (GANs) to generate novel molecular structures with specified properties. Likewise, deep learning is enabling companies with rapid identification of potent DDR1 kinase inhibitors. Thus, companies are improving their production capabilities to develop a novel drug pipeline of treatment of fibrosis with the help of AI.

Novel assays and profiling techniques are helping companies to develop improved kinase inhibitors for drug development. Discovery of new kinase inhibitors is anticipated to improve biochemical, cellular, and in vivo assays that could offer new therapeutic targets. This is important since oncology is the focus of healthcare providers in the kinase inhibitors space, and research in this field of study is projected to grow exponentially.

Companies in the kinase inhibitors market are increasing R&D to gain expertise in cell signaling for the development of new drugs. The kinase inhibitors market is continuing to grow since the market is largely consolidated with major players accounting to ~68% of the market share. However, developing novel kinase inhibitors poses as a challenge for manufacturers. Hence, manufacturers are collaborating with researchers to acquire a decision-based understanding of kinase biology, cell signaling, and its outcome in various diseases. They are increasing efforts to gain information on biochemical and biophysical assays to examine the potency and selectivity of kinase inhibitors. 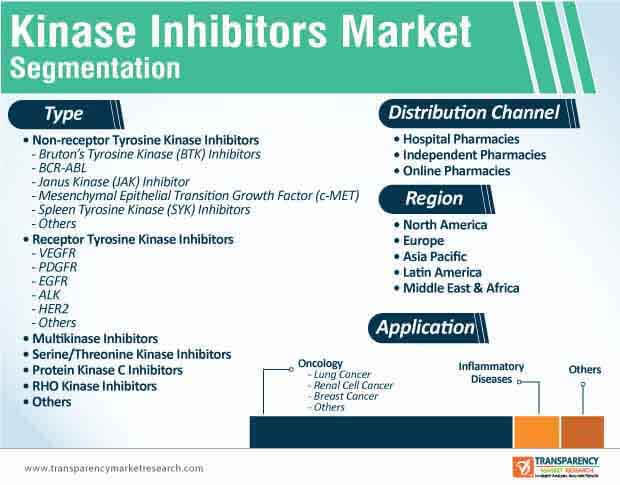 Developers are designing immune-modulatory agents for single and combination therapies for the treatment of inflammatory and central nervous system disorders. Companies in the kinase inhibitors market are developing cell assays, since they are more advantageous than biochemical assays, owing to the former’s representation in physiological situation.

The report includes an elaborate executive summary, along with a snapshot of the growth behavior of various segments and sub-segments included in the scope of the study. Moreover, the report sheds light on changing competitive dynamics in the global kinase inhibitors market. These serve as valuable tools for existing market players as well as for entities interested in participating in the global kinase inhibitors market.

The comprehensive report on the global kinase inhibitors market begins with an overview, followed by the scope and objectives of the study. Following this, the report provides detailed explanation of the objectives behind this study and key vendors and distributors operating in the market and regulatory scenario for approval of products.

For reading comprehensibility, the report has been compiled in a chapter-wise layout, with each section divided into smaller sections. The report comprises an exhaustive collection of graphs and tables that have been appropriately interspersed. Pictorial representation of actual and projected values of key segments is visually appealing to readers. This also allows comparison of market shares of key segments in the past and at the end of the forecast period.

The report analyzes the global kinase inhibitors market in terms of type, application, distribution channel, and region. Key segments under each criteria have been studied at length, and the market share for each of them at the end of 2027 has been provided herein. Such valuable insights enable market stakeholders in making informed business decisions for investment in the global kinase inhibitors market.