The global intraosseous devices market is expanding due to the increasing number of emergency cases and ailments, such as cardiac arrest and trauma. The global intraosseous devices market was valued at more than US$ 361.0 Mn in 2017. It is projected to reach a value of US$ 586.9 Mn by 2026, expanding at a CAGR of more than 5.5% from 2018 to 2026. The global market is expanding at a relatively higher growth rate due to increase in geriatric population, rising prevalence of various diseases and expansion in research, rising number of medical emergency situations, and developmental activities and approaches in healthcare sector in both developed and developing countries.

Intraosseous devices can be used to deliver medications and fluids in an emergency, when there's unavailability of venous access or it can't be quickly established. Initially, intraosseous devices were utilized for pediatric emergencies requiring urgent vascular access. In 2005, the American Heart Association (AHA) and the European Resuscitation Council (ERC) reconsidered their guidelines to incorporate advocating intraosseous infusion access in adults with cardiac arrest when there’s no availability of IV access. During military engagements of the U.K. and the U.S. armies in Afghanistan and Iraq and the Israeli army in the Second Lebanon War, intraosseous access appeared as a viable alternative to IV. The U.S. Army Committee on the Tactical Combat Casualty Care (TCCC) guidelines presently recommends using intraosseous infusion in any resuscitation case in which IV access is not achievable. Manual needles were the first intraosseous devices to be introduced, which are still extensively employed by several practitioners. There are presently several different manual intraosseous needles commercially available. High prevalence of various diseases, such as cardiac arrest, and emergency situations, including trauma, and increasing military engagements have led to an increase in patient population needing intraosseous devices for treatment. These factors are anticipated to drive the demand for global intraosseous devices in the future years. Furthermore, extensive research and technological advancements are estimated to fuel the intraosseous device market. 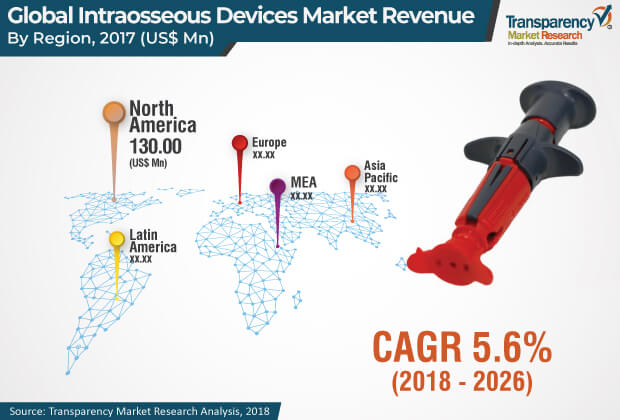 In terms of end-user, the global market has been segregated into hospitals, emergency medical services (EMS), and military. The EMS segment is expected to dominate the market and expand at a CAGR of 6.0% during the forecast period. This is due to the rising number of emergency situations, including road accidents, injuries, trauma, and cardiac arrest, increasing penetration of intraosseous devices, and the availability of well-trained and equipped medical professionals.

Geographically, the global intraosseous devices market has been segmented into North America, Europe, Asia Pacific, Latin America and Middle East & Africa. North America is expected to dominate the global market and account for a prominent share of the global market. The market in the North America is primarily driven by the rapid increase in geriatric population, rise in patient population, high rate of adoption of technological advancements, and increase in prevalence of various diseases. Moreover, increase in awareness among people and the number of players and products coupled with substantial focus on research and development is anticipated to fuel the global intraosseous devices market in North America during the forecast period. The market in Asia Pacific is projected to expand at a rapid pace during the forecast period. China dominated the market in Asia Pacific, it is estimated to expand at a significant CAGR during the forecast period. Increasing population, governmental initiatives taken in healthcare field, and expansion in research and development activities are driving the market in Asia Pacific.

Companies such as Teleflex Incorporated, PERSYS MEDICAL, and Cook, accounted for a major share of the global market in 2017. Strong network with hospitals and distributors, increasing number of acquisitions and mergers, and prominent involvement in research and development, are key factors strengthening the position of these players in the market. On April 3, 2017, Teleflex Incorporated completed the acquisition of Pyng Medical, a medical device company that developed and marketed sternal intraosseous infusion products, which complements the Teleflex Incorporated’s anesthesia product portfolio. Companies are adopting the strategy acquisition and collaboration with parallel companies to improve and strengthen their presence in the global market.

Vascular access is a crucial component of pediatric emergency medicine, and peripheral access in children is usually is tougher as compared to that in adults. Some situations, including cardiac arrest and shock, may make peripheral access impossible owing to peripheral vasoconstriction. This is specifically important, as any delay in creating a venous access may delay medical interventions, and the outcomes of patients is likely to get compromised. Intraosseous access is an extensively accepted approach during cardiopulmonary resuscitation (CPR) of a critically-ill child, in order to achieve venous access. The European Resuscitation Council (ERC) and American Heart Association (AHA) recommend the usage of intraosseous access during CPR if there’s no possibility to immediately achieve peripheral vein access. The medullary spaces serve as a “non-collapsible vein”, allowing effective, safe, and rapid administration of fluids, medication, and blood products. Intraosseous devices are rapidly and effectively inserted; most are successfully placed in less than one minute from the time of opening the package to using the device to administer medication and fluids. Correct placement is established by flow of intravenous fluid or medication into the device without any extravasation of the fluid or medication around the insertion site. Some manufacturers suggest aspiration of bone marrow as another way to establish placement. Once the placement of device is made, flow rates up to 125 mL/min can be attained by using a pressure bag. 2 to 4 mL of 1% lidocaine is introduced before administering a large volume, as a large volume of infusion may generate discomfort in an awake patient.

Acquisitions and collaborations by key players, coupled with new products launch after voluminous research and development activities, which is a key trend for expanding their geographic presence, has been noticed in the last few years. Companies operating in the intraosseous devices market are emphasizing on strengthening their presence across the globe through strategic and calculated acquisitions and collaborations with parallel players functioning in their respective domains and geographies. For instance, on December 2, 2013, Teleflex Incorporated acquired Vidacare Corporation, a provider of intraosseous, or into the bone, access devices. This acquisition complemented the vascular access and specialty product portfolio of the company’s critical care product group.

The global intraosseous devices market has been segmented as mentioned below: