The global influenza medication market is primarily driven by annual epidemic outbreak in developed countries such as the U.S. and flu outbreaks in several regions across the globe.

As per a report published by Centers for Disease Control and Prevention (CDC), in October 2019, 9.7 million cases of influenza had been reported in the U.S. in that particular year.

Global influenza medication market include application of seasonal vaccines. However, in several cases, the flu vaccines may not be efficient for prevention.

The influenza medication market is influenced by several drivers and trends. These factor may bring momentum to demand rate for influenza (flu) antiviral drugs.

Further, rising awareness regarding serious impacts of influenza is one of the key driving factors driving growth of the global influenza medication market. Impact of influenza on human health may result in some other critical diseases.

On other hand, current lifestyle trends may result in development of influenza in significant proportion of the global population. This may emerge as one of most common contagious diseases.

Pregnant women, geriatric population, and people with weak autoimmune system are at high risk of developing influenza. The genetic mutation nature of the virus impels them to undergo consistent change. This has adverse effect on human immunity. This has resulted in research and development of novel therapeutics method and introduction of new influenza medications. This, in turn, is likely to fuel the influenza drugs market.

Moreover, increasing healthcare expenditure and investment in research and development activities are likely to accelerate growth rate of the global influenza medication market. However, adoption of influenza vaccines is interfering with growth of the market.

Influenza medication includes antiviral drugs prescribed for the treatment of influenza. Influenza, also known as flu, is a respiratory disease caused by an influenza virus. It is a viral infectious disease that includes three major types: type A, type B, and type C. The common symptoms of the disorder are cold, cough, fever, and sore throat, which can be severe or mild. Seasonal outbreak of influenza primarily occurs in winter. Most people generally recover fully, but severe complications such as pneumonia can also develop. Initiation of antiviral treatment is recommended for hospitalized influenza patients. High growth of the global influenza medication market is due to unmet medical needs within the annual influenza epidemics along with strong R&D focus resulting in new and advanced treatments and drugs, and increasing demand due to government stockpiling. 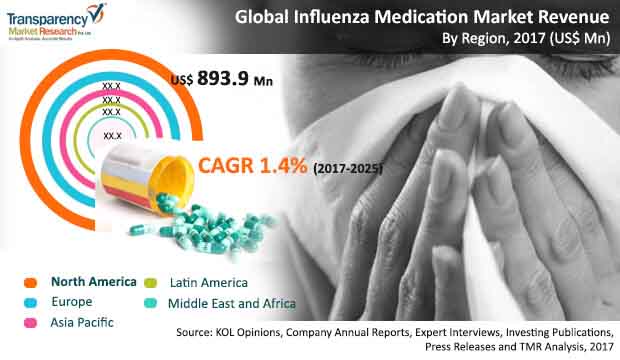 The global influenza medications market has been classified on the basis of three categories, which are by product, distribution channel, and geography (regions & countries). The product category is further sub segmented into zanamivir, oseltamivir, peramivir, amantadine, rimantadine, inosine and others including laninamivir octanoate. Of these, oseltamivir held lead with a share of 48.8% in the global market in 2016. The rising use of oseltamivir in the treatment of flu triggered by H1N1 virus and prophylaxis is one of the key reasons behind the segment’s lead.

In term of distribution channels, global influenza medications market is divided into hospitals, clinics, pharmacies and others. Incidence and prevalence of flu are gradually increasing across the globe. Of these, the pharmacies segment held dominance in 2016. Through the course of the forecast period, growth run witnessed by the segment is likely to remain steady due to the mushrooming pharmacy stores around the world. Besides this, the market is likely to witness lucrative prospects in the hospitals segment.

For instance, According to the CDC, around 5% to 20% of the population is affected with the flu in the U.S. each year. Additionally, an estimated 200,000 people are hospitalized due to flu infection in the U.S. each year; of these 36,000 die due to flu complications. Favorable policies for treatment and prevention of influenza by the government in developed regions. These are the major drivers in the growth of influenza medication market. The market in Asia Pacific is expected to expand at a high CAGR of 1.8% during the forecast period due to availability of low cost treatment and availability of better health care facilities. Patent expiry of key drugs and entry of generics and Side effects of anti-influenza drug therapy are the major restraining factors affecting Influenza medication market.

By geography, global Influenza medication market has been segmented into major five regions: North America, Europe, Asia Pacific, Latin America and Middle East & Africa. In 2016, North America and Europe accounted for the largest share of the Influenza medication market followed by Asia, Latin America, and Middle East & Africa. The U.S. dominated the Influenza medication market in North America, accounting for around 49.8% share in 2016. North America leads the global market with a major contribution of the U.S. owing to increasing adoption of advanced and high-cost drug therapies, increased treatment rate, and favorable reimbursement policies in the country. Europe and Asia Pacific are projected to be moderately lucrative markets from 2017 to 2025. Increase in the number of public awareness programs for prevention and diagnosis of chronic diseases such as influenza has significantly reduced the prevalence of influenza in Europe. In Europe, demand for influenza medication products is the maximum, with a major share held by the inosine product segment. Asia Pacific is expected to dominate the global market, due to major contribution from developing countries. China and India are highly populated countries with the maximum number of influenza patients making them major contributor to the growth of the market in Asia Pacific.

This report on Influenza Medication Market studies the current as well as future prospects of the market globally. The stakeholders of this report include companies and intermediaries engaged in the manufacture, commercialization, providing services of Influenza Medication Market products such as Zanamivir, Oseltamivir, Peramivir, and others as well as new entrants planning to enter this market. This report comprises an elaborate executive summary along with a market snapshot providing overall information of various segments and sub-segments considered in the scope of the study. This section also provides the overall information and data analysis of the Global Influenza Medication Market with respect to the leading market segments based on products segment, distribution channels, and geographies.

Based on the product type, the Influenza Medication Market has been segmented into: Zanamivir, Oseltamivir, Peramivir, Amantadine, Rimantadine, Inosine and Others (laninamivir octanoate, etc.). Each of the market segments have been extensively analyzed based on the market related factors such as increasing demand of Influenza Medication Market products worldwide, and technological advancement. Moreover, historical year-on-year growth have been taken into consideration while estimating the market size. The market size and forecast in terms of US$ million for each segment has been provided for the period from 2015 to 2025. The report also provides the compound annual growth rate (CAGR %) for each market segment for the forecast period from 2017 to 2025, considering 2016 as the base year.

The market overview section of the report explores the market dynamics such as drivers, restraints, and opportunities that currently have a strong impact on the Influenza Medication Market and could influence the market in the near future. Market attractiveness analysis has been provided in the market overview section in order to explain the intensity of competition in the market across different geographies. The competitive scenario among different market players is evaluated through market share analysis in the competitive landscape section of the report. All these factors would help market players to take strategic decisions in order to strengthen their positions and expand their shares in the global influenza medication market.

Geographically, influenza medication market has been segmented into five major regions: North America, Europe, Asia Pacific, Latin America, and Middle East and Africa. The market size and forecast for each of these regions has been provided for the period from 2015 to 2025, along with their respective CAGRs for the forecast period from 2017 to 2025, considering 2016 as the base year. The report also provides with market size and forecast for major countries in the respective regions. A detailed qualitative analysis of factors responsible for driving and restraining the market growth and future opportunities has been provided in the market overview section. This section of the report also provides with market attractiveness analysis, Porter’s five forces analysis, and market share analysis by key players, thus presenting a thorough analysis of the overall competitive scenario in the Global Influenza Medication Market.

The global influenza medication market is segmented as follows: