Several ongoing drug development projects signify increased reliability of patients on inflammatory bowel disease (IBD) treatment. Based on disease indication, a study published by Transparency Market Research (TMR) reported that, therapeutics for ulcerative colitis are projected to have a relatively wider patient pool than Crohn’s disease, and that their collective sales will reflect on the healthy growth of the IBD (ulcerative colitis and Crohn’s disease) treatment market.

Numerous non-profit institutions along with the governments of various regions are found taking initiatives to educate individuals regarding IBD through campaigns and workshops, which is progressively increasing the patient base for the IBD (ulcerative colitis and Crohn’s disease) treatment market. Besides the informative approach of public organizations, privately-held pharmaceutical companies sense the lucrative landscape that the IBD treatment market is, and are making profits by addressing unmet treatment needs through the development of effective therapeutics.

In the future, the recent development of anti-adhesion molecules will serve as an open ground for market players to introduce new formulations, and target patients who fail to respond to traditional therapeutics. That being said, considering the underlying opportunities that market players are likely to explore to remain as patient-centric as possible, the TMR study projects an above-average growth of the IBD (ulcerative colitis and Crohn’s disease) treatment market, at an estimated CAGR of ~6% during 2019-2027 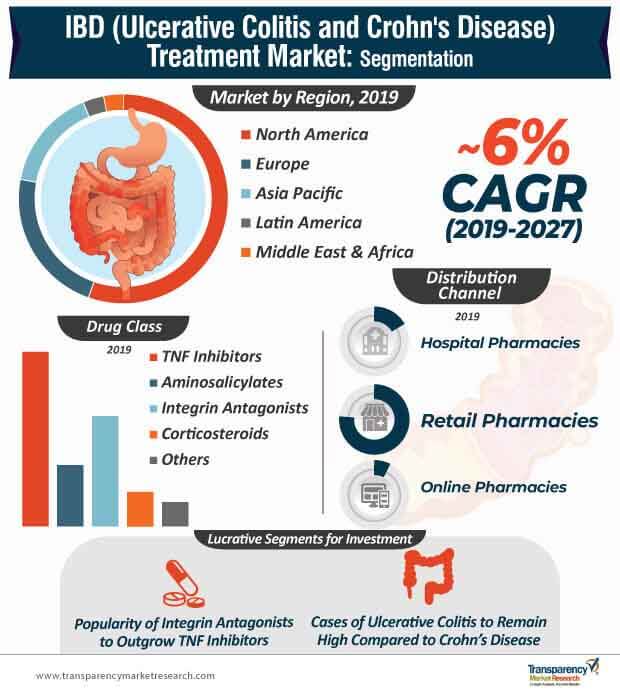 In the era where consumers tend to resonate more with online distribution channels, surprisingly, ~76% of the total sales of IBD treatment therapeutics are projected to arrive from retail pharmacies, in 2019, which was ~75% in 2018, and is likely to grow to ~78% by 2027. The limited popularity of online pharmacies narrows down to warning letters issued by the U.S. Food and Drug Administration Agency regarding potentially dangerous prescription drugs sold by some rogue online channels. However, a wide distribution network, 24X7 accessibility of retail pharmacies, and one-to-one consultation in cases of absence of primary care are the key influencers leading to high sales, implying that, a distribution partnership with these channels could amplify sales prospects.

The IBD (ulcerative colitis and Crohn’s disease) treatment market in North America is driven by continuous development led by key pharmaceutical companies, as well as increased government funding to underpin the development of better therapeutics. Key companies operating in the region are focusing on the development of branded drugs, while trends reported in TMR’s study suggest that, developing countries in Asia Pacific will witness an increase in the development of biosimilar products. In order to ensure the efficiency of these drugs, several countries such as Australia, Japan, India, China, South Korea, and Malaysia are establishing regulatory norms and testing standards for the approval of biosimilar products.

Irrespective of the severity of Crohn’s disease, corticosteroids are deemed effective in inducing disease remission. However, these drugs fall short in preventing flare-ups. To add to that, side-effects related to their long-term use implies that, these drugs cannot be used as continuous therapy, and their patent is likely to expire in 2020.

Besides this, even Remicade of Johnson & Johnson’s and Humira of Adalimumab faced patent expiration. Frequent instances of patent expiration are unfolding sales opportunities for generic products, and several players are scrambling toward the development of these drugs. Zydus Cadila, a key player, accounting for ~40% share in the ulcerative treatment market, illustrated this shift in 2017. The company announced the launch of a generic version of Lialda® in the U.S. In 2018, Teva Pharmaceutical Industries Ltd. also announced the addition of a generic version of Lialda® to its generic portfolio.

The growing popularity of generic drugs is projected to instigate more players in the IBD (ulcerative colitis and Crohn’s disease) treatment market to introduce generic versions of branded drugs in the future. In addition, advanced versions of generic drugs, biosimilars, are coming down the pike in the IBD treatment market, which is likely to upkeep the interest of market players toward the introduction of new products. 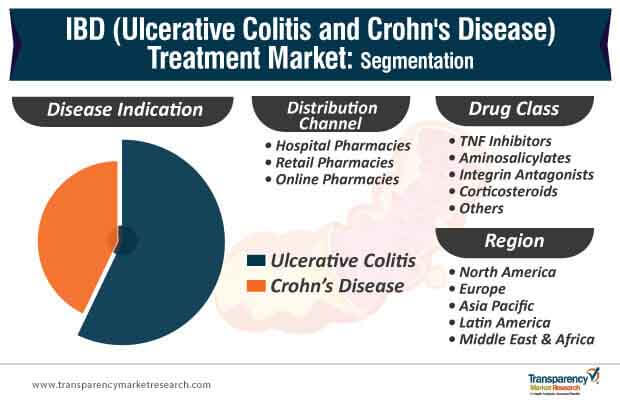 Though analysts of the TMR study infer from the analysis, that the IBD (ulcerative colitis and Crohn’s disease) treatment market will grow at an above-average pace, they opine that, high-cost concerns could hamper the sales of therapeutics. However, the introduction of reimbursement plans to cushion healthcare expenditures will lead to positive sentiments among patients toward effective treatment.

Investments in TNF inhibitors will help achieve high RoI, since physicians tend to prescribe these drugs for the treatment of moderate to severe ulcerative colitis, while potential opportunity through the development of anti-adhesion molecules will boost the adoption of integrin antagonists.

Analysts recommend that, channelizing sales through all the distribution channels – online, retail, hospital pharmacies - will help ease the efforts of companies as far as acquisition and retention of consumer base is concerned.

For reading comprehensibility, the report has been compiled in a chapter-wise layout, with each section further divided into small sections. The entire report comprises an exhaustive collection of graphs and tables that are appropriately interspersed in the entire compilation. Pictorial representation of actual and projected values of the key segments is visually appealing to readers. This also allows comparison of the market shares of key segments in the past and at the end of the forecast period.

Global Inflammatory Bowel Disease Treatment Market is segmented as given below: